Horsham District Council does not care about cycling

If you search for “Cycling” on the Horsham District Council site, you will find that it is classified as a “Sporting Activity” under “Leisure and Tourism.”

That serves as useful background for what follows.

In 2008, Horsham District Council, along with the Horsham District Community Partnership (HDCP), commissioned a review of cycling in Horsham. This was in response to a 2007 recommendation, from HDCP, that an assessment was needed of the gaps in the Horsham cycle network (it would surely have been quicker to look for where the ‘network’ actually exists at all, rather than looking for the gaps – but perhaps that is just nit-picking on my part), with the goal of improving the safety and attractiveness of cycling in the town.

The review, duly funded, was carried out in 2008 by an independent consultancy – Transport Initiatives, of Brighton – and was finally presented for approval to the cabinet of Horsham District Council on the 2nd April, 2009. It can be found in the appendix of the minutes to that meeting, here (beginning p.194).

The review contains a total of 235 separate recommendations for improving the safety and attractiveness of cycling in Horsham. Some of these are ranked as “Practicality – 4”, which according to the Review, means that the measures

May be desirable but may also be impractical/very difficult to implement, or have negative outcomes beyond the area to be treated.

I wouldn’t expect Horsham District Council to leap into action and carry out these kinds of measures – they involve, for instance resignalling junctions, or changing gyratories, and would probably also involve the consent of West Sussex County Council.

1 – Relatively inexpensive to introduce in both design and implementation, and should provide good return for minimal cost

That is, these are simple, cheap measures, that will almost certainly encourage more cycling and walking, and provide value for money.

The big question is, in April 2011, two years since the Horsham Cycling Review was presented to the Council, how many of the 235 separate recommendations have been implemented?

I’m not joking. (In fact I’m being slightly generous).

The inescapable conclusion is that Horsham District Council does not care about cycling as a means of urban transport. The facts are plain – it has been utterly neglected for decades in the town’s planning, and, on the evidence of the response to this Review, nothing is changing. Cycling is just something you do at weekends, when you attach your bicycle to your car and drive off to a nice quiet bit of countryside, and pedal around, before driving back. It is plainly not considered as a solution to congestion, pollution, the costs of continually repairing and updating the road network, or childhood obesity – to name but a few. Or even just a way of making my town a more pleasant place to live.

That is desperately sad.

Anyway, I leave you with a small example, one of well over 200 Horsham Cycling Review recommendations that have not currently been implemented.

Here is the cycle track on Depot Road, last weekend, with the school in the background, beyond the car park. Depot Road itself is currently classed as “CSNA 3” by the Review, meaning that you effectively need to have achieved Bikeability Level 3 to cycle safely on it. 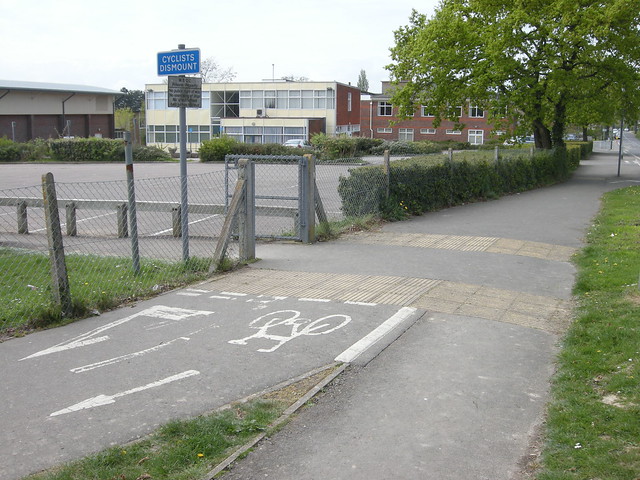 The reasonably good, but short and difficult to access, off-road cycle lane here simply comes to an end (with a helpful “Cyclists Dismount” sign), some distance from the school entrance. As you can see, all that would be needed here is for a gap to be constructed in the fence, and for one of those parking bays to be removed – children can then cycle all the way to the school entrance, rather than being forced to dismount some distance from it.

1 Response to Horsham District Council does not care about cycling