Don’t worry if a driver is beeping at you. In fact, it’s good. It means the driver is aware of your presence, and has seen you.

I may not have the wording exactly right, but the above is the essence of what my Bikeability instructor told my group about the importance of riding in the ‘primary position’ – that is, in the path of cars behind you – during our first lesson last week.

A bit of history. The original RoSPA ‘Cycle Proficiency Test’ used to teach that you should cycle at the edge of the road, ensuring the maximum amount of distance between you and a passing car. (I think it is this advice that has led countless drivers to believe that there is a rule that cyclists should be ‘over to the left’ at all times, despite there being no such instruction in the Highway Code.) The ‘Bikeability’ course, which has superseded this ‘Proficiency’ test, has radically changed this advice, largely because, I suspect, motorists were increasingly choosing to pass closer and closer to cyclists. Cycling ‘over to the left’ was fine when the roads were less busy, when there was less street furniture, and when drivers were generally far better behaved towards cyclists (perhaps because roads were less busy, and it was easier to behave better). But unfortunately, that kind of positioning meant that there would always be a nice car-sized gap for a driver to squeeze through, regardless of the situation. And as drivers became more impatient and less aware of how dangerous it is to pass close to cyclists, and as traffic became heavier and street furniture increased, so that ‘keep to the left’ advice came to be seen as something of a liability.

And so arrived ‘assertive cycling’, which grew out of John Forrester’s book Effective Cycling, published perhaps not coincidentally in 1976, a time when traffic volumes were rapidly increasing, along with motorists’ impatience. John Franklin’s Cyclecraft is pretty much a direct adaptation of this advice for the U.K., and has become canonized, official government advice for how children and adults should cycle on the roads.

The argument for more assertive ‘primary’ positioning that lies at the heart of much Cyclecraft advice is that it removes the temptation to overtake a cyclist in places where it would be unsafe – in the face of oncoming traffic, for instance, or at pinch points, or junctions.  The cyclist simply prevents the overtake by putting themselves in a position where they would have to be driven over for the motorist to get past.

Now, I think this approach generally works. Most drivers are not going to drive over me. Some of them may beep at me, or get impatient, but they are not homicidal. As my Bikeability instructor so cogently put it, they are now aware of me, and by the act of beeping, have made it clear that they are not going to pass me – they are simply taking out their frustration at being ‘held up.’ But possibly one of the most serious faults with the primary position is that a minority of motorists will still be willing to squeeze past, at all costs. To this hardcore of lunatics, a cyclist’s positioning is no deterrence at all, and taking an assertive road position with these drivers actually ends up increases the cyclist’s vulnerability. Take a look at these two videos –

In the first, a strong position approaching a pinch point does nothing to stop the overtake, and actually results in the car nearly striking the cyclist. In the second, a strong position simply has to be abandoned as it becomes clear that an approaching vehicle is simply not going to slow down, and would have passed with inches to spare, at speed, if the cyclist had remained assertive.

To repeat, I think that as things currently stand, taking the ‘primary position’ will probably decrease the overall risk a cyclist faces, because it encourages more consideration from the majority of drivers. But in a minority of instances, it actively increases the danger. Obviously it is hard to weigh up the relative advantages and disadvantages of the primary position, vis-à-vis the old ‘keep to the left’ advice – but if the number of impatient and outright dangerous motorists increases, I think it is almost certain that the primary position becomes less and less safe. This becomes clear if you look at a country like New Zealand, where driving standards are very much lower than in the UK. As an expat UK cyclist observes, in reply to a question about why his positioning on New Zealand’s roads is not the more assertive ‘primary’ positioning,

You have to understand New Zealanders’ hate of cyclists and experience their attitude to really understand my road position. I am from the UK so totally understand where you are coming from, I have read Cyclecraft and think it is great for a Country with reasonable driving standards and tests and where you need a full licence to drive a car, not so good for New Zealand. I have even been told by the Police that I should be “in the gutter, because that’s where you belong.” There are so many cyclist haters and drunks on the road that you really must be carefully about riding further right.

In other words, you are likely to simply be run over if you position yourself in the path of passing cars. ‘Cyclecraft’ becomes increasingly redundant with decreasing driving standards. And this hints at a deeper truth about assertive cycling – it is a form of gambling that relies on an assessment of the proportion of safe and patient drivers that you will encounter on a day-to-day basis. If the odds change, like they do in New Zealand, then perhaps it’s not a wise bet. I am not the only cyclist who has noticed this.

Vehicular cycling and taking the primary. Great for cycling on hypothetical roads with drivers who aren’t idiots. Not so great in the real world. And as for the elderly, very young, or those less willing to be assertive and fight for space on the roads whilst taking abuse? Well they simply have to succumb to the law of the jungle and accept that cycling just isn’t for them.

And this brings me to the other problem I have with the ‘primary position’. No-one seems to have told U.K. drivers about it. Putting yourself out in the middle of the road can, in my experience, appear to some drivers as an act of deliberate provocation. They don’t have a clue what you are doing.

Like the driver of the silver Volkswagen Passat, A6 FLP, that I encountered on St Leonards Road in Horsham, just after I took this picture. 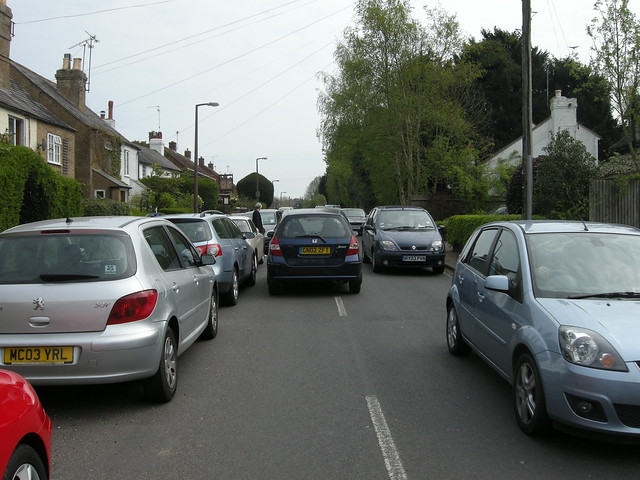 The cars on the left are parked. I am stationary behind the car ahead, while we wait for oncoming traffic to clear. As we move off, and I remain in an ‘assertive’ position in the road, away from the parked cars to my left, I hear some angry revving behind me, before my Passat driver roars past with inches to spare.

As is so often the case with impatient drivers, this gentleman was merely pulling in a few yards further down the road. I stopped alongside him, informing him that his driving was needlessly hostile, only to be met with a barrage of nonsense about my ‘cycling in the middle of the road.’ All the responses I had, about staying out of the ‘door zone’, the importance of ‘primary position’, fell on deaf ears. It was like I was speaking a foreign language.

The U.K.’s official safe cycling strategy can appear perverse and unreasonable to the average motorist – because they haven’t been told about it. The only people who know about ‘Cyclecraft’ are a tiny minority of the already tiny minority of people who cycle, those cyclists who have chosen to adopt the professional advice contained within it.

In the past, we used to see excellent safety campaigns like this –

‘Steer clear of bikes.’  The emphasis is on making sure that the driver gives cyclists (who appear to be cycling over to the left) sufficient consideration.

Today the emphasis has changed. Now motorists aren’t expected to look out for cyclists, as a matter of course, or to consistently give them room. That is, apparently, too hard. So the onus has shifted to the cyclists to force motorists to steer clear of them, by putting themselves in their path. It is now up to cyclists to ‘make themselves visible’, by adopting a road position that, at first glance, appears insane. And if that wasn’t bad enough, nobody seems to have told motorists about this new official policy – a recipe for hostility.

As I cycled off from my encounter with Mr. Passat, I found myself wondering whether it is worth it, cycling in the way of motorists. Perhaps it would be better to accept the risk of a ‘dooring’ from a parked car, rather than have to put up with the honking, yelling and belligerence of ignorant drivers.

U.K. cyclists – between a rock and a hard place.