“Why wouldn’t you ride a bike?”

My partner has not ridden a bicycle for over 20 years. The reasons for this are manifold, but in essence, they boil down to the roads she would have to use being too unpleasant to ride on, in combination with the perceived difficulty of riding a bike in her ‘normal’ clothing. Until she met me, she had seen ‘cycling’ as something that was only carried out by hooligans on the pavement, or by ‘cyclists’, strange individuals who put on specialized clobber, and adopted strategies to survive on the road, which she saw as ‘the car’s environment.’ That she held this view, despite never having driven a car herself, only hints at the pervasiveness of this negative view of cycling, and cyclists, amongst the general public.

Well, she has now broken her cycling embargo.

Her very first journey, in two decades, was on a busy urban street, near the centre of a bustling city of 300,000 people,  a street undergoing roadworks, with buses, vans and other large vehicles overtaking us.

Hardly the best environment to start a nervous and wobbly ride, you might think, but of course, that street was not in Great Britain. It was in Utrecht, in the Netherlands.

Below is the video of that first ride, on Biltstraat. My partner is behind me.

We are separated completely from the main traffic flow, and can progress serenely at a modest pace. It was entirely relaxed. In fact the only thing we actually ended up worrying up was the rather large dog that appears at the 55 second mark – British dogs are often rather hostile to bicycles, but Dutch dogs seem to be more used to them.

Having paused for a coffee, we then discussed what to do next. I had only anticipated cycling up and down a few streets, just to give her a flavour, but having gained her confidence, we actually discussed doing something I hadn’t really anticipated would be possible – cycling all the way out of the city, into the countryside, to a pancake house she had read about in our guidebook, at Rhijnauwen, near Bunnik.

Would this be possible for a novice, who hadn’t ridden a bicycle for decades?

Our first challenge was to negotiate the ring road.  As we approached the large roundabout at then end of Biltstraat, my partner said, quite anxiously, ‘This looks dangerous!’ And indeed it did. There was no way she was going to cycle anywhere near it. But having reassured her that we would not have to worry about traffic at all, we continued, as shown below.

Easy. We then found ourselves alongside a busy dual carriageway, on this path. 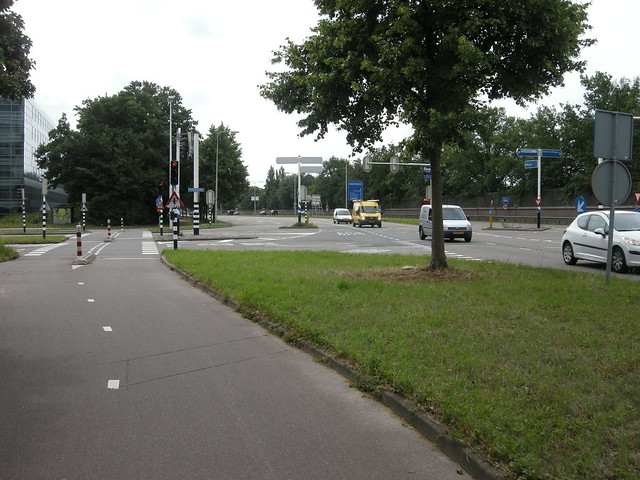 The very idea of us negotiating this kind of road in Britain, given her nervousness, would be ludicrous, but cycling along it here was wonderful.

Eventually we entered the suburb of Oost. Here it was slightly more challenging. The cycle paths were not separated from the road. 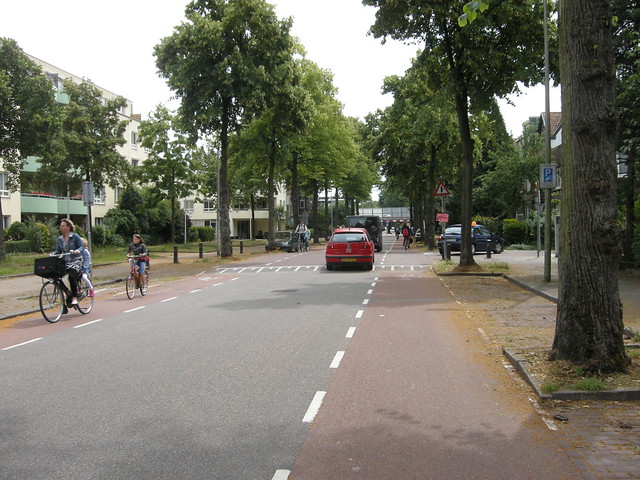 However, the motor traffic was low in volume, and considerately driven. There were plenty of other cyclists around, and the path was wide enough to give my partner confidence. A van actually followed us as we crawled along (well, ‘crawled’ according to my ‘British’ urban pace) for a few hundred yards, before turning in behind us, rather than risking a pointless overtake. A revelation.

Back onto separated paths – 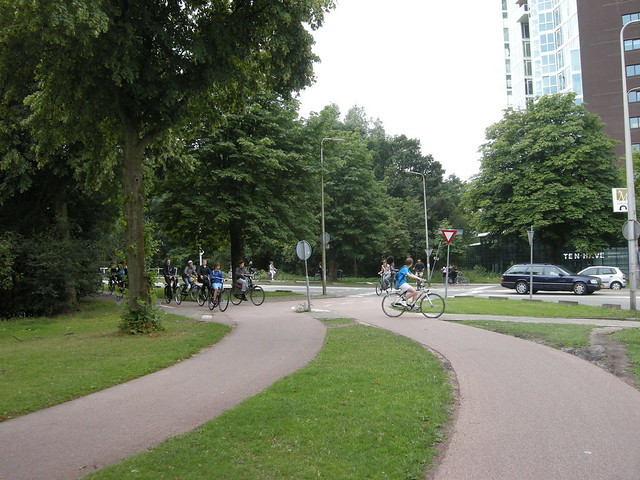 We then found ourselves on this access road, alongside the main road, leaving the city limits. 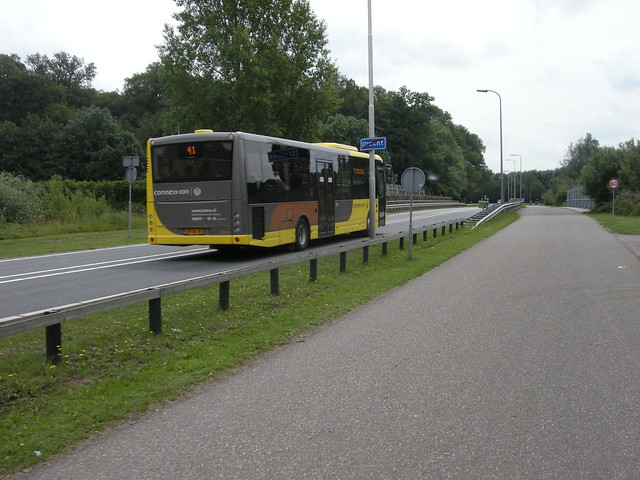 We only encountered one motor vehicle – the van seen in the photo below – during the couple of miles we cycled along this access road. 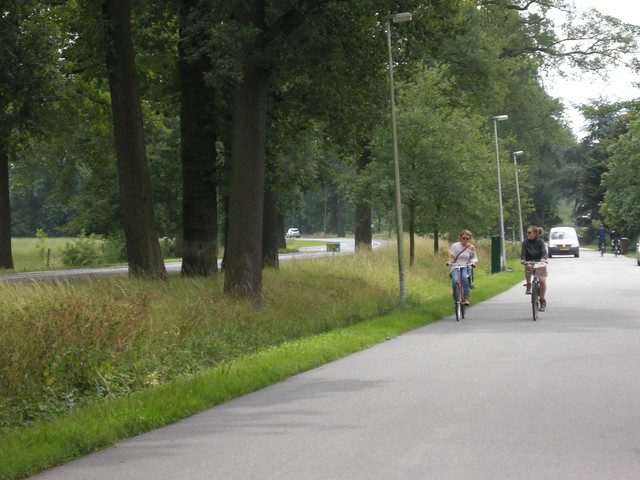 Plenty of other cyclists though, mostly teenagers, cycling into the city. 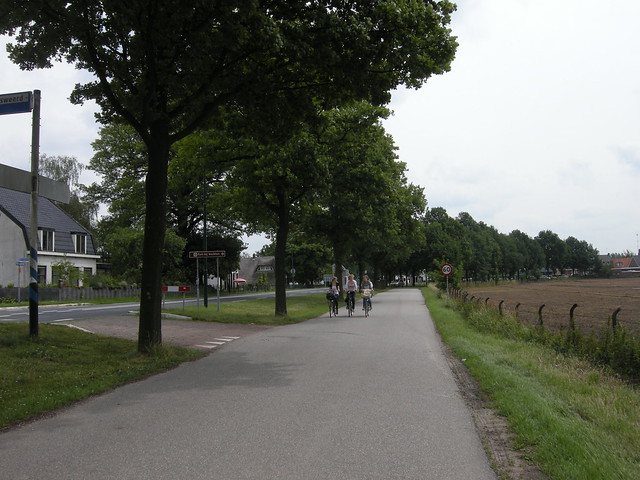 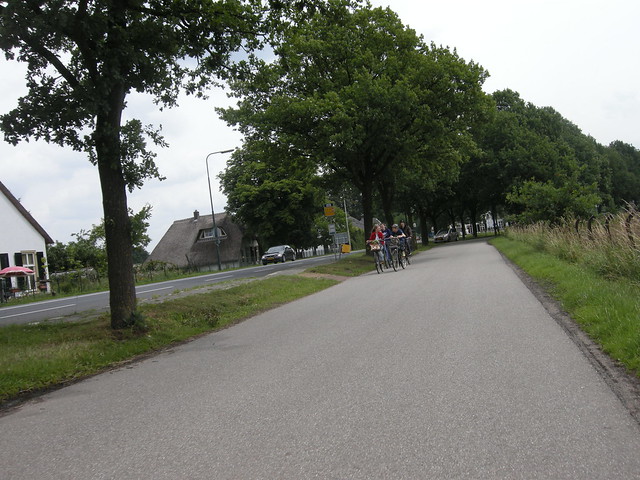 Eventually, as we neared Bunnik, our access road switched sides of the main carriageway. 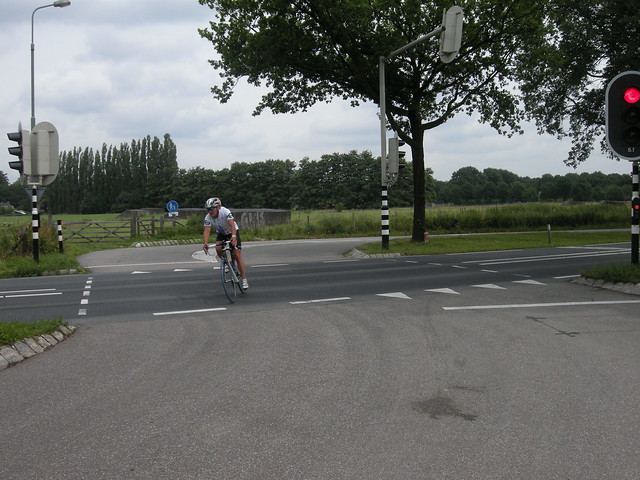 A ‘lycra cyclist’ happily used this path. We only had to push the yellow button on the post to the right, and the lights changed instantly (there also seemed to be an induction loop that our bicycles set off). A large articulated lorry was forced to wait as we crossed to the path on the other side.

Another mile or so of cycling on quiet rural roads, and we were at our destination. 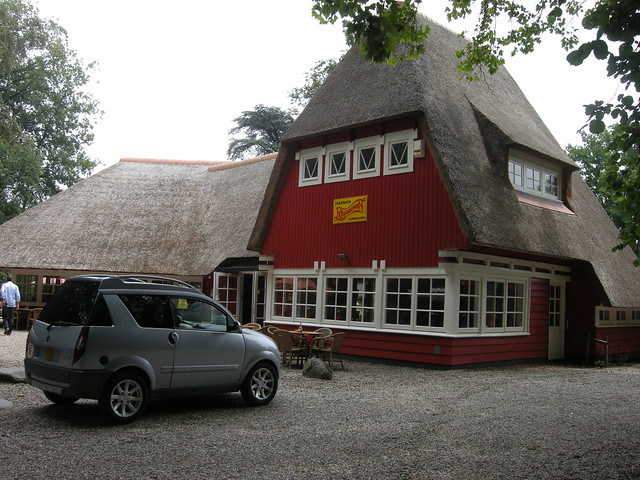 We had negotiated our way out from the very centre of the city, on bikes, to a country house, and it had been remarkably easy. 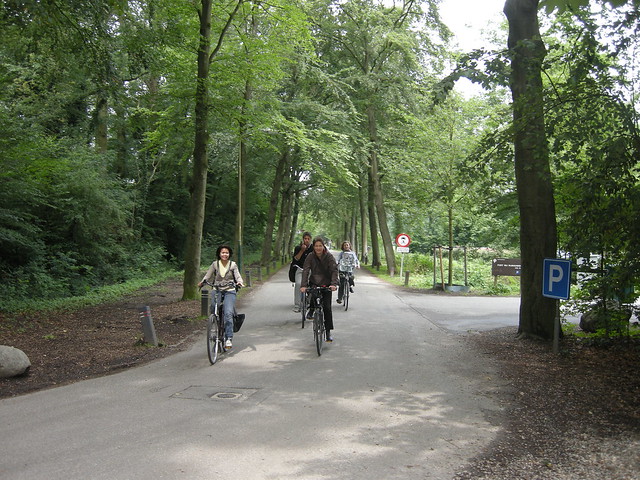 As we saw these other cyclists arriving at the pancake house, my partner – perhaps a bit exhilarated at having made it to our destination with so little difficulty – turned to me and said,

‘Why wouldn’t you ride a bike?’

And this was coming from someone who had not been anywhere a bicycle for two decades.

Why wouldn’t you, indeed?

Make cycling an obvious and easy way of getting about, and people will do it. 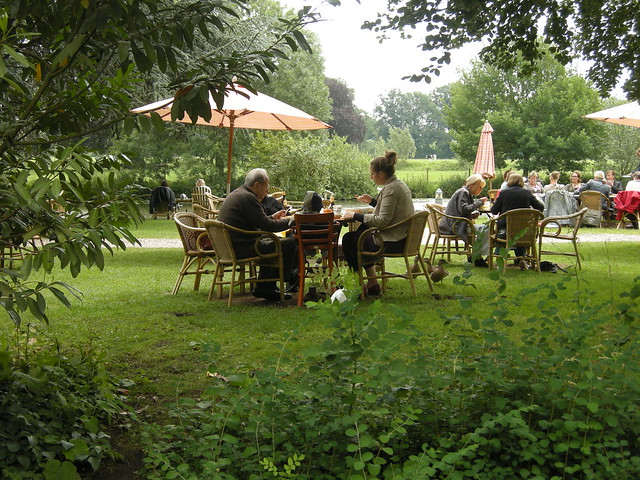 This entry was posted in Cycling policy, Infrastructure, Road safety, The Netherlands. Bookmark the permalink.

14 Responses to “Why wouldn’t you ride a bike?”