I spotted this in my local paper, the West Sussex County Times.

Get ready for Bike Week!

Research shows that 77 per cent of people own a bike yet only 14 per cent use them regularly, so this year ‘Team Green Britain’ Bike Week, from June 18 to 26, is encouraging people to dust down and liberate the thousands of once-loved bikes languishing in sheds around the country. Switching journeys to bike makes sense, as it can save you lots of money and get you fit. And the environmental benefits of cycling are great, too. Bicycles are true zero-carbon vehicles and the average four-mile commute should be easily achievable for most people – and would take less than half an hour. Doing this alone would cut the average individuals’ carbon emissions by as much as seven per cent. Don’t delay, get on your bike today!

Do they honestly think that an individual will, upon reading the above spiel, drop his paper, exclaim

“Wait a minute! Riding a bicycle can make me fit? And save me money? And I won’t emit any carbon? Why didn’t anyone tell me!”

before dashing madly out to his shed, liberating his bicycle, and pedalling it furiously into town?

Obviously not. People already know that riding a bicycle makes them fit (that’s why quite a lot of them strap mountain bikes onto their cars, so they can go off to quiet bits of countryside and ride around on them). People already know that riding a bicycle is cheap, and ‘good for the environment.’ So these cannot be reasons why people are not riding bikes.

But this is, seemingly, the official line from the organizers of ‘Team Green Britain’ Bike Week – professional cyclist Ed Clancy has been roped in to parrot, identically, this very same guff –

The message is wrong. It doesn’t matter who is delivering it.

But maybe there are other stupid reasons why people aren’t getting on their bikes. Warwickshire County Council seem to think it’s because they want to ride tandems and tricycles instead.

As part of Bike Week, the county council’s Sustainable Travel Team is holding a series of bike themed events including Come Try A Bike day on Thursday (June 24). The event is open to anyone who has not rode a bike for some time, or just want to try a new type of bike.

… Klaus Stüber from Germany is bringing along his innovative Taga ‘pushchair’ bike which he uses to transport his two daughters to nursery school. He said: “It is not a bike nor a pushchair but rather a totally new way to move around and spend quality time with your child. The three wheel design makes it a much safer ride than with a regular bicycle.

Nicola Small, Warwickshire County Council’s Sustainable Travel officer, said: “There are lots of bikes out there now to meet the different requirements of individual circumstances – from tandems, to electric bikes, to fold up ones and now even a bike that turns into a double buggy! There is basically a bike for everyone – it is just a case of looking for something that meets your needs.

Perhaps there are countless Warwickshire residents who are desperate to get out on the roads on some form of pedal-powered device, but have been prevented from doing so until now because they just haven’t found the right tricycle, tandem, or converting Transformer bike-buggy device. Indeed, I am sure we will see cycling levels skyrocket in Warwickshire as a result of the council’s sterling efforts to pair these desperate individuals up with the bizarre bicycle-type… thing they have long been searching for.

The inescapable conclusion is that the organizations responsible for promoting bicycle use are just not getting it – they are completely deluded about what the problem is. We have, in David Arditti’s words, a

total, nutty disjunction between the promotion and propaganda surrounding cycling in UK, and the reality of what those who attempt to cycle discover on the roads.

The reason people aren’t riding their bikes is not because they’ve got a puncture, or because there’s a general maintenance problem. There are things called ‘local bike shops’, which anyone who really wanted to get on their bike can quite easily use to get these minor problems fixed, at little expense.

The real problem, of course, is the environment. Or, as David Arditti puts it,

Using a bicycle on Britain’s roads is unattractive. Survey after survey shows that what people want is not better clothing, training advice, tricycles, fixed punctures, or even – ludicrously – being made aware about how a bicycle can make you fit, and save you money. Instead

The graphs show that while there is a widespread opinion among cyclists and non-cyclists that some form of cycle specific route would encourage them to cycle more, the preference is clearly for off road facilities. Both groups felt that these would be more likely to achieve a higher growth in cycling levels.

We need an improvement in the environment for cycling, so that people feel safer, and cycling becomes a more pleasant experience. This is the elephant in the room, that for some inescapable reason is not being addressed in all this rather breathless Bike Week exhortation. No amount of glossy promotional hype is going to overcome this fundamental barrier, and for that reason, this Bike Week, and every subsequent Bike Week, is consequently going to be doomed to failure, unless, of course, we start to address the real reason why people don’t ride bikes. 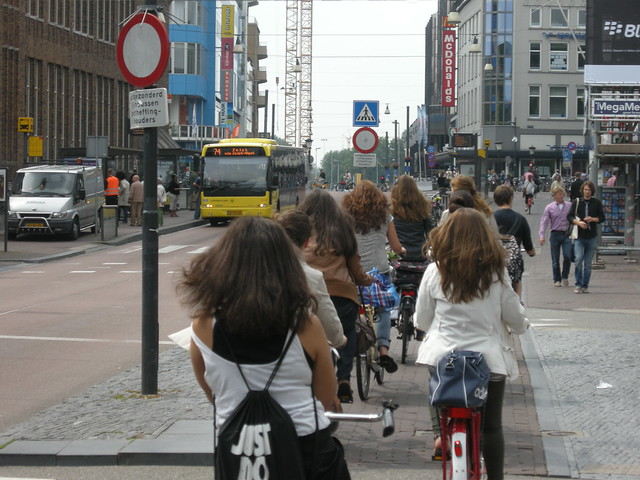 Utrecht, June 15th 2011 – what cycling in Britain could look like, if we started addressing the cycling environment