East Street, Horsham – A shared space that can’t be shared?

Back in February, I wrote quite enthusiastically about East Street in Horsham. This narrow road, in the centre of the town, was converted by our local councils into a ‘shared space’ environment over the summer of 2010.

It was an ideal target for such a conversion. The nature of the one-way systems in the town meant that the street itself did not have much motor traffic on it (drive down East Street, and you quickly end up right back where you started), and what vehicles there were on the street were heavily outnumbered by pedestrians. Despite the predominance of pedestrians, however, the street was unpleasant to walk on, with narrow pavements, and multiple parking bays.

To their credit, the council decided to do something about it, attempting to redesign the street in favour of pedestrians, and cyclists.

The result was a qualified success. This

is a genuine improvement on this –

However, my earlier, somewhat sunny, enthusiasm about East Street has been slightly tempered since the start of the year.

One of my main concerns is how a presumed ‘equality’ between road users actually pans out when you have motor vehicles rubbing up alongside pedestrians. This is something Cycle of Futility has written about recently, noting that

Here’s how ‘equality’ works on East Street – a video, showing the conditions on this street, at around lunchtime on a Friday.

By my estimates, pedestrians outnumber vehicles by around 30:1. Yet the two vehicles that drive down the street – albeit reasonably carefully and considerately – completely dominate the environment. There is, ostensibly, an equality between what I dislike calling ‘road users’ in this shared space, but unfortunately some road users are more equal than others. Can we honestly say that East Street is ‘shared’, when the minority mode of use hogs it?

The simple solution would be to ban vehicles, at the very least between 10am and 4pm. This was, in fact, the solution applied during a trial period in 2008-9 – deliveries were made outside of these hours, and the street was closed to traffic at peaking shopping hours. However it seems that just two shops are insistent upon having deliveries to their front door at all hours of the day – so ruining the street environment for all the pedestrians that use the street, and also for the vast majority of retailers that would like to see the street fully closed to traffic, for at least the majority of the shopping day. At the moment we have large HGVs driving down this ‘pedestrianized’ street, like this one, which was urgently delivering… paper napkins and cups. 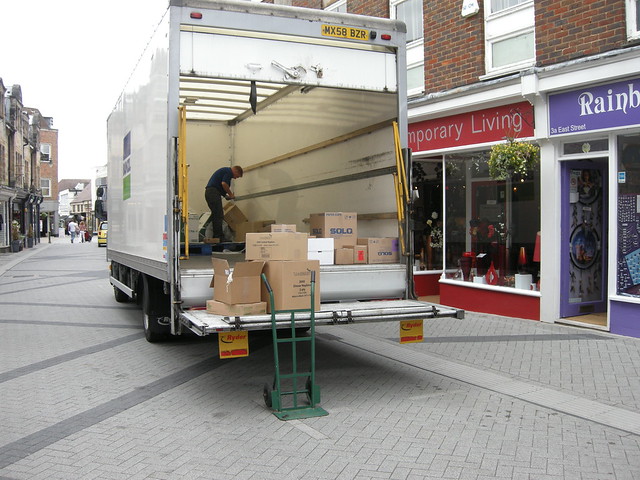 The East Street traders have themselves organized measures to make the street more pleasant for pedestrians, apparently because the council won’t act. They are attempting to ensure that their deliveries are arranged before 10am, and after 4pm, and are encouraging delivery drivers to park away from East Street, and walk their deliveries in. From the County Times of May 12th, 2011 –

Chris Holt, member of the East Street traders’ group and owner of La Source, said: “We scratched our heads and we said why don’t we come up with something voluntary – because no-one else can be forced to do this. The strong message we were having from our customers is that they were concerned about the amount of traffic on the street. We’re not just doing this for our own business, but for the safety of customers who should be able to enjoy the street. The only reason it’s been ongoing for so long is because it only takes one objection to stop the full pedestrianisation.”

It should also be pointed out that there are a large number of restaurants on the street who are, for obvious reasons, keen for the street itself to become an al fresco dining area. But sadly they are being thwarted, because the council appears uninterested in creating a fully pedestrianised street, even in the evening, when there is no need at all for deliveries.

Another problem is that the expensive street furniture – which was designed both to make the street more pleasant, and also to deliberately slow vehicles’ progress down the street – is being progressively destroyed. Of the three larger benches that were installed on the street, one was destroyed in November last year when a vehicle drove into it.

And last month, the exact same fate awaited another bench, when a motorist smashed into it – 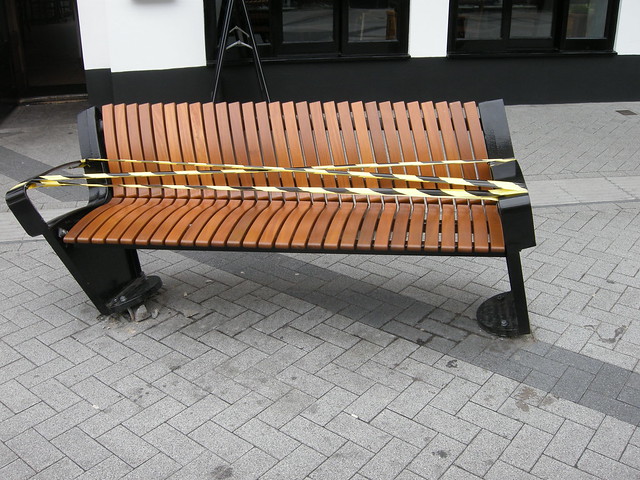 These benches are plainly expensive; they have been removed, and have not been replaced. And this is barely nine months after the new design was opened – at this rate, there will soon be no street furniture left. And as these obstacles disappear, so it becomes easier and more tempting to drive down this street, and park on it – even though, officially, the only people allowed to do so are those making deliveries, or ‘loading’ (and this includes ordinary members of the public, some of whom seem to be interpreting ‘loading’ in a most liberal way) and those with blue badges.

There is no need for anyone to drive down, or park on, this street. There are two large car parks barely yards away from it, and alternative routes into the town centre (alternative routes, I might add, that are explicitly designed for motor vehicles, and unpleasant for cyclists and pedestrians). There is a street at the end that can quite easily be used as a loading area.

And yet without restrictions, we see the results. Motor vehicles are taking over. They are systematically destroying the pedestrian-friendly furniture. They are increasingly clogging up the street, and making pedestrians more wary of having to deal with ‘traffic.’ This same ‘traffic’ is preventing restaurants from setting up tables and chairs on the street itself, despite the vast preponderance of people on foot on this street.

I don’t want to share this street with motor vehicles any more.

8 Responses to East Street, Horsham – A shared space that can’t be shared?