How to “tame the traffic” on a shared space street

In a post on shared space back in July, I noted how the high-minded concepts of these kinds of schemes are eroded by a failure to address the vexed issue of motor traffic flow. The streets can’t truly be ‘shared’ if motor vehicles come to dominate the road space.

Well, an unexpected solution has presented itself on East Street in Horsham. Simply park two cars side-by-side across the street, preventing any motor vehicles from travelling down it, but still helpfully allowing pedestrians and cyclists to pass through. 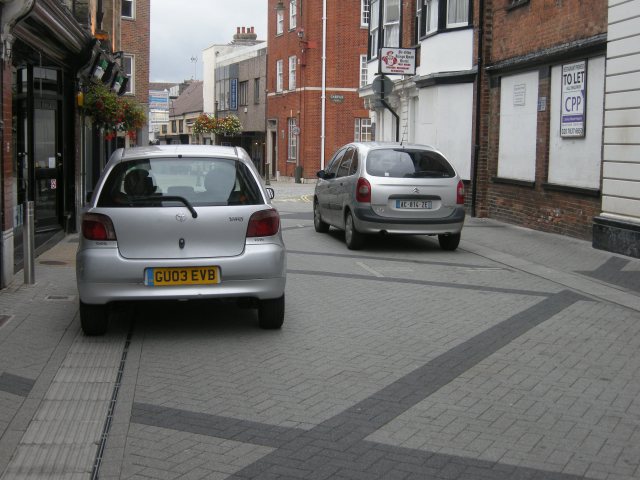 This is the kind of thing we like to see on this allegedly pedestrianized street.

Unfortunately, shortly after I took this picture, the blockage was ‘resolved’ by a motorist who simply honked his horn repeatedly and somewhat impotently until the owner of the car on the left emerged from the restaurant she had parked directly outside of.

Neither driver should have been on the street in the first place.

This entry was posted in Horsham, Shared Space, Town planning. Bookmark the permalink.