A tale of two bridges, and two cities

London is allegedly undergoing a cycling revolution – an apparent sea-change which has seen a proliferation of pointless paint across the capital, the emergence of a bike hire scheme, the occasional mass cycling event when roads are closed to traffic, and… that’s about it.

If you were in any doubt that this ‘revolution’ consists entirely of hype rather than substance, you only need to look at Transport for London’s plans for the remodelling of Blackfriars Bridge, where to the increasing fury of cyclists and pedestrians, they seem determined to force through a road layout straight out of the 1960s, which gives no thought or consideration to vulnerable road users, and appears to be focused around ‘smoothing traffic flow’ – in other words, pumping the maximum number of motor vehicles through the junction.

There are unpleasant bridges for cycling elsewhere in the world, of course. Here’s one of them – the Pont du Mont Blanc, in Geneva. 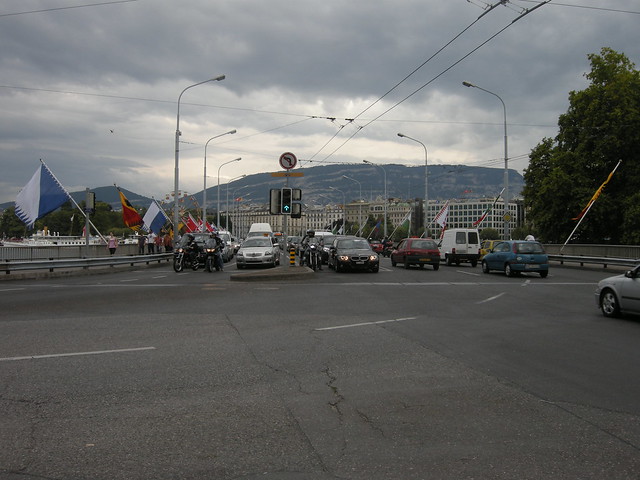 As you can see, it carries six lanes of motor traffic. This is unsurprising, given its location, because it lies at the western end of a very large lake. It’s the shortest route around Lake Geneva for a great deal of traffic that is heading south, or south-east, into France – or, conversely, traffic heading north into Switzerland and on into France and Germany. Coupled with all the motor traffic heading into and out of Geneva, this makes for a very busy bridge indeed.

This article, from the local Geneva press, notes that

you have to be suicidal to cycle on the Mont Blanc Bridge.

It certainly doesn’t seem very friendly. The lanes are not wide, and in the time I stood at the junction, I didn’t see any cyclists travelling across it on the road – although a number did use the pavement to the left.

To their credit, the Swiss are actually doing something about it. They are going to construct something like this –

A separate cycle track, built on to the side of the existing bridge. Apparently, according to the article, the tendering process for the design will open next year, so that construction can begin by 2014, to take advantage of potential allocated federal funding. There is even talk, in the meantime, of allocating space on the bridge itself for cyclists, as an interim solution.

What’s remarkable is that the conditions for cycling in this area of Geneva, as things stand, are not all that bad. Yes, the Mont Blanc bridge is unfriendly, but only a hundred metres or so to the west, you can cross the Rhone (which bisects Geneva, as it empties the lake) on the Pont des Bergues, which looks like this – 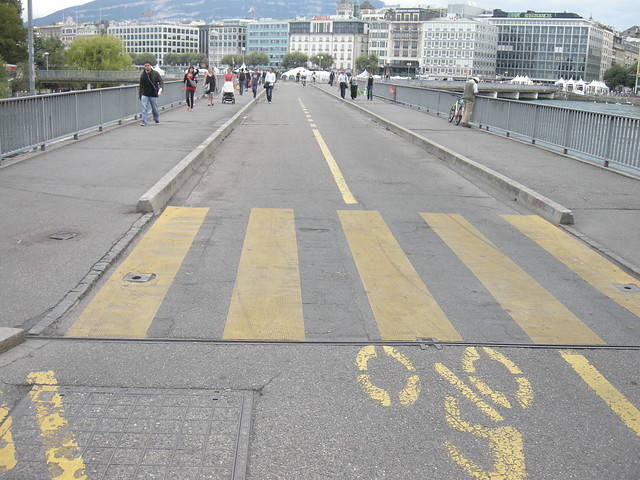 A bridge entirely for pedestrians and cyclists, with a wide track for cyclists in the middle. And further to the west, we have the Pont de la Machine – 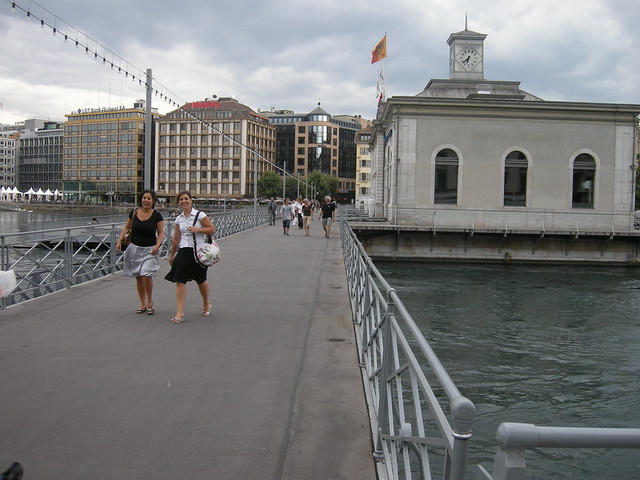 A bridge for pedestrians. I’m not sure whether you are allowed to cycle on this bridge, but it would not surprise me if you could.

So there are already two bridges in close proximity that are closed to motor vehicles, and are enjoyable to use on foot or by bike. Despite this, the Geneva municipal council, and the Swiss federation, are spending money to make the Mont Blanc bridge pleasant and subjectively safe to cycle across. You can see the location of these bridges on this map –

You don’t need me to tell you that the economy of Geneva has not ground to a halt, despite these bridges being closed to motor traffic (it’s doing rather well, thanks!) which puts into context the rather strange opinion of Andrew Boff about Blackfriars –

we’ve got to look at [motor – this is what Boff meant] traffic flow as well, because, you know, the reason we’re able to pay for things like the Blackfriars development and improvements is because we are in an extremely wealthy country, in the wealthiest part of that wealthy country, and the reason we’re wealthy is because of the economy, and if we start taking steps that damage the economy of London then we’re shooting ourselves in the foot. There will be no more future improvements if we make this place poorer as a result of decisions about traffic.’

Boff thinks impeding motor vehicles on the bridge will harm London’s economy. The example of Geneva, and other European cities,  suggests otherwise.

Interestingly, while I was in Geneva, I didn’t see any glossy posters exhorting people to embrace cycling. I didn’t read any talk of a ‘cycling revolution’. They just seem to be getting on with it – using infrastructure to create the conditions in which people will feel naturally inclined to use a bicycle.

And there were plenty of them about. 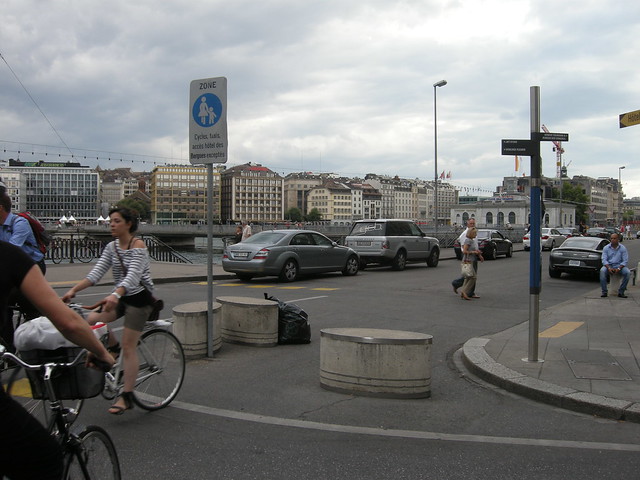 This is the Quai des Bergues, which runs alongside the Rhone between the Mont Blanc bridge and the Pont des Bergues. The sign tells you that this street is for pedestrians and cyclists only – there is an exception for taxis serving the hotels here.

Further along, the junction with the Pont des Bergues – 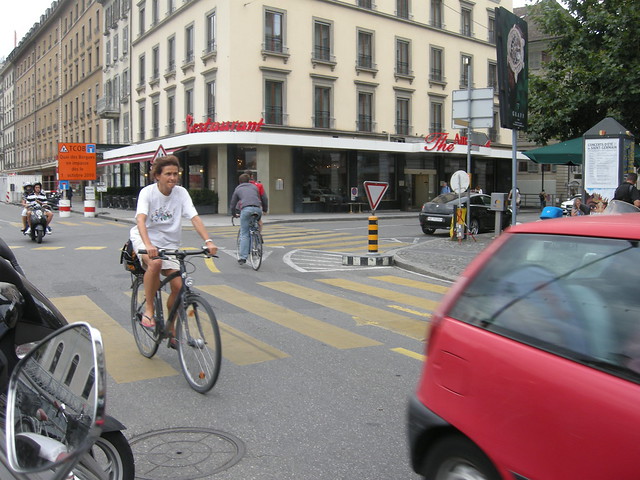 You can see that this is also a good environment for walking. There are pedestrian crossings that lie on ‘desire’ lines, at each of the corners of the roads. This is the general model for Geneva, and Switzerland as a whole. Below, we see three pedestrian crossings in close proximity along one street. If you step onto any of these, traffic has to give way to you. 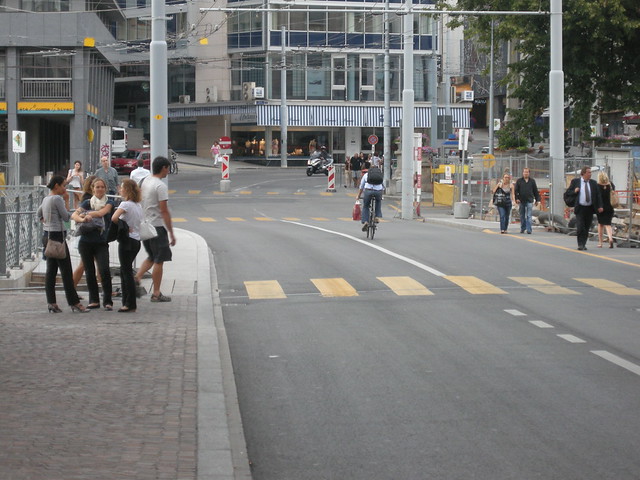 And again, here – pedestrian crossings where people want to cross – 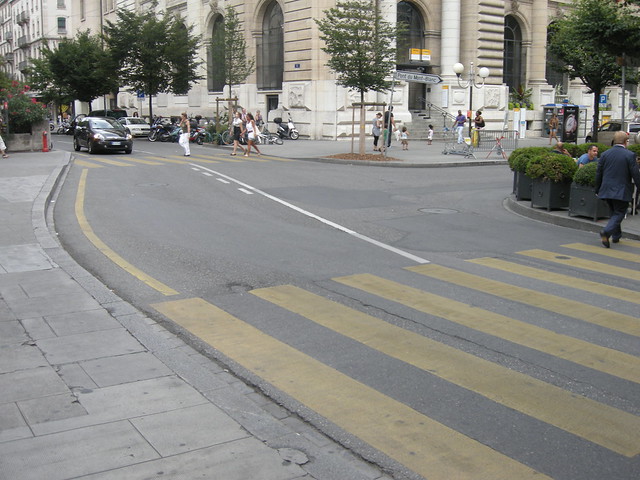 This kind of priority is unimaginable in London, where what few pedestrian crossings that do exist are being removed, and time is being insidiously taken away from pedestrians at those that remain thanks to ‘signal retimings‘ and pedestrian countdown. Motor traffic comes first.

I also noticed that, just like in many areas of Paris, there is a presumption that cyclists should be allowed to cycle up one-way streets. There are contraflows on pretty much every one-way street. 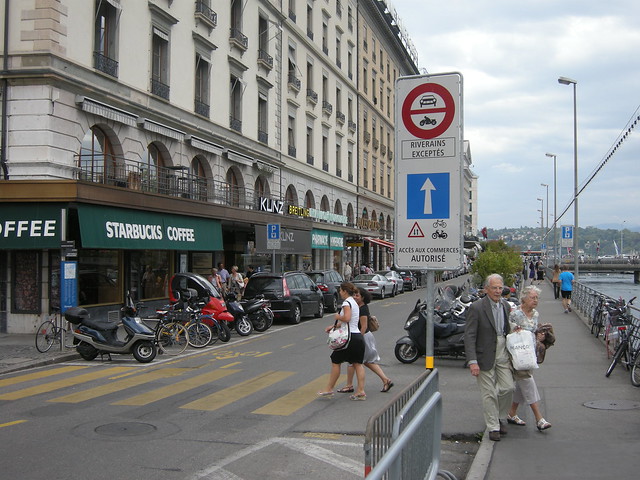 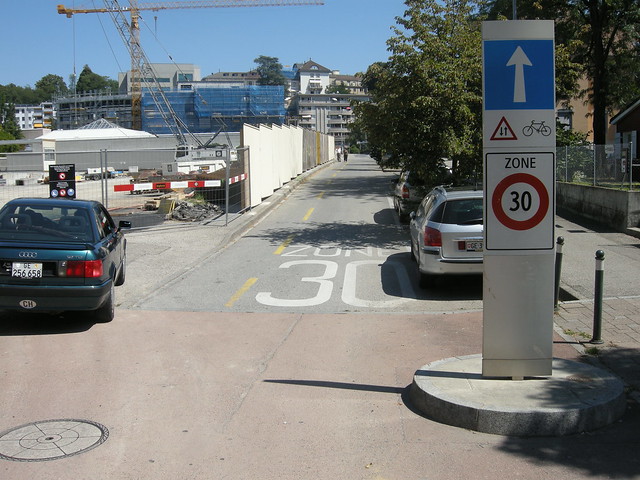 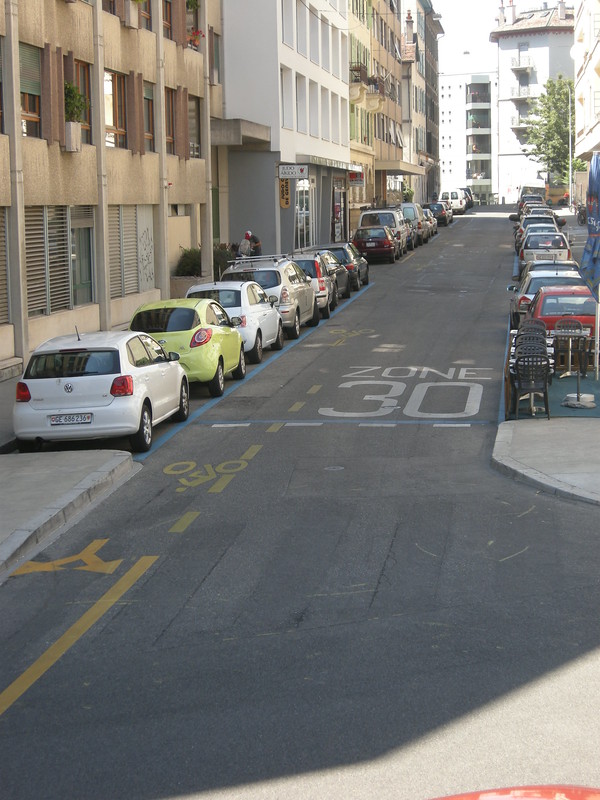 These photos also show many streets are 30 kph zones – around 18-19 mph. The Swiss, as I understand it, are quite keen on enforcement. (And in a post to come, I will show you some 20 kph zones in Swiss towns – only 12 mph).

Geneva is not even particularly brilliant for cycling – it’s nowhere near as good as Utrecht, for instance, which I visited recently. But what’s revealing is that it is streets ahead of London (which, remember, is undergoing a ‘cycling revolution’). There is no comparison between Geneva and London when it comes to the friendliness of cycling. I’m starting to see this – 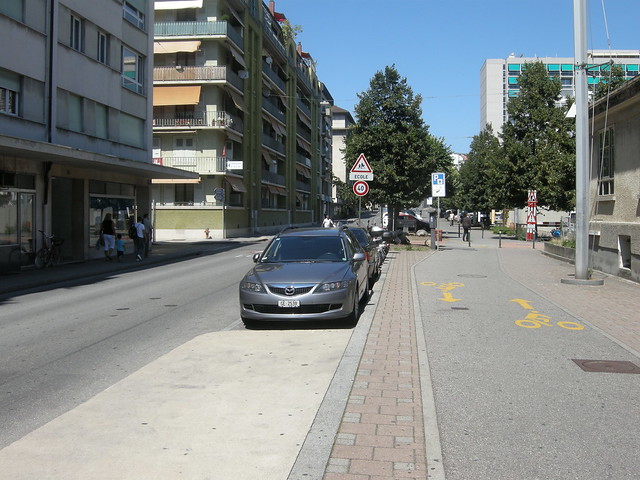 Well-built, separated cycle tracks. This one lies in the University Hospital district. 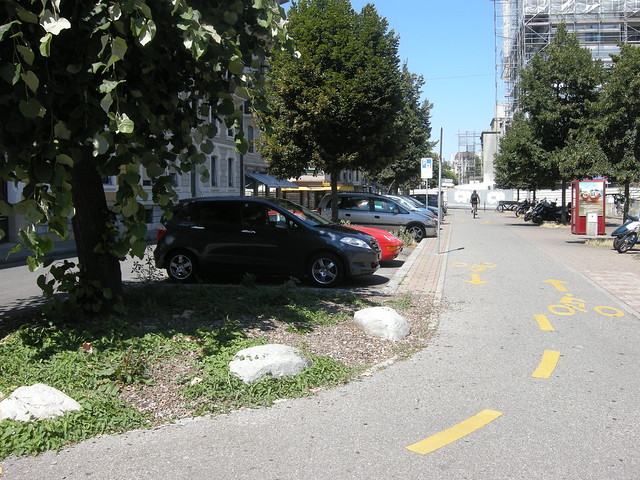 A quick perusal of Streetview shows other locations in Geneva where these kinds of paths have been constructed.

It seems to me that Geneva, like most other continental cities, has the right idea – it’s taking steps to encourage cycling and walking, by reallocating road space, and creating a subjectively safe environment. Meanwhile, in London, we are having a desperate battle to even get Transport for London to listen to concerns about Blackfriars, a bridge where cyclists are actually already the majority user at peak hours. Nothing is being done to actually encourage cycling in London, beyond glossy promotion. If Transport for London get their way, Blackfriars Bridge will be a horrible place to attempt to cycle and walk, which is desperately sad.

5 Responses to A tale of two bridges, and two cities