Brompton rim tape – does it have to be this bad?

Posted on September 4, 2011 by aseasyasriding

I picked up a Brompton on Thursday – an M3L. After whizzing around on it for a few miles on Friday, my initial verdict is that it is tremendous fun to ride, and the folding mechanism is a delight.

I had intended to ride it to the launch of the Cycling Embassy of Great Britain. However, I was woken in the middle of Friday night by a tremendous bang. Having established that someone wasn’t trying to break in, I quickly realized that the noise resulted from an exploded rear inner tube on the Brommie. Without any spare tubes, or the time to fix it, I had to switch to my Roadrat for the launch.

My initial assumption was that the problem was a pinch flat, perhaps caused by some injudicious pumping up at the bike shop. However, when I got home yesterday evening, I discovered the real cause – 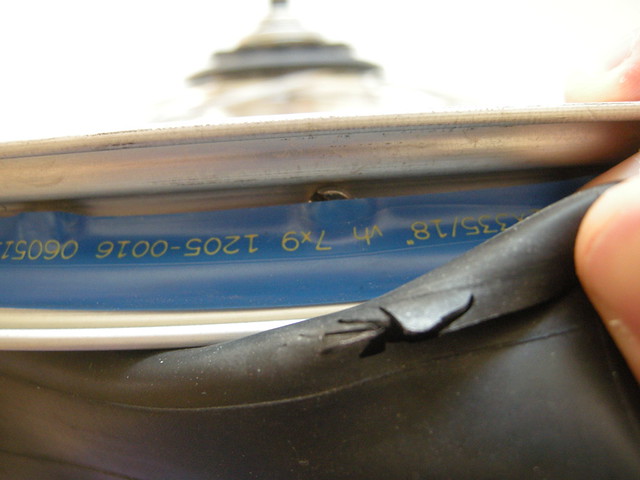 Some inadequate rim tape. It’s either too narrow to cover the spoke nipples, or it’s just been put in really badly. Or both. Either way, the metal of the nipple has been rubbing the inner tube, which wasn’t a problem while the bike wasn’t being ridden. As soon as I leapt on it, however, it has gashed it, resulting in the blow-out you can see in the picture.

This isn’t really good enough for what is quite a pricey bike. Suffice to say, I have had to buy a new inner tube, and replace the rim tape on both rims (I didn’t trust the front rim tape – it wasn’t as bad, but certainly far from perfect). Couldn’t Brompton spend a little more on some proper tape? It’s not the most ideal introduction to the Brompton experience.

3 Responses to Brompton rim tape – does it have to be this bad?