A small slice of the Netherlands, in Horsham

Posted on September 26, 2011 by aseasyasriding

One of the most pleasant streets to cycle on in Horsham is the Causeway.

It’s a chocolate-box perfect Sussex street, that – despite being very close to the centre of town – has little traffic on it. Why? Because it’s a dead-end (for motor vehicles and bicycles, anyway). The road terminates at St. Mary’s Church, which you can see in the distance, leaving only a footpath which allows you access to Normandy, and the cricket field area of Horsham.

The only people driving on this street, therefore, are the people who are fortunate enough to live on it, or the few vans making deliveries down here. (Or the people who have got confused by their sat navs). So despite there being no separation from motor traffic, it feels very pleasant – and subjectively safe – to cycle here. No-one will be driving down here in a hurry. There are even speed humps to ensure they don’t.

This road layout has been arrived at by historical accident – a 13th century church in a historial area is something of an obstacle to anyone who might, in the past, have wanted to turn the Causeway into a through-route. Although I note that Horsham has been quite happy, in the recent past, to demolish a church to build an urban dual carriageway –

But, returning to the subject in hand, there are roads in Horsham that are nearly as pleasant to cycle on as the Causeway because, like the Causeway, they are not through-routes.

One of these roads is Comptons Lane, in east Horsham, marked on the map below.

The reason is simple. Below the roundabout, it is a through route. However, north of the roundabout, the road has, instead, been closed to through traffic. This means that I was able to stand, quite comfortably, in the centre of the road as it exits from the enormous Harwood Road roundabout, to take this picture.

Dead-end. Note – incidentally – the utterly superficial bicycle ‘infrastructure’ painted on the pavement to the left, that disgorges you back onto the road right by parked vehicles. As it happens, the poor design does not particularly matter in this case, because as the sign tells you, this is a dead-end, and, like the Causeway, the only people driving onto this street will be those seeking to gain access to the few dwellings along it. It’s fine for anyone to cycle along this section of Comptons Lane, without any particular worries about traffic – it’s a lovely, quiet street. It could perhaps benefit from speed humps, or a rougher surface, but it’s perfectly adequate as it is.

And it’s rather better than that for people travelling by bicycle, because – in a remarkably enlightened move for Horsham – the road is permeable for cycling at the northern end. 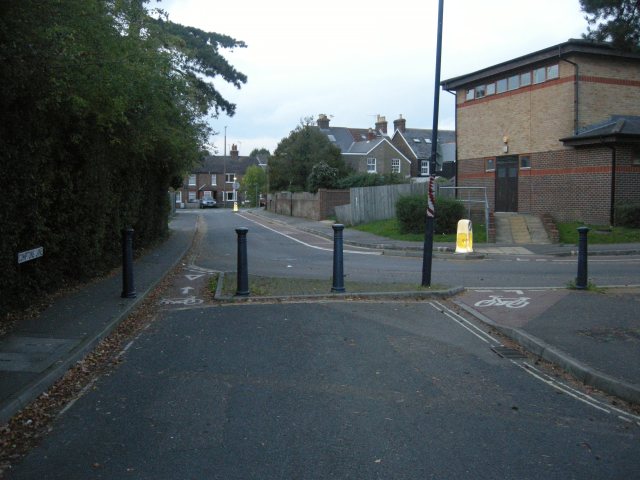 Not exactly done to Dutch standards, but fine enough. You can cycle through here to the shops that line Crawley Road (the new-ish building opposite is a Co-op supermarket), while motor vehicles cannot pass. Indeed, if you wish to drive to Co-op from the south, the closure of Comptons Lane means you are sent on a small diversion –

By bicycle or by foot, of course, you can go directly.

This kind of thing, as we discovered on our Cycling Embassy field trip last week, is standard practice in the Netherlands. Residential roads are generally impermeable to motor vehicles, while passable to cyclists and pedestrians. The road network is limited in such a way that, just as on this short stretch of Comptons Lane in Horsham, the only people driving on residential roads are those seeking to gain access to houses along them. It is virtually impossible to rat run in the Netherlands, through a combination of direct road closures, or through complex one-way systems (from which bicycles are, of course, exempt). That means that residential roads have low volumes of motor traffic on them, a precondition for pleasant cycling conditions on streets where you are not separated from motor traffic. 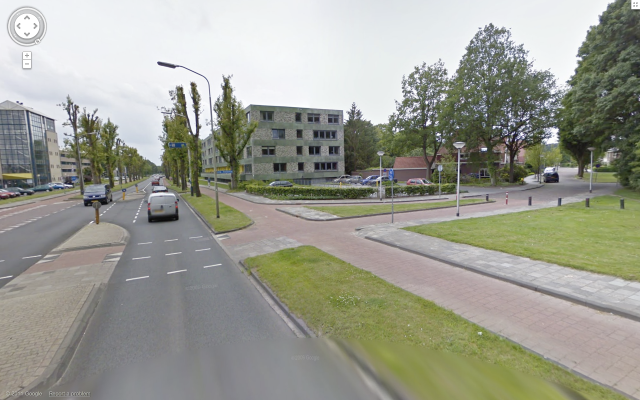 In this view of Assen, we see the busy main road running past the railway station. It is impossible, however, to access the residential area to the right by motor vehicle here (but, as you can see, very easy to do so on foot or by bicycle).

If you do have to drive inside this residential area, you are confronted by a network of one-way streets – 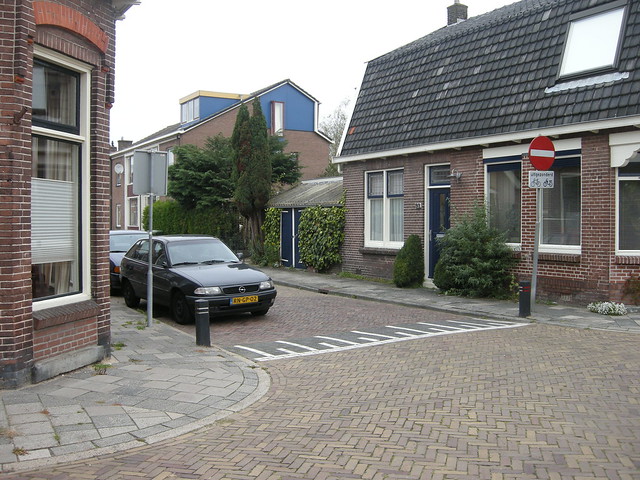 with tight radius corners, speed humps, a bumpy brick surface – all designed to ensure calm driving. Notice the one-way exception for cyclists. All the streets in this neighbourhood look like this. It felt entirely safe to cycle around it. (Once you are on a main through-route, however, you will be separated from traffic, as in the picture above.)

Unfortunately, back in Horsham, this section of Comptons Lane is the only part of town I can think of where this kind of impermeability has been applied. Everywhere else, it is simple and convenient to take the most direct route by car, whichever road that means you end up driving down. There is no competitive advantage for bicycle or foot, and furthermore, even on supposedly ‘quiet’ streets, you will find yourself being intimidated by drivers racing from A to B, because there are no restrictions on what roads they can drive down.

An appalling example of this is Harwood Road itself, and the knock-on effects on the parallel routes of King’s Road and Crawley Road. Harwood Road was built as a ‘relief road’ in the early 1960s, designed to take traffic away from these two predominantly residental roads, and speed it from the town centre to the ring road. You can see this layout in the map below.

Harwood Road (marked) forms, as you can see, a bypass around the direct route that runs along King’s Road and Crawley Road. It looks something like this –

A wide, fast road, with a 40 mph limit. Designed for getting cars away from the town centre quickly.

This is fine. The Dutch have roads like these. There would, of course, be proper cycle paths alongside them, something like Hoofdlaan in Assen – 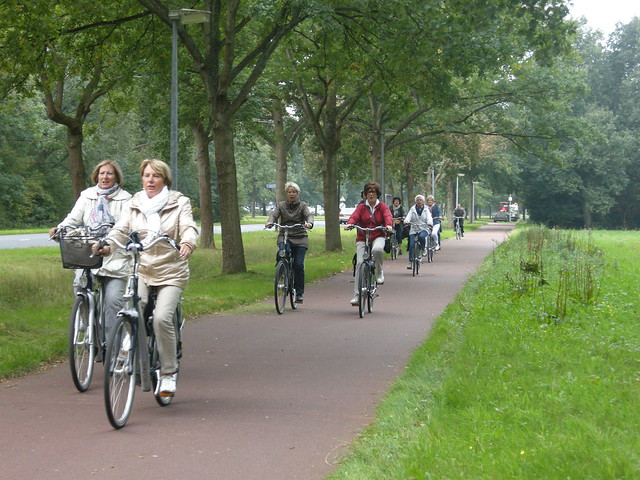 This road (in the backgroound) is largely identical to Harwood Road in Horsham, given that it connects the ring road in Assen to the city centre road. It also has a higher speed limit. The difference, of course, is that there is a rather pleasant cycle path alongside Hoofdlaan, which allows these ladies to cycle into town without worrying about having to take the lane at pinch points. Or worry about anything at all, in fact.

They are not. (I have explained why King’s Road is hellish for cycling here).

No measures have been taken to restrict traffic on either of these two roads, beyond some superficial added pinch points on Crawley Road, which are, in my experience, lethal to cycle through, because drivers either fail to yield to you, or attempt to overtake through them. A large proportion of my ‘incidents’ in Horsham occur along this road, despite my limited use of it. Indeed, note this petition –

We, the undersigned, call on West Sussex County Council and Sussex Police to take urgent action to reduce the speed of drivers on Crawley Road, Horsham. Noting that there have been two serious accidents on the road in the last 9 months due to speeding drivers, that cars still regularly exceed 50mph in a 30mph zone, that the existing traffic calming scheme is totally ineffective, and that police speed checks are rarely, if ever seen. We are concerned that pedestrians or drivers on the road will be seriously injured or killed unless more steps are taken to reduce the speed of drivers and urge WSCC and the police to act now.

There are no measures at all on King’s Road.

You would have thought that the construction of an enormous inner ‘relief’ road would have led to measures to prevent vehicles from using the roads that were meant to be relieved. But in the absence of those measures, you find that most people continue to drive along King’s Road, and Crawley Road – because, looking at their sat navs, it is a  direct straight line route, with no restrictions. The only difference is that the speed limit is 30 mph, instead of 40 mph, but in practice that makes little difference. Meanwhile, Harwood Road – which is largely empty in comparison – encourages speeding driving.

Why not close King’s Road to traffic, by means of a barrier halfway along it? The residents would most likely welcome it – their road is currently a hellish race track. Slightly longer journeys around the diversion of the Harwood Road would be a small price to pay for a vast improvement in their quality of life. The only small difficulty I can see is that buses currently run along this road – but as the bus stops are at either end of King’s Road, they would only need to be moved a matter of  tens of yards onto the new arterial route. Harwood Road would become what it was built for – a busy arterial road. And there is plenty of space there for cycle tracks to be built alongside it. Meanwhile, King’s Road (and to a lesser extent, Crawley Road) would become quiet, pleasant streets.

Why don’t we start going Dutch?

This entry was posted in Cycling Embassy Of Great Britain, Horsham, The Netherlands, Town planning, Uncategorized. Bookmark the permalink.

4 Responses to A small slice of the Netherlands, in Horsham