The subtle enslavement of parents

Posted on October 4, 2011 by aseasyasriding

Idly thumbing through a local freesheet while on my coffee break this morning, I encountered a news article entitled ‘Dads Sentenced to a Year Behind The Wheel.’ It turned out to refer not to a curious punishment meted out by a whimsical magistrate, but to the fact that fathers apparently spend one whole year of their lives ferrying their children around, until they reach the age of 18 (when presumably they are using cars of their own).

This wasn’t, of course, a genuine news story, but a Halfords press release from some months back, that has only just filtered through to the Horsham Advertiser – the company in question conducts some research, and then presents it as a piece of news that local newspapers can swallow up, using as content to fill their pages, in exchange for a plug for the company that commissioned the research. Everybody wins. (This is similar to the method that results in spurious mathematical equations constantly appearing in the media as ‘news’ – a transparent attempt to get a company free publicity in exchange for paying a scientist to prostitute themselves).

The facts and figures contained within such an article should therefore, of course, by treated with some caution, but with that caveat, this research is rather revealing.

By the time his children are 18, the average Dad has spent the equivalent of a whole working year Taxi-ing his children around. In fact modern Dads spend more time ferrying kids than almost anything else they do – apart from work and sleep. That’s more time than they spend in the garden, on DIY and even in the pub. Dads clock up an average 25 miles a week on 2.33 journeys, taking their youngsters to school, sports and social events – or 2hrs 16mins driving. A fith (20%) of dads, however, admitted to undertaking a journey of over 100 miles and 7% over 200 miles… A dedicated one in eight (17%) of fathers do more than five trips a week. Over four in five (81%) give lifts to the children of friends and neighbours.

There then comes the inevitable, crowbarred-in soundbite from someone at Halfords –

Rory Carlin, Halfords Autocentres Marketing Director said: “We spend a lot of our time caring for family cars to help customers live their lives on the move.We can’t do anything about our kids’ increasingly hectic social lives or the rising cost of fuel, but we can help by making routine servicing, maintenance and tyres affordable and accessible. We’re working hard to bring down the cost of motoring because we understand that dedication comes at a cost, both in terms of the fuel used and wear and tear on the car itself.”

Fair enough. Probably a good idea to look after your car, if you’re spending that much time driving your children about.

But Rory Carlin misdiagnoses the problem. Fathers are not driving their children around because of their ‘increasingly hectic social lives.’ At a guess, I would suspect that children are making fewer trips to visit their friends than half-a-century ago – they’re probably spending a bit more time at home, contacting them via the interweb.

The problem is rather that when they come to make trips to visit friends, or to school, they are no longer making those trips by themselves. Parents either don’t trust their children to make journeys on foot or bike by themselves, or the children don’t want to. This is why fathers are – apparently – spending more time driving their children around than any other activity, except work and sleep.

Dutch fathers presumably have it a little easier; the average age at which Dutch children start cycling to school by themselves is eight (as David Arditti notes, this is a source of concern to the Dutch authorities – because it is considered too old). In Assen, 100% (to the best approximation) of children cycle to school. And it’s not just the school run that parents are spared from. Visiting friends in town; sleepovers; going to the park; playing football; these are all things that children can do by themselves. Dutch cities and towns are designed to allow children to make their own way about, in a subjectively safe environment. David Hembrow assured us, on our Embassy Field Trip, that children using bikes with stabilisers can, and do, cycle into the centre of Assen city, with their parents (although they often can’t cycle back – it is some distance for young children).

Go to the Netherlands, and you will see incredibly young children cycling around. 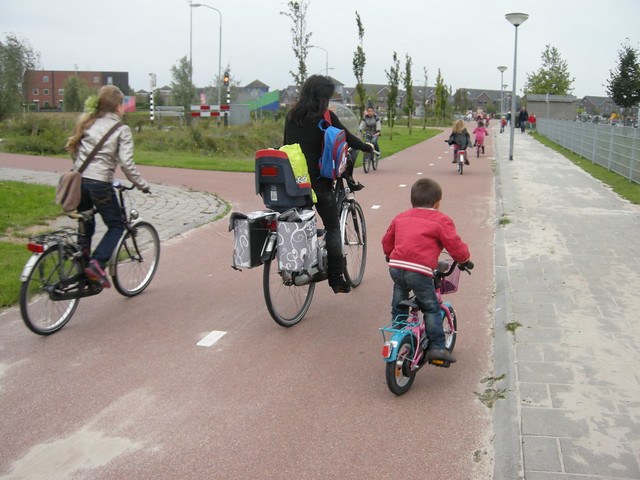 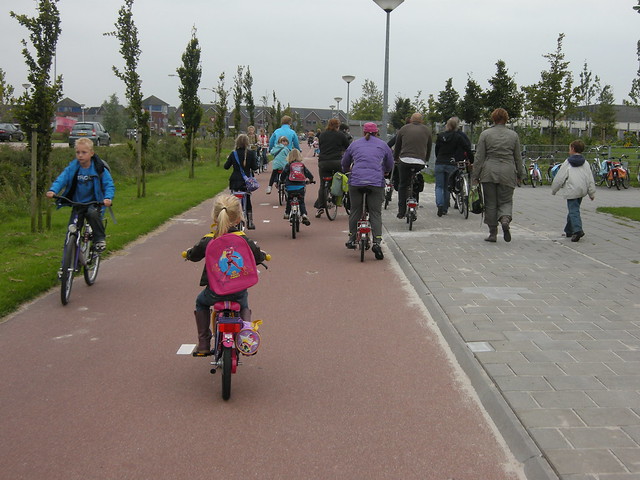 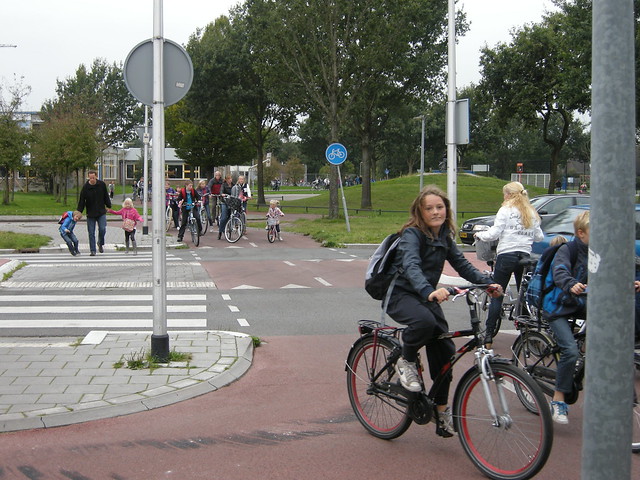 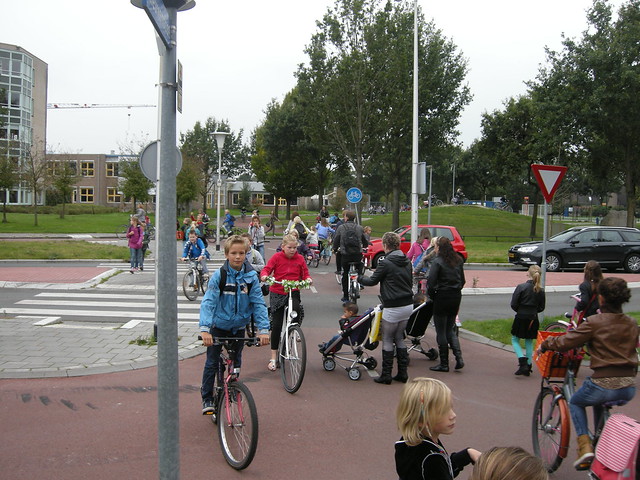 These are children cycling home from two different primary schools, for lunch with their parents. They can do this because it’s easy.

Parents can also go shopping with their children, by bike – they don’t need to worry about packing them into cars (which was a serious concern voiced in the Understanding Walking and Cycling report) – 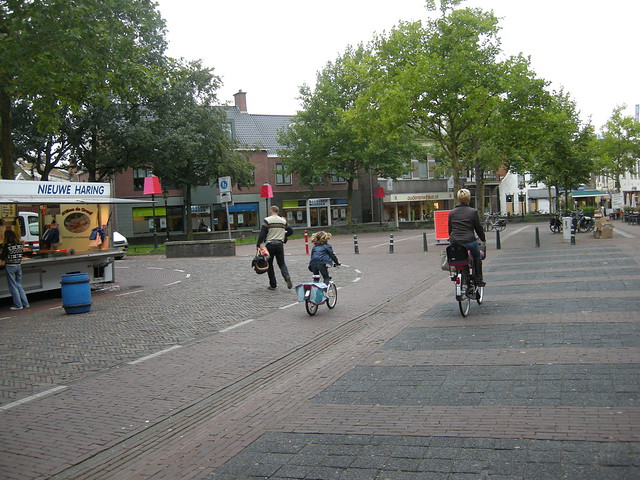 Teenage girls don’t need a lift into town to go shopping either – they can hop on a bike, and go with their friends (the gentleman is not their father – he’s just someone they’re about to overtake) – 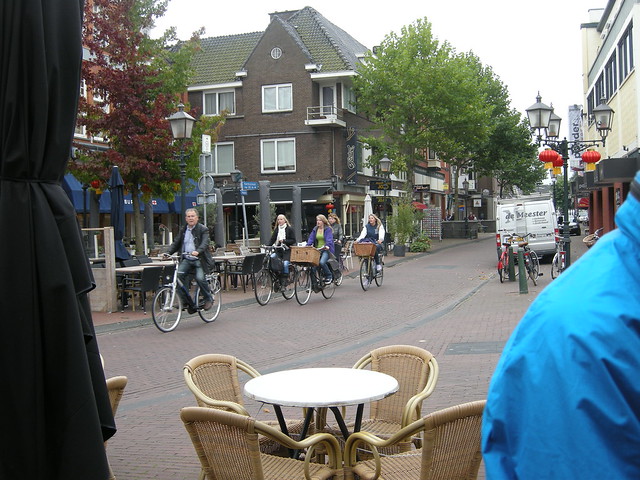 The amount of time this independence must save their parents – both in leisure and work hours – is surely stupendous. We should be screaming this from the rooftops. Not only can our children be far more independent – which is good for their own well-being (as well as, tangentially, their health), but their parents no longer have to spend a vast proportion of their own time acting as a glorified taxi service. That means they have more time to relax, and also to be productive. There is a huge economic argument here. Parents can be working, instead of spending hours driving their children around (not to mention the savings that would result from the easing of the congestion caused by needless car journeys).

This isn’t some fantasy – the Netherlands is a country only just across the North Sea, one of nearest neighbours. Yet, for whatever reason, these kinds of solutions to our mobility problems are completely off the radar. I am firmly convinced that the great majority of this country’s citizens would leap at the idea of their children being able to go to school by themselves, or being able to visit their friends, by themselves; they just don’t know how it could be possible.

It’s up to us to show them how. And the Dutch tourist board.

This entry was posted in Car dependence, Cycling policy, The media, The Netherlands, Uncategorized. Bookmark the permalink.

24 Responses to The subtle enslavement of parents