Cycling to the station

Posted on October 19, 2011 by aseasyasriding

Yesterday afternoon I caught a train to Brighton from Three Bridges station, in Crawley. On the platform, I was one of three people with a Brompton. Each and every one of us had, presumably, arrived at the station by bike. And that probably meant negotiating Haslett Avenue to get here. Below.

This is the road I cycled on, from Crawley town centre; it is three lanes wide for quite some distance. At this point Three Bridges station is hoving into view – you can just see a train on the bridge, above the yellow HGV. As the station requires a right turn, this leaves a cyclist with something of a dilemma about which lane to take here. The left lane would be the meek option, and you would be storing up trouble, requiring you to shunt yourself across three lanes of traffic in a short space of time and distance. The right lane would be the most ‘advanced’ option, but requires pace and stamina to keep up with traffic in the ‘fast lane’. The middle lane, perhaps the most sensible, but unnverving, with traffic passing you on both sides. That was my chosen option.

Taking this middle lane leaves you, beyond the junction in the first picture, in the left hand lane shown above. Three Bridges station is the brick building on the right. I have to get into lane 3 (the right-hand filter lane) at the lights ahead, which is no easy task, with motor vehicles racing towards the M23, barely a mile away. There is no other way of getting to the station, short of cycling on the pavement.

I made it! I’m still alive.

Despite these appalling conditions, people are still cycling here – as shown by the numbers of Bromptons at mid-afternoon. But they are being forgotten about in the way our streets are laid out. I don’t really appreciate having to negotiate my way across two or even three lanes of fast traffic simply to to make a right turn into a station – it’s not pleasant, and for anyone who doesn’t cycle regularly, I am sure it would be seen as extremely hazardous.

It’s not much better on foot, as you can see from this satellite image.

The station is marked at the bottom of the picture. If you live to the north of this road, Haslett Avenue, your only way to cross from the station is to walk to the railway bridge at the extreme right of this image, cross there to the centre island, cross again to another central island, and then finally make yet another crossing to the north side of the street. You will have to wait for motor vehicles at each and every stage. Note, by way of contrast, that if you are exiting the station in a motor vehicle, and you wish to turn right, you have your own dedicated single-phase traffic light, that will take you across the road in one go.

Just to discourage any ‘walking’ nonsense, the rest of the central reservation has been fenced off to stop you crossing anywhere else, even at the junction 50 yards to the west with Hazelwick Avenue, shown below. Extraordinarily, there is no north-south crossing for pedestrians here.

The forlorn-looking lady standing on the island in this streetview image is not on a pedestrian crossing; she has simply skirted the barriers and is attempting to cross the six lanes of this road in stages. To repeat, this is by a railway station.

Cycling to the station in Horsham is less hazardous, but equally inconvenient.

The approach to the station from the town centre, along North Street. The building in the distance, on the right, is the station itself. There is a cycle lane painted on North Street (it is of reasonable width for the UK, but totally substandard by any Dutch measure, certainly for a road of this traffic volume, where you would be segregated from motor vehicles). Naturally enough, as soon as any conflict with motor vehicles arises, rather than design a proper solution that might allow you to cycle to the front of the station, the ‘provision’ simply evaporates, and you are forced onto the pavement.

Where the cycle path ‘ends’ for good. From here you have to dismount, wait for the signalled crossing, and walk the hundred yards to the station entrance. This is so time-consuming that I continue to the busy roundabout in front of the station, and use that to gain access.

Several million pounds are currently being spent on a redevelopment of the station forecourt and entrance area. Are things being improved for cycling?

You will see, to the left of North Street, that the pisspoor ‘cycle route’ is being kept precisely in current form, except with the addition of a brand new blue ‘END OF ROUTE’ sign. Brilliant. The simplest way to access the station by bicycle will continue to be by looping around the roundabout. The new pedestrian area (marked in brick on the drawing) is fenced off from the roundabout, so presumably I will have to continue across the pedestrian crossing into the motor vehicle set-down area, before walking back.

Several complaints were made in the consultation (pdf) about the total lack of cycle routes to the station. The response?

These form part of the cycling strategy for Horsham

i.e., proper cycle routes to the station are not part of our remit, and will be covered by the ‘cycling strategy for Horsham.’

Sounds fantastic. Except there is no cycling strategy for Horsham. There are no proposals to do anything, anywhere, in the district, in West Sussex County Council’s latest Transport Plan for 2011-26. All we get is this mealy-mouthed paragraph –

Working with the local community and interest groups to identify priorities and encourage sustainable travel by improving the cycle and pedestrian network. This may include: new or improved cycle and pedestrian routes; signing; changes to speed limits; cycle parking; repairing and maintaining surfaces.

And so there are no improvements to the station for cycling, and there won’t be for the next fifteen years, unless our governments and councils have some kind of epiphany. The important question is, why was a proper cycle route to Horsham station not considered to be part of the actual improvement works to the station in the first place? The report by the Direction of Operations for the improvement works (the pdf above) notes that

The objectives of the forecourt scheme are to establish an improved interchange at Horsham station that will facilitate modal exchange between rail and cycle, bus, taxi and car.

But nothing has been done to ‘improve the interchange’ for cycling, beyond some extra cycle stands. A grotesque missed opportunity.

If I lived in Assen in the Netherlands, and I wished to cycle to the station, not only could I do so in safety and with ease, I would also find a subway cycle path that allowed me to cycle directly onto the station platform – 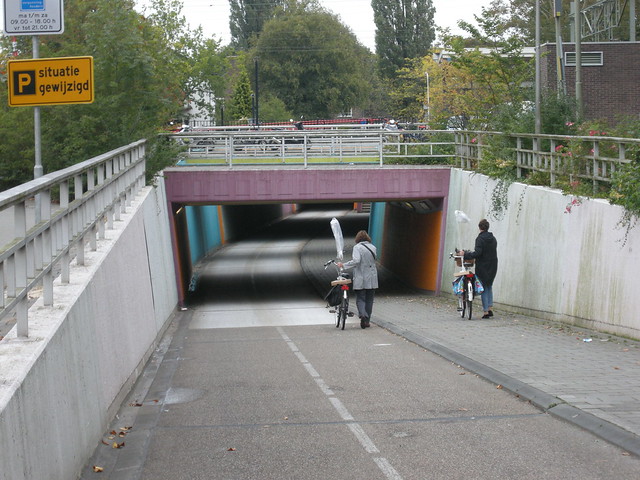 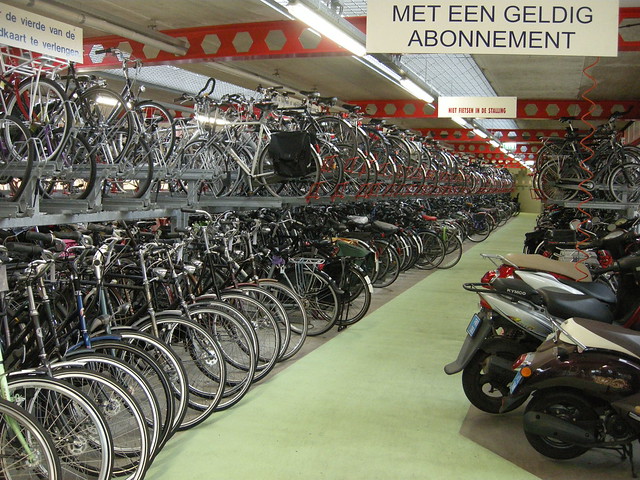 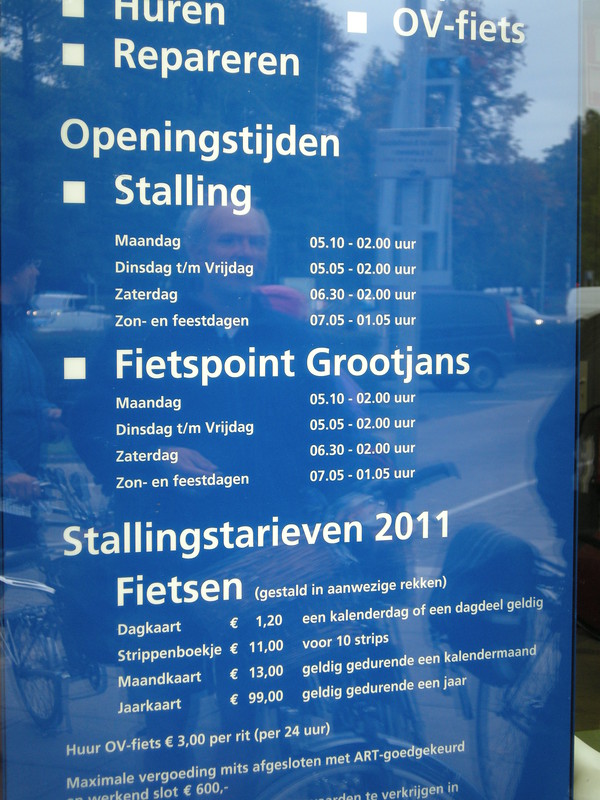 Naturally there is also plenty of outdoor parking – 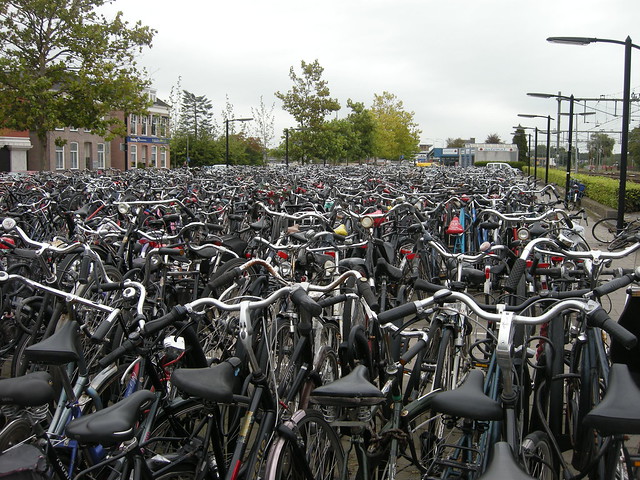 Or, if I lived in the larger city of Groningen, I would have a dedicated bicycle bridge to carry me across to the station – 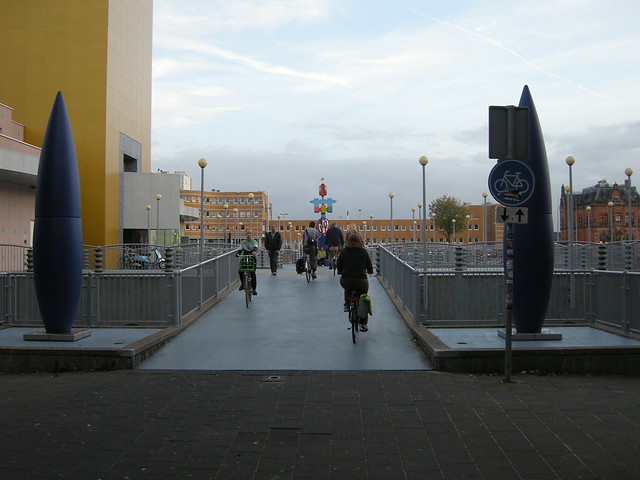 Dedicated traffic lights, with an indicator, telling me how long I have to wait until I can cycle across (not long) – 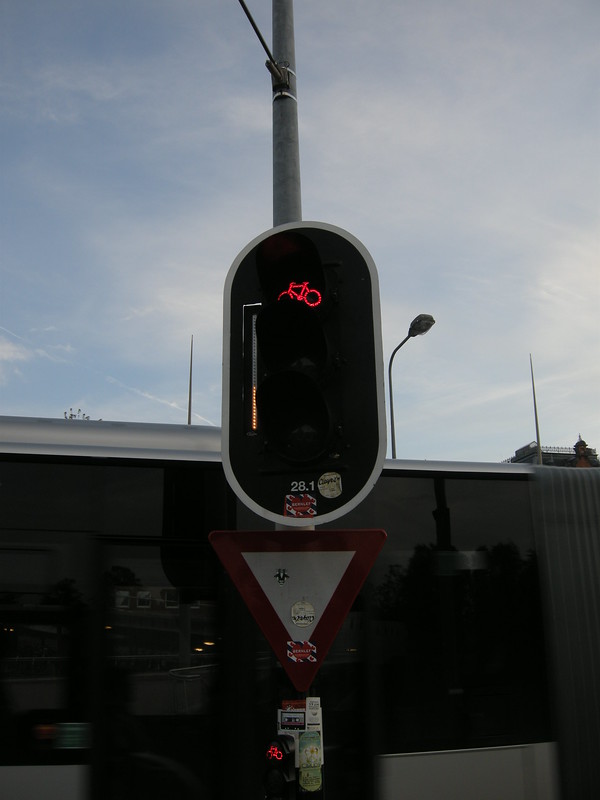 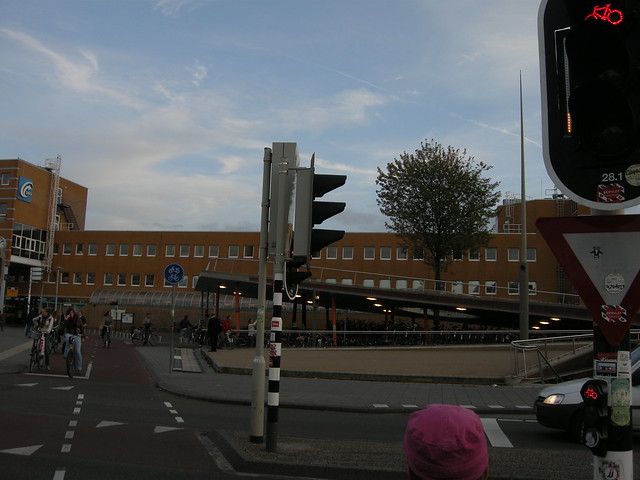 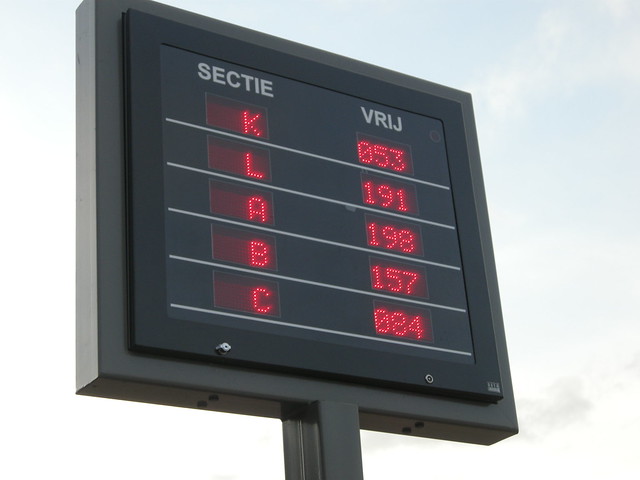 And lots of cycle parking – 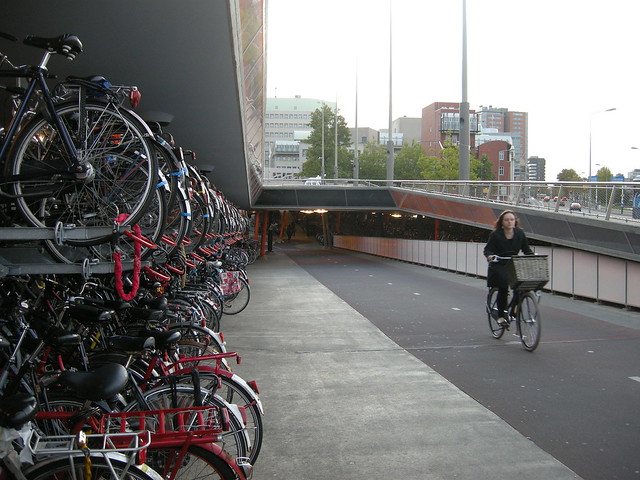 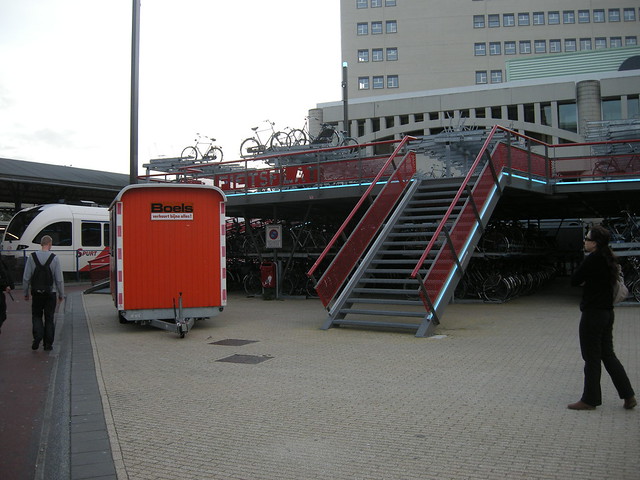 With more, direct, bicycle-specific routes to and from the station – 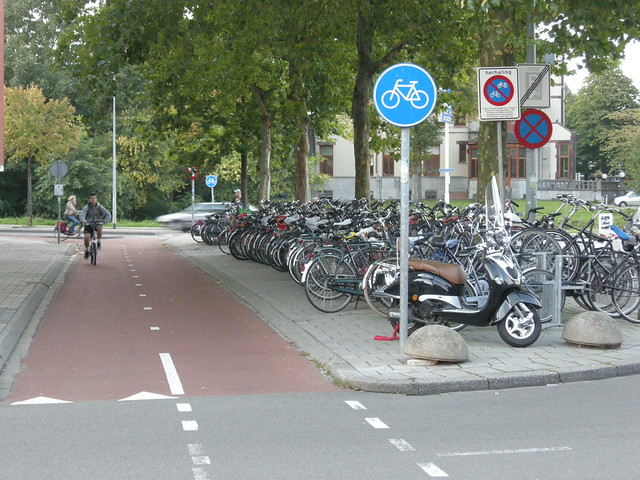 In short, cycling to the station in a Dutch town or city feels safe, easy and convenient. Interactions with motor traffic are minimal or non-existent. The routes take you directly to the station entrance, or even onto the platform. Meanwhile, in the UK, it feels exceptionally dangerous, unpleasant and inconvenient. I have to cycle on fast roads that are three lanes wide, and take the outer third lane, to enter Three Bridges station. I have to fiddle around on tiny little paths that evaporate just when they are needed in Horsham, and therefore walk, or risk cycling all the way around a busy roundabout.

And nothing is being done to change it.

12 Responses to Cycling to the station