The death of Brian Dorling

Posted on October 29, 2011 by aseasyasriding

On the morning of Monday 24th October, during the rush hour, a cyclist was killed by an HGV on the north side of the Bow roundabout. From the photograph on the London Cycling Campaign website here, the cyclist was hit at or about the traffic lights on the roundabout, at the end of the sliproad. At this spot here, in other words – 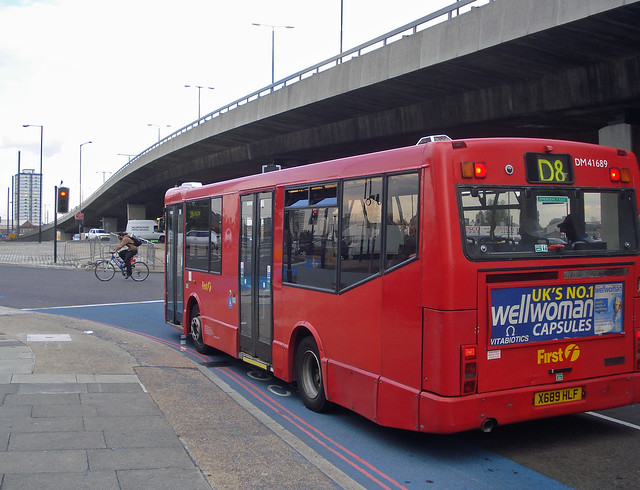 A ‘cycle lane’ described, in early September, as ‘appallingly dangerous’ by Diamond Geezer, who also provides the photograph.

On the 5th August, the BBC also visited this site to make a film, pointing out that the ‘Cycle Superhighway’ ends on the roundabout. They were told by local cycling campaigner Arnold Ridout that this was a ‘very dangerous spot’.

The Telegraph writer Jacquelin Magnay also wrote about the danger posed by this roundabout for cyclists, on September 5th.

I took the CS2 route from Aldgate, which took me fairly direct down Whitechapel High Street, Whitechapel Road, Mile End Road and Bow Road. It is dotted with traffic lights, I lost count after a while, but the widened lanes and clear directions made the route appear straightforward and feel relatively safe.

That is until I came to the Bow Road interchange. There is a large flyover above the Blackwall tunnel. Do I go over the flyover where the cars zoom past at accelerated speeds, or negotiate the traffic lights at the bottom of the hill? I took the safer, longer option but bizarrely the bike lane simply vanished. Visitors might be excused to think they took the wrong turn. Where to from here?

It now transpires that the killed cyclist, Brian Dorling (who was taking the same route as Ms Magnay), was a senior cost consultant for the Olympic site, and was presumably on his way to work there.

Appallingly, he was using the route to the Olympics recommended by Leon Daniels, Managing Director of Surface Transport at Transport for London, who wrote, back in August

One of my correspondents stated recently that there is no provision for cyclists at the Olympic Games. This is not true! Here is the real situaion!

Before going on to detail the eastbound route –

Heading north-east along Cycle Super Highway 2 up to the Bow roundabout. Dismounting here and using the access ramp onto the floating towpath in the north-west corner of the roundabout heading back under the flyover/roundabout using the new floating towpath.  Heading south on the Lea Navigation towpath to the road bridge into Three Mills.  Following the same route as outlined above to reach the cycle parking on the southern spectator transport mall.

The floating towpath is actually on the opposite side of the roundabout, which has to be crossed, either on foot, or by bicycle. You can see this arrangement in the official London 2012 ‘Getting to the Games’ map, of which the relevant detail is shown below –

Bow roundabout lies in the centre of this section of the map, at the intersection of the A11 and the Northern Approach. The green dashed line shows the ‘cycling route’ recommended by Mr Daniels, which involves crossing the roundabout and then using the new floating towpath to head south east (paradoxically, away from the Olympic site, but I would expect nothing more from a London cycle route).

Perhaps Mr Dorling could have dismounted on the west side of Bow roundabout and crossed on foot, but that would hardly have improved his safety because there are no pedestrian crossings at the roundabout, and according to Boris Johnson, there won’t be any time soon –

TfL has spent substantial effort looking at options for pedestrians crossings in this location and modelling various possible solutions. TfL have been unable so far to find an immediate solution for providing controlled at-grade pedestrian crossings at Bow Roundabout that does not push the junction over capacity and introduce significant delays to traffic. The feasibility of providing pedestrian crossings at the roundabout will continue to be investigated for the future. In the shorter term, TfL is providing on-highway facilities for cyclists at the roundabout, as part of Barclays Cycle Superhighway Route 2, and proposing to improve the urban realm in partnership with LB Tower Hamlets.

This makes my blood boil.

Last night the LCC published an open letter to Boris Johnson from a family friend of Brian Dorling. It is worth reading in full, but I quote the most pertinent passage here –

It seems frankly appalling that cyclists are actively encouraged to follow a corporate-sponsored cycle route that leaves them at a junction already and widely known as an accident waiting to happen. There is a ghastly irony that while London is promoting cycle access to the Olympic Park, Brian – himself a keen amateur sportsman – should die cycling on his way to work as a surveyor on this very project.

‘Ghastly’ just about covers it.

This entry was posted in Boris Johnson, Infrastructure, London, Transport for London. Bookmark the permalink.

3 Responses to The death of Brian Dorling