Kulveer Ranger on BBC Radio London, and how safety is not a priority for the Mayor

Posted on November 14, 2011 by aseasyasriding

The Mayor’s Director of Environment and Cycling Kulveer Ranger appeared on Vanessa Feltz’s BBC Radio London show this morning. Below is a transcript –

VF – Let me go straight to Kulveer Ranger. He’s director of environment at the Mayor’s Office, he’s responsible for all of this. Hello Kulveer.

VF – Okay, I’ve got a question for you straight in front of me from Ozzie, and Ozzie says, could you please ask Kulveer Ranger why we don’t have cycling proficiency tests for anybody who fancies taking out a Boris Bike, because we do see Boris Bikers wobbling about the place, they are a danger to themselves, they are a danger to everybody else. Everybody loves the fact that they’re cycling, it’s good for their figure and it’s good for their heart, we’re all going to save money in the long run when they don’t have a heart attack and go into hospital – but in the immediate hour, it’s terrifying.

KR – You know, that’s a very sensible question Vanessa. And what I will say is that we do fund all boroughs to provide free training for anybody who wants to have cycle training, which used to be called cycling proficiency, and is now called Bikeability. And we’ve been funding that as part of a programme – an ongoing programme – to enable as many people as possible to get trained. In fact in the last year we’ve had 48,000 people be trained through boroughs, and this is there. So I say to anybody who wants to get some additional training before they get on a bicycle, or now they’re cycling, just speak to your local borough – through Transport for London and the Mayor’s office, we do fund them, and if you can’t get it through your borough, just contact TfL, and we’ll make sure you get some training.

VF – But what about the idea of making it not optional, but compulsory? Because obviously if you don’t bother going, and you decide it’s going to be great to do a bit of cycling, off you go… you know, sometimes you can see these people, it’s almost as if they’re wearing badges saying ‘I don’t really know how to ride a bike and yet here I am in Piccadilly Circus’. And you’re thinking, ‘hang on a minute mate, this is ridiculous’.

KR – It was one of my primary concerns – and the Mayor’s – before we launched cycle hire, that we wanted to make sure that anybody who got on a bike would have a sense that they need to be aware, they need to feel safe and confident, which is why a lot of the process that people have to go through as they either register, or even as a casual user, try to get a bike out, means they must read the safety code that there is, and understand some of the issues there are. And we do see a lot of people doing that, and making sure that they’re aware of being aware of other traffic, being aware of safety equipment, and so on and so forth. Which has resulted in us having, thank God, so far, very few accidents with the cycle hire scheme.

VF – And what about these two fatalities at the Bow roundabout, and the Superhighway? We’ve had all sorts of suggestions about what’s wrong, about the convergence of the Superhighway with this roundabout, about the fact that it is an unworkable combination factors, it’s incredibly hard to get round it safely, and that something needs to be done right now. Does it, and if so, what will it be?

KR – Well I have to say we are looking at this roundabout specifically. Obviously there was a previous incident on it, you know, firstly, the tragedies are immense. We feel the immense sadness that the families of these people have when they lose a loved one, and I want to say that absolutely first up. But we are looking at this roundabout. We are going to make sure that every single… Any accident, any fatality, on London’s roads, with a cyclist… Transport for London, working with the Metropolitan Police, investigate absolutely, to understand what exactly happened, was there something we could have done better, or was there something that the driver or the cyclist could have… We try to work out what happened, and then we make the difference. We do make the change to whatever that specific engineering change could be, or if there’s signage, or if there’s something else we can do, we will definitely do it. The fundamental point is that over the last ten years, there has been a huge increase in cycling in London. When the Mayor came in, we realised this was just going to continue, and I brought in a lot of cyclists’ groups, to say, ‘what is it that you want in London, to help cycling?’ And what they said to me – and to the Mayor – was, ‘we want to drive… to cycle, on the main roads, because we want the quickest routes from A to B. We don’t want to be going around the back streets, we want to be with traffic.’ And the difficulty there was, how do we make it safer? And what we decided was, that we would create these routes of Cycle Superhighways, to define the space, on those main roads, where cyclists can know that they can be on, and be clear, that’s an area for them, and other road users would find that they could understand, that’s where they’ll see cyclists. But apart from that, we’ve also, as I say, part of this programme, worked with hundreds of businesses, I think over two hundred businesses, as part of the Superhighway work, to provide safety information, about parking information…

KR – No, God no, Vanessa. We are not waiting for fatalities, we are working on this immediately. We’ve been working on this constantly. Behind this increase in cycling, the primary focus has been safety. The very first thing we did on cycling was to issue a cycling safety action plan, with 52 specific actions, including the use of new kinds of mirrors, better lane management technology, the civils run engineering [I think? garbled], looking at how we actually identify conflicts between cyclists… an immense amount of analysis has been done, and will continue to be done, and we will continue to put cycling at the h… safety at the heart of cycling, because we know, that’s where we need to focus.

VF – Kulveer, thanks very much for joining us.

And that was it. An extraordinary, dissembling performance. If it seems garbled, that because it was, the garbling stemming from Ranger continually having to stop himself from saying that safety itself on London’s roads is the Mayor’s overriding priority. He has stop himself from saying this, not just because it would be an outright lie, but also because it would commit Transport for London to making changes – changes that would affect the flow of motor vehicles.

It is ‘smoothing traffic flow’ that is at the heart of the Mayor’s transport policy, not the safety of people using the road network, which is subordinate to pumping motor vehicles through junctions. If safety was the priority, Bow roundabout would have pedestrian signals, and it wouldn’t be a deathtrap for cyclists either. As it is, the safety and convenience of pedestrians and cyclists has been sacrificed or ignored, as it has been across London, where Ranger’s much vaunted Superhighways disappear just where they are most needed, at junctions. 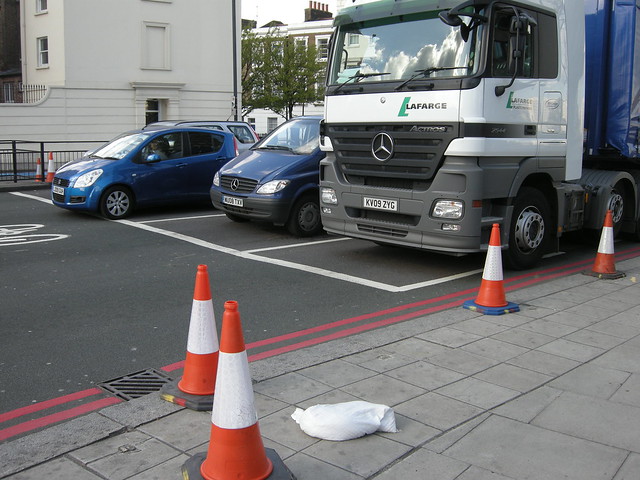 This is the junction of Millbank and Vauxhall Bridge Road. I do not have a more recent photograph, but the cycle lane and ASL here has simply been repainted blue – it is part of Superhighway 8. Now, a genuinely safe design here would involve taking one of those four lanes away from motor vehicles, but that would, of course, increase the amount of ‘stacking’ of those vehicles at this junction, and interfere with ‘smoothing traffic flow’.

So the real priorities of the Mayor of London, and Transport for London, are transparently obvious from photographs like these, which you can take at countless junctions across London. The safety of cyclists is subordinate to the number of motor vehicles that can be pushed through a junction during a green signal. The reason why cyclists are being killed by left-turning lorries at locations like this is because the cycling facilities – many of them Superhighways – are utterly compromised, and utterly superficial.

All Ranger can do is say that the Mayor and TfL will put ‘safety at the heart of cycling’, which is meaningless.

Please pick apart the rest of his waffle in the comments.

UPDATE – Correction. The Superhighway at the location shown above – Millbank – actually disappears, as you can see in this picture from Cyclists in The City.

The entire left turn lane has been painted blue after this photograph was taken, but it is simply a vehicle lane. This is safer than the ludicrously narrow cycle lane that previously existed here, but still serves to illustrate how provision for cyclists is compromised, given that the paint suggests they scoot up the inside of vehicles in a left-turning vehicle lane, in order to go straight across the junction.

5 Responses to Kulveer Ranger on BBC Radio London, and how safety is not a priority for the Mayor