Cycling as a stress-reliever, in Sweden and Horsham

Posted on December 7, 2011 by aseasyasriding

Here’s a good comment piece from the West Sussex County Times, published in last week’s paper. Curiously, the paper’s website suggests that it was written by Conservative Party Chairman, and local MP, Francis Maude – but that isn’t the case. It was written by Sarah Page.

Rather pertinently, given my post yesterday, it addresses the issue of cycling, and stress and anxiety. It runs –

Why cycling to work is good… and bad

The secret of a good night’s sleep is to get on your bike and cycle to work. That’s according to a new scientific study which says people who drive to their job suffer from greater anxiety and are more likely to sleep badly. Whereas if you cycle to work, the exercise will prove an antidote to stress and promote feelings of wellbeing.

That’s all well and good – as long as your bike journey doesn’t involve cycling over the railway bridge in North Street, Horsham. There can’t be many more stressful routes for cyclists in the district. Or for car drivers, come to think of it. And there’s no way that cycling on that stretch of road could help to send you to the land of nod after a hard day’s work. It’s more likely to keep you awake. The road is on a hill with a blind bend and a living nightmare if there are two cars passing each other, let alone a cyclist or two as well.

The On-Yer-Bike study comes from Lund University in Sweden and is being highlighted by Halfords. Spokesman Charles Ashwell said: ‘Cycling builds exercise into the daily routine and is a fantastic antidote to the stressful lives we lead.’ No doubt it is. But it must surely depend on the state of the roads on which you cycle and the amount of rush-hour traffic whizzing past.

Here is the road in question, looking down the hill, towards the town centre – 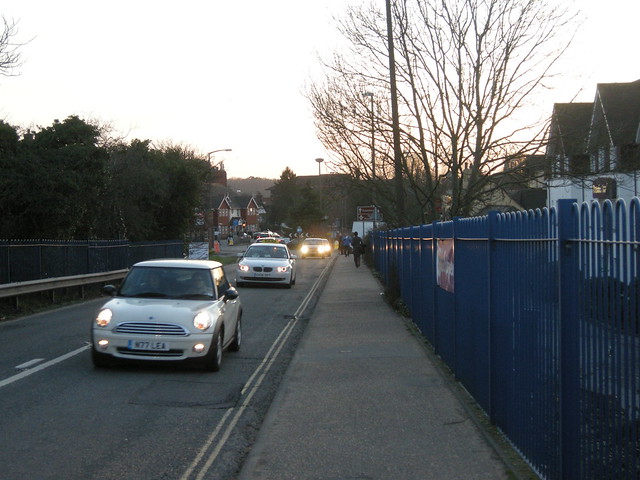 It’s an arterial road that carries almost all of the motor vehicles heading in and out of Horsham, from and to the north-east. Unfortunately, as it is composed of an embankment, running up to a dog-leg railway bridge, it feels narrow and claustrophobic, hemmed in on both sides by barriers. As you labour up it on a bicycle, you approach the blind corner that Sarah Page mentions. 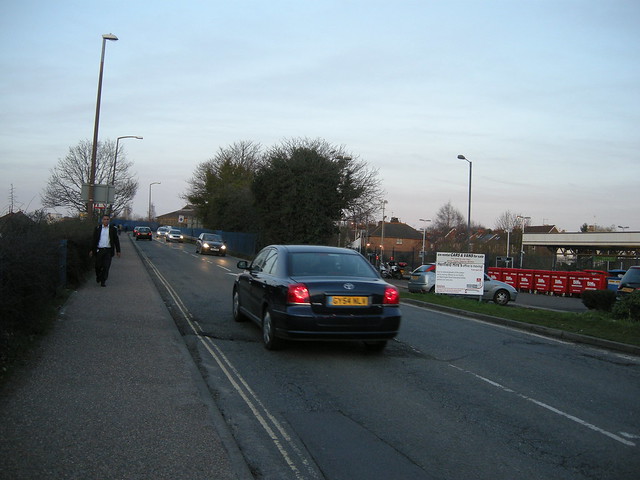 In my experience, people often ignore the solid white line that starts halfway up the hill, and overtake without any thought for the fact that vehicles might actually be coming the other way. Below, you can see that blind corner, on a different day, outside of the rush hour – 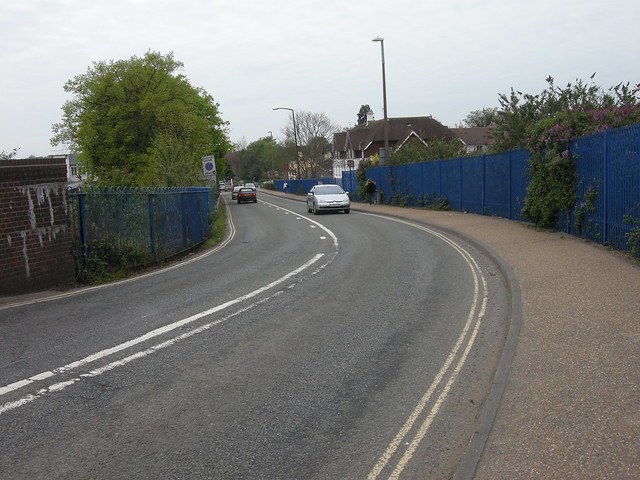 Sarah Page – who I think it would be fair to guess does not ride a bicycle around Horsham, but I’m willing to stand corrected – is quite right to point out that is rather unpleasant to cycle on this section of road. I try to avoid it when I can, especially when I am going up the hill, and my speed relative to motor vehicles is lower. (The horrible surface doesn’t help matters much either – look at that tasty disintegration under the black car in the second photograph).

Riding a bike might relieve stress and anxiety in Lund – but not at this location in West Sussex. In fact it rather increases it.

Horsham is only around 2-3 miles in radius, and largely flat. To me, that suggests that the bicycle is (or rather, could be) an entirely feasible mode of transport for most residents, for a great number of trips, and should, given the right conditions, be used for far more journeys than that reflected in the current 1% modal share in the town. But I can quite understand why Horsham’s residents are not choosing to use their bicycles when they have to deal with these kinds of road environments.

If we dig out the actual piece of research that inspired Sarah Page’s column, by Erik Hansson, and published in BMC Medical Health (pdf), we find that it actually has little to say about cycling, using it only as a benchmark against which to measure the self-rated health, and sickness absence, of people who use cars to commute. The study was, however, carried out in southern Sweden, where the paper notes that

There are relatively extensive networks of bike lanes throughout the region, encouraging cycling

Hmm. Immediately I am put in mind of another variable that might in part account for why Swedish cyclists are less stressed and anxious than their car-using counterparts, beyond the simple choice of pedal power.

Using a bicycle to cross a railway on a road in Lund. Spot what may account for this Swedish cyclist’s low stress level.

2 Responses to Cycling as a stress-reliever, in Sweden and Horsham