Posted on December 9, 2011 by aseasyasriding

Heading back from an excellent Street Talks at Look Mum No Hands on Tuesday evening, I found myself cycling south on Blackfriars Bridge, on my way to Waterloo. This is the location of a disastrously poor cycle lane, the lethality of which you can see in the video below from rogerhotuk –

The main problem is that it is far too narrow, especially with no escape to the left as a consequence of the hoardings, and, secondarily, that vehicles – especially longer ones like the bus in the video – will inevitably track across it at the kinks to the left along its length. Cycling in this lane is dangerous – full stop.

On my visit on Tuesday, however, it looked as if some action had been taken. Minimal action – but action nonetheless. Some cones have now been distributed outside of the cycle lane, offering some measure of protection to cyclists choosing to use it. 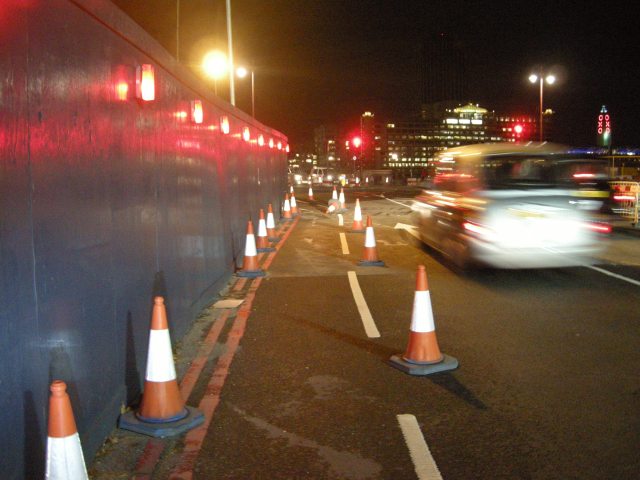 You can, however, see direct evidence of the ‘corner cutting’ issue I mentioned above – one of the cones on the apex has been knocked over. 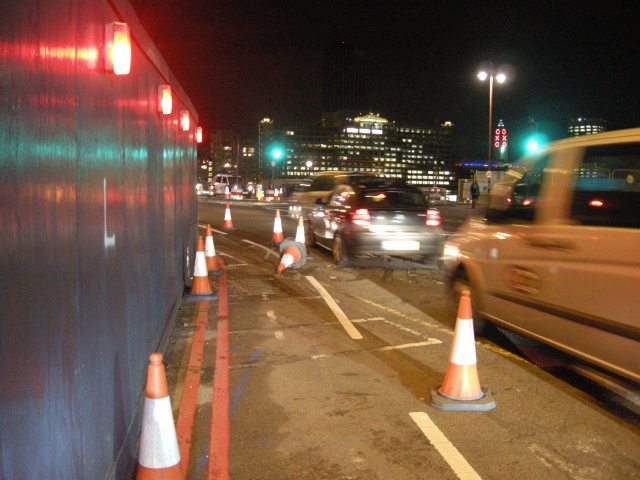 An indication of just how close vehicle are passing here.

I wobbled around this cone, and progressed to the point where the hoardings end. This was where the cycle lane simply ceased, as you can see in the video; it has now been ‘extended’, but only with paint, which sadly doesn’t do anything to address the root problem. In any case, there is now a difficulty. 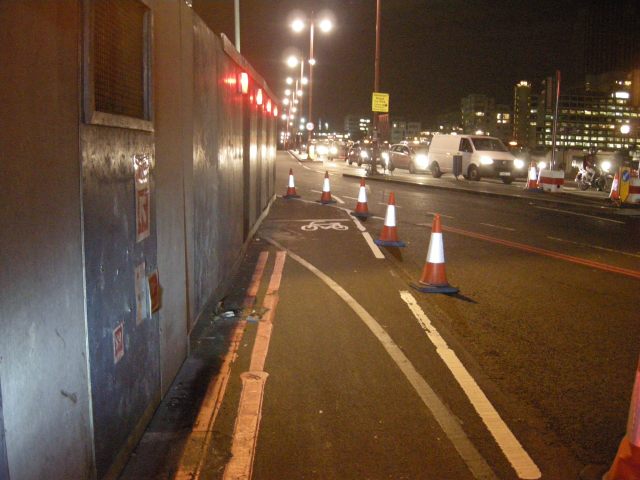 It is at this point that I realise that the cones ahead are in my way. 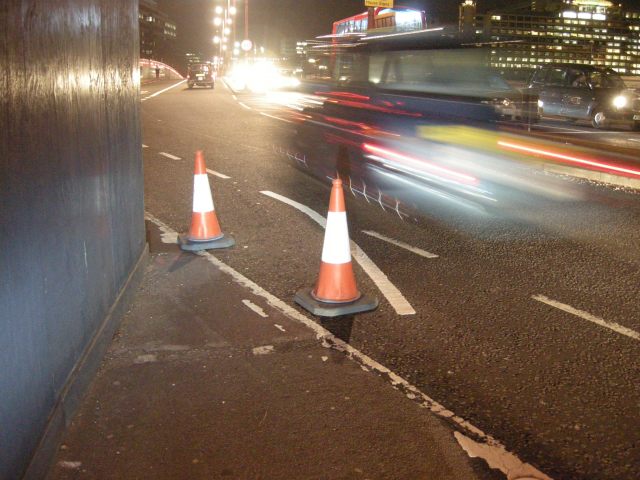 They’ve been placed in the cycle lane, at precisely one of the most dangerous points. Anyone using the lane has to weave their way through them, just as vehicles are, again, cutting the corner, like the taxi you can see whizzing past in the above photo.

So what’s the thinking here?

On reflection, the only logical explanation I can come up with for the presence, and distribution, of these cones is not protect the cycle lane at all, as I had first guessed.

It is to cone it off.

Doubtless someone has informed the authorities that the cycle lane is rather dangerous. The responsible parties have leapt into action, and used the standard technique to prevent the use of a lane – coning it off.

Cones. That’s how you stop motor vehicles from using a lane, isn’t it? They can’t get inside them.

It looks, to me at least, like precisely the same method has been employed to prevent the use of this cycle lane; unfortunately, it has been employed without any consideration of the fact that bicycles can, quite easily, get inside cones, and use the lane regardless.

So we have one of two scenarios playing out here.

(On a more positive note, things can be done properly, as this example on Royal College Street demonstrates – 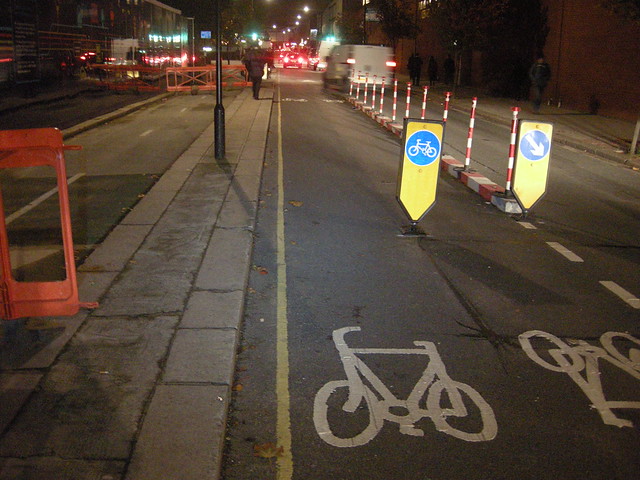 This entry was posted in Infrastructure, London, Road safety, Transport for London, Uncategorized. Bookmark the permalink.

9 Responses to Coned off