Posted on January 3, 2012 by aseasyasriding

Just before Christmas, I had the opportunity to cycle along the new two-way layout on Piccadilly.

This used to be a one-way street, with vehicular traffic only allowed to travel in an easterly direction between St. James Street and Piccadilly Circus. A contraflow bus lane ran westwards, as you can see in the picture below. 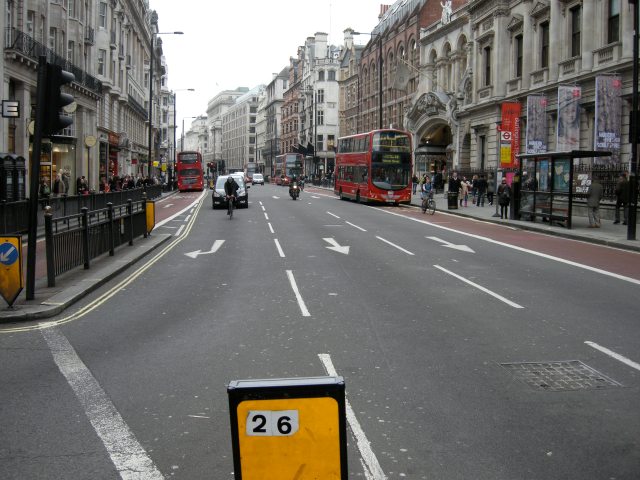 Over the course of this year, this arrangement has been stripped out, replaced by two lanes in each direction, and a central median strip, a kerbed lane divider principally designed to help pedestrians cross the road.

It’s not great for using on a bicycle.

For a start, you used to be able to make a right turn onto Piccadilly from St James Street. For some reason, you can’t any more. There is a ‘no right turn’ symbol on the traffic lights at the top of St James Street. 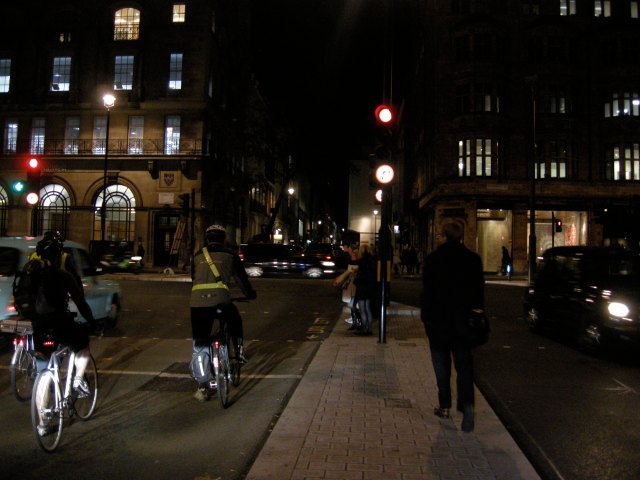 If you do attempt to turn right here, you will end up coming into conflict with pedestrians crossing on a green phase at the lights on Piccadilly. Now, it’s good that pedestrians have a single phase to cross the entirety of Piccadilly, rather than the unpleasant, and often caged, two- or even three-stage crossings that are prevalent across the rest of London. But evidently the time allocated for this has come at the expense of a right-turn light phase.

I decided to dismount here and use the pedestrian crossings to get onto Piccadilly eastbound, rather than head north on an uncertain detour.

Once on Piccadilly, it quickly becomes clear that the whole length of the street is clogged with vehicles. The view from the pedestrian crossing by St James Street – 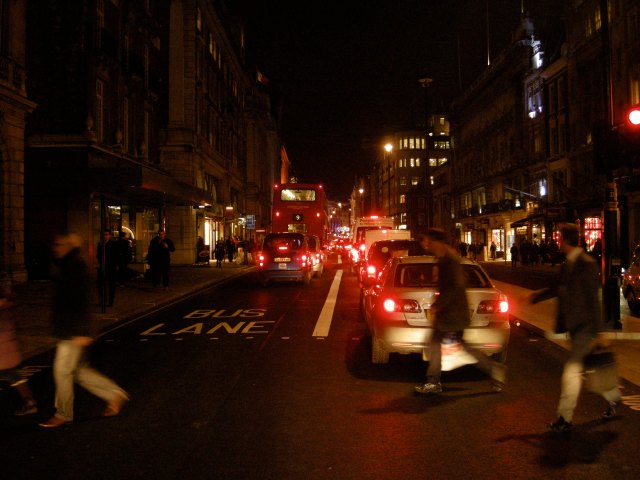 All the way to Piccadilly Circus – jammed.

This is not nice to cycle through.

At several points, despite the extraordinary width of the vehicle lanes here – especially the bus lane, which looks as if it could accommodate two cars side-by-side – my progress was completely blocked.

It would have been very easy to allocate some of the large amounts of space on Piccadilly for a safe, direct and continuous route for bicycles, that allowed them to bypass all this traffic without difficulty. It hasn’t happened, probably because the bicycle as a mode of transport was not even considered when the plans were being drawn up. So people using bicycles have to struggle through a clogged and hazardous road environment.

This entry was posted in Infrastructure, London, Road safety, Transport for London, Uncategorized. Bookmark the permalink.