Posted on January 14, 2012 by aseasyasriding

A video showing some cycling in Holland.

As you can see, the road is aptly named, given that its conditions for cycling match up so perfectly with the Dutch model.

It took me six minutes to negotiate the length of this road, just over half a mile long – little more than walking speed, a frustratingly slow rate of progress.

Ostensibly, it is a single carriageway stretch of road – 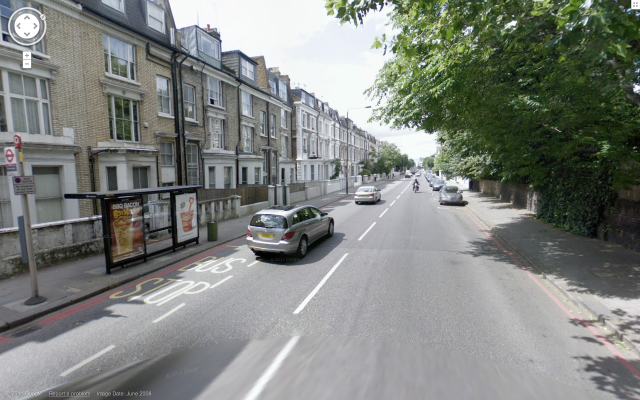 but at times of traffic chaos (this was at 4pm on a Tuesday, while the nearby Hammersmith Flyover was closed completely) we have two streams of traffic in one lane, making progress by bicycle a frustrating experience.

Despite it having carriageways that are wide enough to accommodate two lorries, side by side – and despite it being designated as a single carriageway road – I’m sure Holland Road is one of those London streets where, as Boris argues,

the existing layout of roads and buildings means that there is simply not enough space to provide segregated cycle lanes without adversely impacting other users.

A cycle path along this road would make using it by bicycle – in rush hour, or otherwise – a pleasure, rather than a somewhat hellish and unnerving experience. It might even give  some of those people sitting in this horrible jam in their cars an incentive to switch to a bicycle, and in so doing reduce congestion, improve public health, reduce road noise, improve house prices and amenity, and air quality.

As things stand, however, they have no such incentive; negotiating this road by bike is slow, dangerous and unpleasant.