Posted on April 4, 2012 by aseasyasriding

As promised in my earlier review of the French city of Strasbourg, here is my report on Paris, a city that I found rather less civilised for cycling than the Alsatian one.

I have, as it happens, already written about Paris, following a short visit there last summer. That post focused, rather positively, on the aspects of the city that I found to be slightly better than London. These included the street closures to motor traffic, common in the Marais district; the closure of the Parisian equivalent of the Embankment to motor traffic on Sundays; the slightly greater ease of walking about the city; and some small measures being taken to improve the cycling environment, including two-way cycling on one-way streets, and some off-carriageway cycle paths.

Indeed Paris came to be mentioned recently for the notable fact that there was not a single cycling fatality in the city last year, compared with the 16 in London. I have to say – and I hope this will become apparent from what follows – I think a large part of this discrepancy must be down to luck and fate, rather than more intrinsic merit in the way the streets are arranged. It did appear – to me at least – that there were fewer HGVs, particularly construction lorries, using the streets. This is probably because central Paris is not so much of a building site as much of central London is at present. Large new buildings and construction projects are few and far between. Equally, while there are Parisian gyratories and one-way systems, they are not quite as obviously like a motorway as they appear to be in London, and other British cities. Both these factors could be influential.

But Paris is not all it is cracked up to be.

Perhaps it was because I had just arrived in Paris from the relative paradise of Strasbourg, but I found myself less inclined to be generous towards Paris this time around. Those cycle paths were still in evidence, and they were of a reasonable quality. However – being less generous – while the width and surface is adequate, many were quite clearly pavement conversions, rather than an appropriate reclamation of carriageway space.

Below, a particularly noticeable example, near the Gare de l’Est. 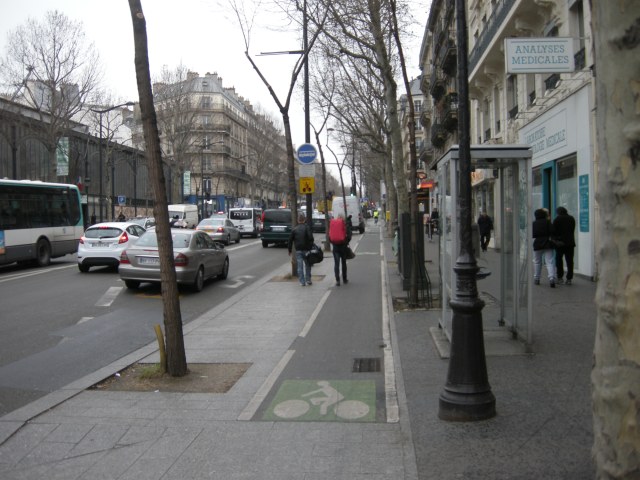 The amount of street width available here is incredible; the pavement itself is enormously wide. The path itself, however, is not, and seems more than slightly half-hearted. (Note also the discontinuity at the start, by the junction where I am standing.).

Elsewhere, there were rather better cycle paths – this example is in the Bastille district.

Cycle paths like this one, separated from motor traffic, either by vehicles, or with a kerb, or with both, appeared to me to be more common than they are in London, although as I have said the quality leaves something to be desired.

However, these Parisian cycle paths that involve some form of carriageway reclamation only seemed to be in evidence in places which were already reasonably quiet, like the location in the photograph above, or here along the Canal Saint-Martin. 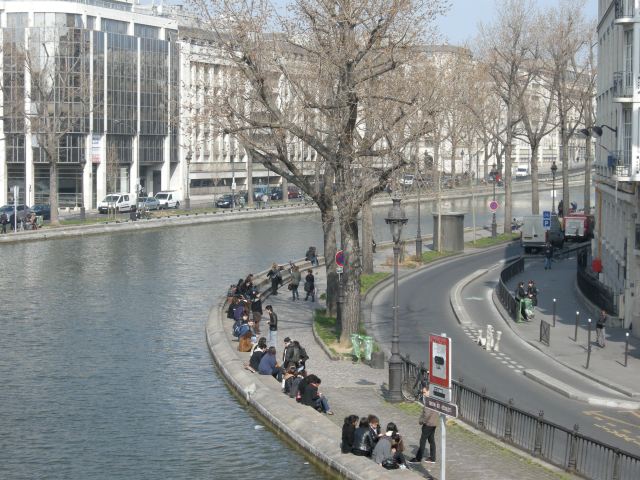 My impression was that on busier roads, cycle paths would either go on the pavement, creating conflict with pedestrians and taking space away from them, or they would be non-existent. The Parisian version of ‘smoothing traffic flow’, in other words, seemed to be setting the priorities – the reduction in carriageway space for motor vehicles was rare indeed.

In fact, in places, the amount of space given over to motor vehicles in Paris is quite absurd; for instance, the Place de la Concorde.

It is hard to imagine anywhere in western Europe where such an extraordinary acreage of urban space – prime urban space – is allocated entirely to motor vehicles. Spot the three people stranded while trying to cross this vast desert.

As this road meets the Rue de Rivoli, we have a street arrangement that makes even the Elephant & Castle look slightly sane – a 12 vehicle wide queue at the lights, all about to scream off in the same direction. This cycle rickshaw was the only bicycle I saw passing through here. I don’t envy the passengers.

The Rue de Rivoli itself is, note, a one-way street. I was walking through here at mid-morning, a reasonably quiet period of the day. Google Streetview provides a good indication of what the Rivoli looks like at, and around, rush hour. 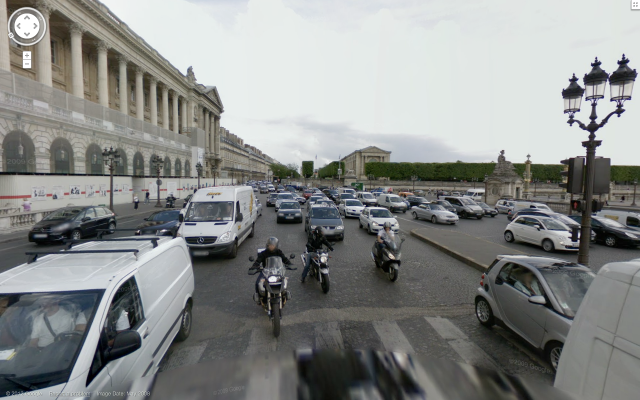 Imagine being on the right of this street, in the cycle lane that is just about visible behind the dark car, and negotiating your way across to make a left turn, on a bicycle.

Most Parisian streets are plentifully wide, quite obviously wide enough to accommodate segregated provision for cycle tracks. They’re just not there when they needs to be. Spot the cyclist here, on the Quai de Montebello by Notre Dame. There is a narrow cycle lane here, where on another occasion I saw a bus squash a cyclist up against the kerb as it rolled up to the lights. 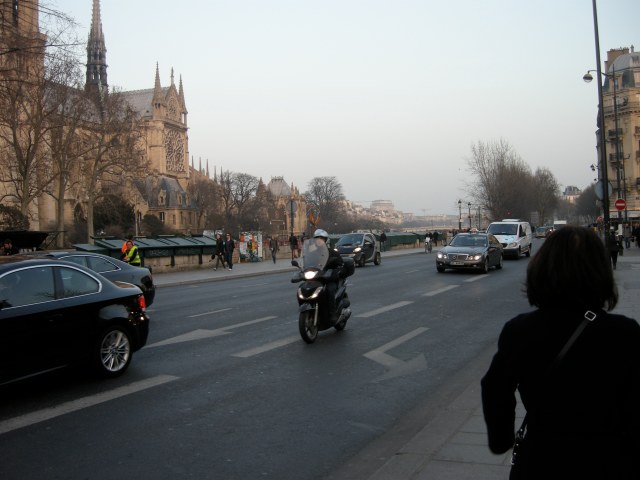 Likewise, how inviting is the Place de la Madeleine for this barely visible cyclist? 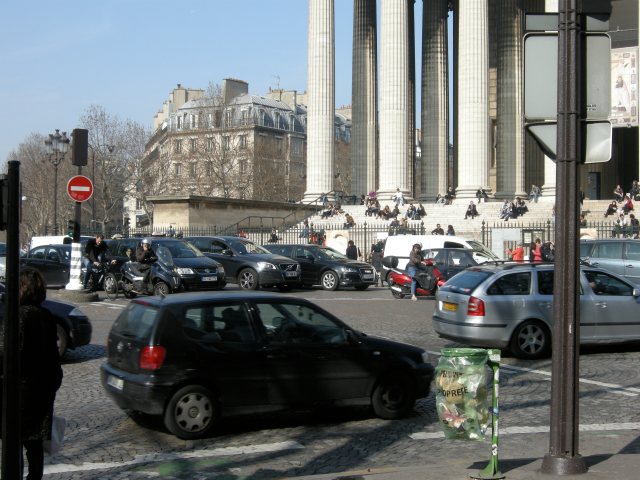 It’s a fairly horrible gyratory; just one that is Parisian, rather than British. 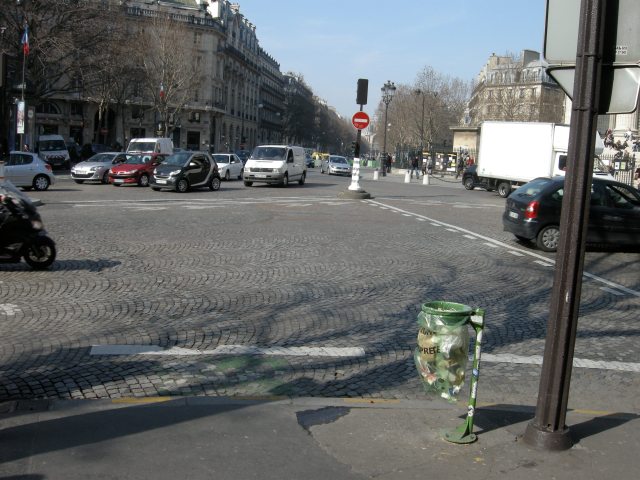 There are marked cycle lanes on the roads approaching the church, marooned as it is in a sea of swarming cars, but they are pretty useless – often blocked by vehicles, just when they are needed. 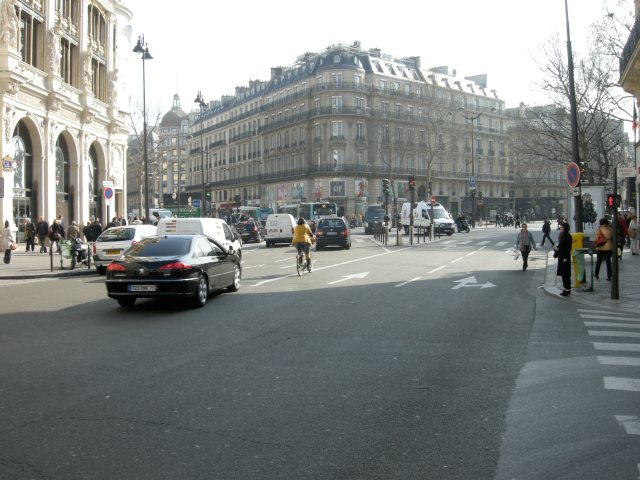 Note also the taxi racing down here – the signs don’t explicitly permit taxis, but I didn’t see much evidence of compliance. 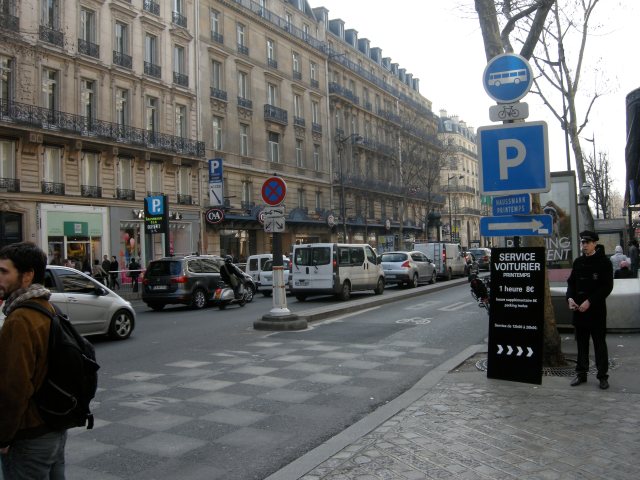 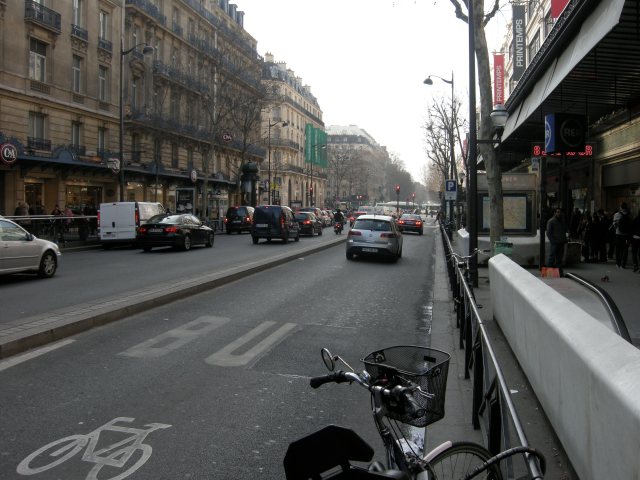 Probably not much fun to cycle in, in short.

There are one-way streets on which it is permissible to cycle in both directions (this is something which I noticed, on my previous visit, as being rather more prevalent than in London, although this may swiftly change now that UK guidance has been amended). Unfortunately the typical solution is a desperately narrow contraflow lane.

Other streets have no provision whatsoever, and are clogged with parked vehicles on both sides.

Many streets, which should in principle be calm shopping environments, have appallingly narrow pavements, and two lanes of traffic speeding in the same direction.

Other streets, such as the Rue Saint Germain, are enormously wide, yet have no contraflow provision whatsoever. This chap is taking matters into his own hands, briefly cycling against the flow of traffic, at great personal risk.

Others use the pavement to negotiate one-way streets.

And the pavement is, more generally, quite often an inviting way of cycling on busy and hostile roads.

Paris does, of course, have a hire bike scheme that is even more widely used that London’s (indeed, it provided the template for the London scheme). A close inspection at the controls of a Velib machine, however 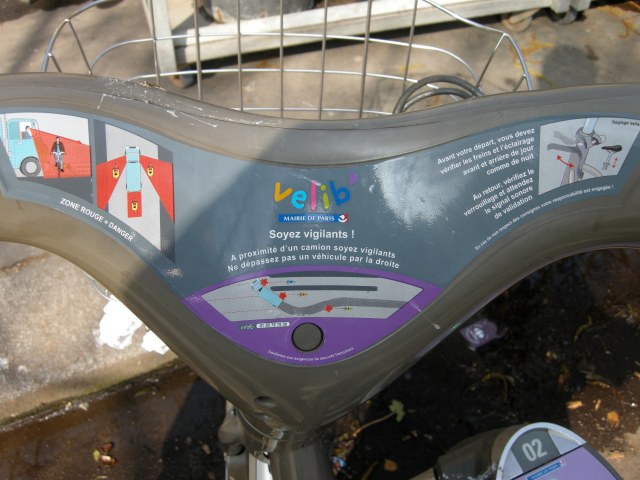 reveals plentiful warnings about staying out of the blind spots of vehicles, and about not going up the inside of them; warnings that wouldn’t really be necessary in a civilized city, that didn’t expect vulnerable users to mix it with heavy goods vehicles.

There are European cities from which we can learn lessons about how to improve conditions for cycling; I’m far from sure that Paris is one of them. 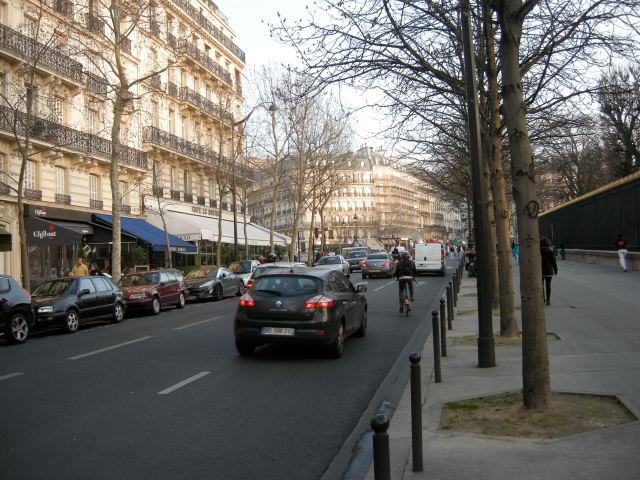