My undoubted highlight of Saturday’s Big Ride in London was entering Piccadilly from Hyde Park Corner and seeing, for the first time, the full extent of the protest. 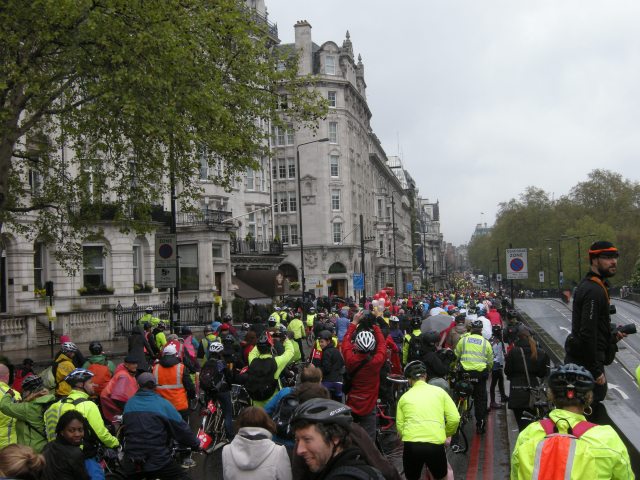 As one of the last to set off, and having been waiting for half an hour to cross Park Lane to join the tail end of the ride, I had already had some idea that this was going to be a big protest, but this was really quite incredible. From Hyde Park Corner, where I was standing when I took this photograph, the ride stretches off into the distance, actually out of sight – all the way to the Ritz Hotel, about half a mile away.

Given the wet, cold and windy conditions, this really was a fantastic turnout, one that I hope will send a clear message that the status quo is nowhere near good enough, not even for those who currently feel confident to cycle in London on a regular basis, let alone for those young children on the ride who were cycling around central London in complete safety, for once.

This particular stretch of road is, ordinarily, a race track. You can see what it normally looks like on the right hand side of this photograph, showing the west-bound carriageway. 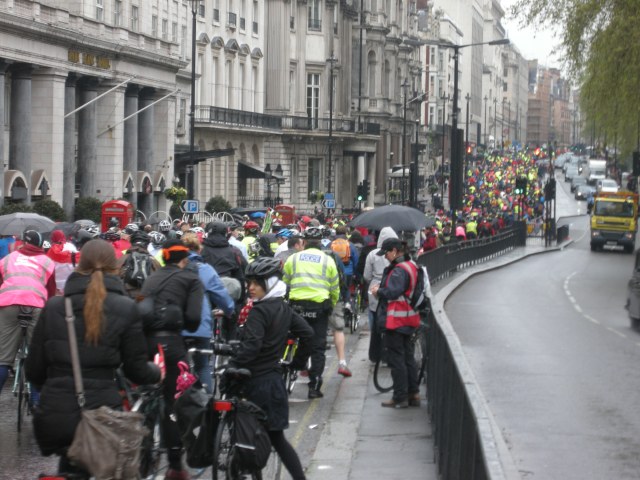 I used to cycle along the eastern section of Piccadilly fairly regularly on my old commute, and I have to see I never saw a child cycling there. (I can say that with some confidence, because it would have been fairly startling, enough to stick in the memory.) Looking at the photograph above, it’s not very hard to see why, with lorries thundering along a dual carriageway, and cars jostling for position. No consideration has been given to cycling along this road, despite it running from Hyde Park right into the West End, an ideal route for families on a weekend trip.

We need to ask serious questions about why large swathes of society – the young, the elderly, females, the disabled, even just the less nimble –  have effectively been excluded from cycling on our streets, despite their willingness to cycle under safe, pleasant conditions. I hope Saturday’s ride is just the start of that questioning process.