Yesterday I wrote about a potential area of weakness in London Cycling Campaign’s Go Dutch strategy; the principal objection was that in maintaining that cyclists should still be able to choose whether or not they use the road, or cycle tracks, compromise on the quality of those cycle tracks becomes harder to resist, especially as the Mayor seems to view off-carriageway provision as some kind of ‘training’ facility for nervous cyclists, before they venture onto the road.

Unfortunately this isn’t the only area in which LCC’s admirable Go Dutch principles could be co-opted and watered down by a Boris Johnson administration. In his presentation of the design principles of Love London Go Dutch at last month’s Street Talks, Richard Lewis said

I’d like to put a question to you – is this street out here [Theobald’s Road] an appropriate location for that type of [segregated] infrastructure presumably segregation?. Or is it kind of a bit ‘I’m not sure?’ Is the volume of cyclists using this street enough to calm the motor traffic down, so that actually it becomes safe and inviting for cycling? Or do you think there should be dedicated infrastructure?’ 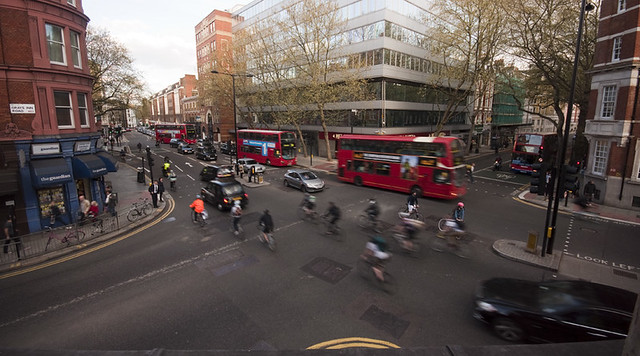 In other words, some streets could become ‘safe’ in virtue of the number of cyclists using them, rendering infrastructure unnecessary.

Now, there may be some truth in the ‘safety in numbers’ effect; it certainly seems to apply in nature, where the members of flocks or shoals tend to be statistically less likely to fall victim to a predator than if they were travelling alone. This ‘shoaling’ effect, however, may not be quite so helpful in discussing cycling, because cyclists only travel intermittently, and by chance, in shoals. Quite often they will be travelling alone.

The standard graphical demonstration of a correlation between numbers and safety (originating with Jacobsen) is not as helpful or instructive as it is often made out to be, because, as we all know, correlation is not causation. The greater rate of cycling in some European countries could be a result of more safety, rather than their greater safety arising from their greater numbers. In addition, and even more problematically, the graph simply fails to take account of a wide range of variables that might also have an effect on cyclists’ safety, of which, perhaps in order of importance, we could name physical infrastructure, policing, speed limits, even (if we are looking at a rate of cycling fatalities) quality of emergency medical treatment.

Even if we do accept the potentially flawed logic that safety can simply arise from numbers, it is problematic to adopt it as a guiding principle in determining whether or not a street needs infrastructure, for several reasons.

Firstly, it ignores the fact, apparently appreciated by LCC, that infrastructure is needed primarily for reasons of subjective safety – to make the experience of cycling seem safer and more pleasant. ‘Safety in numbers’ does little or nothing to achieve that effect, although it may, arguably, have some effect on objective safety.

There was a clear demonstration of this when I left the Yorkshire Grey, after this very talk. Heading towards Farringdon, I was in the company of several cyclists, but that did not prevent me from being subjected to some honking and a close pass from a lady in a Mercedes as I passed another cyclist down the hill. It wasn’t very nice. The road was no more pleasant for a novice to cycle on than if he or she had been completely on their own, and for that reason alone ‘safety in numbers’ shouldn’t be a reason for deciding not to change the environment. A requirement of infrastructure is to make the cycling environment more pleasant; this cannot be guaranteed by ‘safety in numbers’.

Indeed, if you listen to the audio of the talk, it is punctuated by the roaring of engines, and honking – despite there being plenty of cyclists passing through at that time of the evening. The environment remained deeply uncivilised for cycling, and hostile to any nervous person; cycling on a road busy with motor traffic is usually just as unnerving whether you are on your own, or with a handful of other cyclists. ‘Safety in numbers’ is not a way of making an environment subjectively safe in a way that cycle paths can, and it should not be proposed as a substitute for them.

The other problem, as alluded to earlier, is that the ‘numbers’ that are proposed to guarantee the safety of cyclists, by the ‘shoaling’ effect, are never uniform, peaking only for a few hours at the start and end of the working day. There will be no ‘safety in numbers’ later in the evening, or during the day, when cyclists will quite often be travelling completely by themselves.

The Dutch would never use ‘safety in numbers’ as a substitute for civilising an environment for cycling. Indeed Fred Wegman, the managing director of SWOV (the Dutch Institute for Road Safety Research) is dismissive about its effects [pdf] –

I do not expect that just a greater number of cyclists will on its own result in a risk reduction for the cyclist. On the other hand, I do expect that more cycling facilities will lead to lower risks. Policy that only focuses on an increase in cycling and at the same time ignores the construction of more cycling facilities, will not have a positive effect on road safety.

So it was a little worrying to see an LCC presentation discussing, even casually, whether it was viable as an alternative safety measure to cycling facilities, not just because of the reluctance of the Dutch themselves to rely on it, but especially because it seems to be a particular favourite ‘safety’ strategy of both our current Mayor and TfL. The latter have claimed that the ‘Boris Bike’ scheme will [pdf]

Likewise, in response to this question from Assembly Member James Cleverley –

Mr Mayor…. would you concede that a significant but often undervalued element of cycle safety is the herd immunity: the idea that, as increasing numbers of people cycle, the other road users become more used to cyclists, become aware of cyclists in their day-to-day driving habits and adapt their driving styles to accommodate cyclists?

Boris had this to say –

we need to hear some voices also making the key point that… that cycling is a good thing to do and it is becoming safer. The idea that there is safety in numbers and that you can create a culture of cycling is certainly right.

Relying on ‘safety in numbers’ is a particularly appealing strategy if you don’t really plan to do much for cycling, and cycling safety, beyond ‘encouraging’ people to take up riding a bike. It’s also a good way of being able to dismiss the claims of those who say that cycling is subjectively dangerous; the idea being that if you talk about how unsafe cycling feels, you discourage people from cycling, and hence make it ‘more dangerous’ by suppressing the numbers (this is the logic of this piece by Andrew Gilligan, and many others that have appeared in a similar vein).

It’s consequently a bit disappointing to see LCC potentially presenting it as a viable alternative to actually making streets subjectively safe for cycling. They have a great campaign, and some form of commitment from London’s politicians to start implementing it. For that reason I think they should be very wary of talking about ‘safety in numbers’ and its potential positive effects, because Boris is more than willing to ‘rely’ on it, instead of making changes where they are necessary.

This entry was posted in Boris Johnson, Go Dutch, Infrastructure, LCC, London, Safety In Numbers, The Netherlands, Transport for London. Bookmark the permalink.