This is the final post in a series on LCC’s Love London, Go Dutch campaign – the previous three are here, here and here

I am not especially precious about the form of infrastructure that might be put in place on London’s streets to make them more inviting for cycling, as long as it works, makes cycling feel subjectively safe for people of all ages, is fast, smooth and continuous, and privileges the bicycle as a mode of transport over the motor vehicle. Good design is good design, whichever nation it comes from.

That said, given that the London Cycling Campaign’s Go Dutch Campaign does, self-evidently, title itself after a particular country, I would expect that country’s infrastructure and practice to be used as a reference point (although obviously not one that has to be rigidly and inflexibly adhered to).

But unfortunately, in suggesting that on-carriageway provision should be maintained on busier roads, or that ‘safety in numbers’ or ‘shared space’ could be an alternative to providing infrastructure where it is required, the LCC seem to be losing sight not just of Dutch practice, but European practice in general. The Danes, like the Dutch, do not rely on ‘safety in numbers’ instead of changes to the environment, nor do they use on-carriageway provision alongside off-carriageway provision to signal that cyclists can use road, if they so wish. Nor do they try to keep cyclists in the carriageway as a way of calming vehicle traffic. To this extent, these features of the LCC designs are not Dutch, or even Danish, but a curious melange that tends to resemble the type of provision that already exists in the UK, at least in outlook, if not in quality.

On top of this we have some misunderstandings about Dutch practice itself. Much weight is often put upon the Dutch ‘strict liability’ laws in explaining why it is so much more pleasant to cycle in the Netherlands, and indeed why cycle paths work safely there (and why they might not work so well here). This tends to ignore the fact that strict liability

is only concerned with material damage and financial responsibility… this law is not concerned with allocating blame, or with imprisoning bad drivers.

Dutch drivers can, and do, drive badly. (A recent example is found in this Mark Wagenbuur video). It is unconvincing to suggest that being presumed automatically liable for the costs of a collision – and only in the absence of evidence – is sufficient to generate a far higher standard of driver behaviour than that seen in the UK. The reason passing through a junction on a segregated path in the Netherlands is safer than doing so in the UK is not because of strict liability, but because of better design. David Hembrow again –

There is no short snappy phrase for [strict liability] in Dutch because this is no more than an obscure part of the law which most people take little interest in. People don’t talk about this on a regular basis, any more than they do about other obscure parts of the law. Most people are not aware that the law here is different from elsewhere. Strict Liability has, at best, a very small role to play in keeping cyclists in the Netherlands safe.

So while Richard Lewis was correct to emphasise, in his talk for the Movement for Liveable London, the excellent way in which segregated paths are designed around and across junctions in the Netherlands, I think he was wrong to say, in this context, that

part of the problem we have in the UK is that we don’t have the same legal structure as they do on the continent, whereby drivers have more responsibility for the safety of vulnerable street users.

Keeping cyclists safe on segregated paths is dependent upon the quality of the design, not upon strict liability, which plays only a very marginal (yet overstated) role in the safety of Dutch cyclists. Tackling danger is achieved through the design of the environment, not through attempts to modify, in isolation, driver behaviour.

Richard also made a slight mistake in diagnosing how Dutch junctions work. The label on this slide 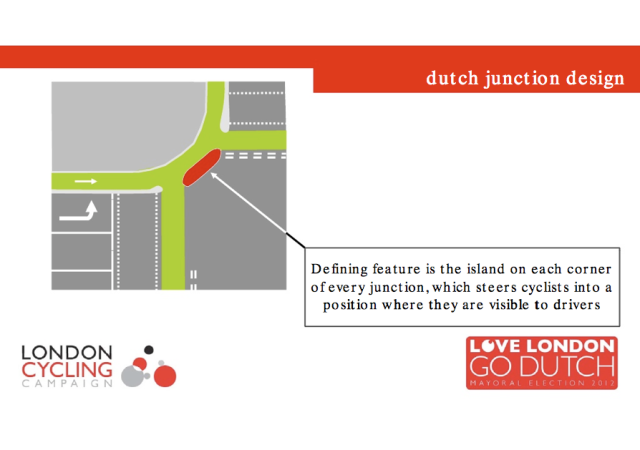 informs us that the kerb on the corner of junctions – marked in red – is designed to steer cyclists into a visible position, so that vehicles turning left will not miss cyclists as they cross the junction. Richard said that the kerb means

This is true, but the main purpose of that kerb is to protect cyclists who are turning left from motor vehicles which are turning left at the same time. It is very important to emphasise that cyclists going straight on across the junction (from left to right across the image) will very rarely come into conflict with left-turning vehicles, because in the great majority of cases those left-turning vehicles will be held at a red light while cyclists progress in that direction. Turning conflicts like this are very carefully eliminated under Dutch practice. The lights will either be configured to ensure that cyclists are not crossing at all while vehicles will be turning left, or will given them a head start in those rare cases where the movements are simultaneous (see this Mark Wagenbuur video for a full explanation).

It is the ‘head start’ model that seems to be favoured by Richard Lewis, rather than the total separation of turning movements of Dutch practice. This is why the LCC model of Parliament Square – 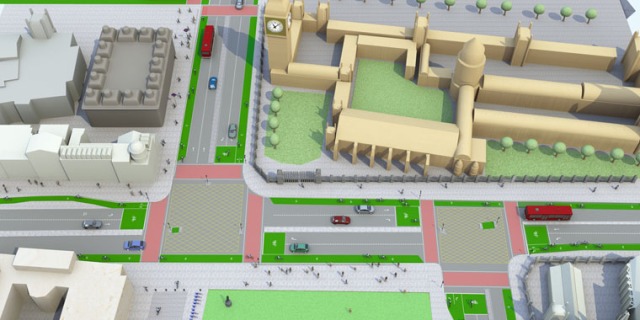 does not have those protective kerbs seen in the Dutch design. ‘Head starts’ are, I think, the only way to keep cyclists safe under a design physically identical to this – it would certainly be quite dangerous to expect left-turning cyclists to move forward, from the cycle tracks, at the same time as (potentially large) left-turning vehicles, given the lack of protection seen at the junctions in this design.

But two questions immediately present themselves – how long would this head start have to be, and secondly, what happens when cyclists arrive at the junction, in the tracks, while vehicles are already moving through the junction? These are obviously pertinent questions now that Transport for London are implementing a design quite similar to this LCC one at Bow Roundabout.

The answer to how long the head start might be, is, for TfL at least, not very long at all. Their video of how the junction phasings will work suggests that the green light for vehicles will change about a second after that for bicycles. Indeed, the amber light for vehicles comes on at the same time as the green light for bicycles, which suggests that law-abiding cyclists would be moving off at the same time as more impatient motorists. Even allowing for a deeper ASL, I suspect this is not a sufficient amount of time to prevent ‘left-hook’ conflicts of the kind that claimed two lives last year – especially if the cyclists are slower off the mark.

Just as seriously, there is the second problem of what happens when cyclists arrive at junctions like Bow, or Parliament Square, when vehicles are already turning left on a green light. There is nothing I can find in the LCC material to suggest that cyclists will be held at a red light, so I can only assume that cyclists will be moving up the inside of vehicles approaching the junction, and executing simultaneous left-turns with them. This is not a move that is conducive to safety.

By contrast, the TfL ‘answer’ at Bow is to hold cyclists at a red light for the entire duration of the green phase for motorists.

This is a very blunt and inconvenient instrument indeed. Oddly, however, it’s a safer option than that suggested in the LCC mock-up for Parliament Square, which appears to allow simultaneous unprotected left turns. The TfL ‘Bow’ option would naturally eliminate these left hooks by stopping cyclists completely, assuming perfect compliance – but unfortunately it is very hard to imagine all cyclists choosing to obey what would at first glance appear to be a pointless red light. I suspect plenty would jump that light, and the problems that the junction design attempts to solve would simply reappear in exactly the same form.

Richard Lewis stated that the TfL design for Bow is ‘on its way to really good’, presumably on the basis that it superficially resembles his designs for other junctions.

I’m not so sure. I think it could be on its teetering on its way to quite bad. TfL has purchased some safety for cyclists at the cost of great inconvenience for them. You will always arrive at a red light here on a bicycle, if you use the segregated route. To put this in perspective, if you arrive at the junction just as the vehicles are setting off on their green light, you will have to wait until that lengthy green phase comes to an end before you are even allowed to enter the ASL, where you will have to wait again, your only reward being a one second head-start over the vehicles waiting behind you. The extent of the wait, while people in cars are free to move across the junction in the direction you want to go, will probably be sufficient to tempt cyclists into jumping the lights, creating exactly the same dangerous situations that prompted this remedial work in the first place.

Now that Boris has (in principle, at least) signed up to Go Dutch, it’s vitally important that these kinds of turning conflicts – and methods that attempt to solve them which involve great inconvenience – aren’t suggested or allowed by London Cycling Campaign’s own designs and guidance.

35 Responses to Love London, Go Danish? Or even Go Bow?