This latter post showed that while the fatality rate for cycling deaths not involving motor vehicles was approximately similar in both countries (i.e. single person accidents, or involving pedestrians), the rate of fatal collisions for cyclists with motor vehicles, per billion km cycled, is over eight times higher in the UK than in the Netherlands.

Lorries account, disproportionately, for a good number of those UK deaths – while forming only 5% of road traffic, they are involved in 16% of cycling deaths (source – The Times). This was a point raised on the 17th January this year by Roger Geffen of CTC, when he appeared before another House of Commons Transport Committee, which was discussing road safety. This was before the Times’ Cities Fit For Cycling Campaign had emerged, so lacked some of the attention later House of Commons debates on cycling achieved, particularly that involving the ministers.

In giving evidence, Geffen rightly pointed out the particular danger posed to UK cyclists by HGVs, noting that

Before going on to observe that

We should be looking at lorry routeing and how we can simply reduce the number of lorries on the roads in our major towns and cities. We should be looking at the monitoring of drivers. The driver who was goodness knows how far over the limit and talking on his mobile phone had a whole history that should have taken him off the road. How come he wasn’t? There is a whole load of health and safety management.

We have to look at what continental Europe does. What do cities with far higher levels of cycle use do? In Holland, a lorry driver would be surrounded by a lot more cyclists. What are the solutions that are working and still mean that their cyclists are safer? The Government have many roles to play in investigating a lot of different, possible solutions to lorry safety and monitoring their effectiveness. That is important too. All of these things need to be monitored because we do not really know what works.

Unfortunately the Dutch SWOV road safety data does not appear to give a breakdown for the involvement of lorries in cycling fatalities, so I cannot find a direct comparison for the UK figures. It is a reasonable presumption, however, that the rate of fatal collisions for Dutch cyclists involving HGVs is as proportionately low, compared to the UK, as the fatality rate for collisions involving motor vehicles as a whole – that is, eight times lower than in the UK. (There are good grounds, as we shall see in this post, for assuming it might be even lower).

Roger Geffen rightly points out the routing of lorries is a major issue – keep the lorries out of some areas of cities and towns, at certain times, and you immediately minimise the risk posed to cyclists by cutting down on the exposure.

However, the section of his comments I have highlighted is particularly interesting; Geffen claims that in the Netherlands, a lorry driver would be ‘surrounded’ by many more cyclists, presumably as a function of there being many more cyclists on Dutch roads. And yet Dutch cyclists are much safer than their UK counterparts – the implication seemingly being that Dutch lorry drivers are much better trained, or better behaved, despite being ‘surrounded’ by cyclists, or even that that ‘surrounding’ itself has some safety implication.

The comment is curious, because in my admittedly limited experience of cycling in the Netherlands – a few weeks, in total, and around two to three hundred miles – I don’t remember ever seeing a lorry ‘surrounded’ by cyclists, or indeed ever really mixing myself with lorries.

To see if this was just a trick my memory had played on me, or whether my impressions were correct, I decided, in an idle moment last week, to scour the hours and hours of footage, and hundred of photographs, I took on the Cycling Embassy three-day study trip to Assen and Groningen last year, to see just how and when we mixed – or didn’t mix – with lorries.

It was quite hard work, principally because there were very few lorries encountered during the trip, and also because they were quite often at some distance. My memory of not really interacting with lorries at all was a sound one.

The results are below, both stills from video, and some photographs. I have circled the HGVs because in some cases they are hard to spot. 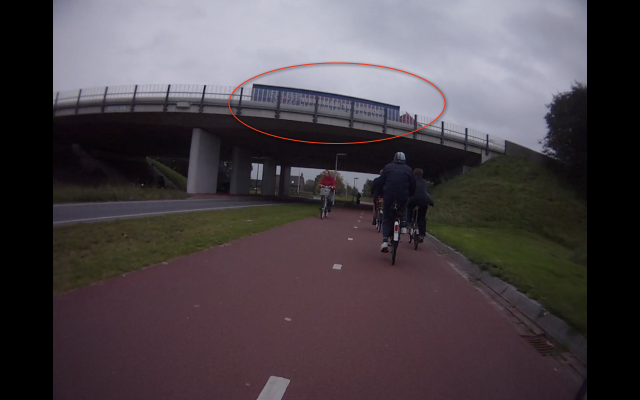 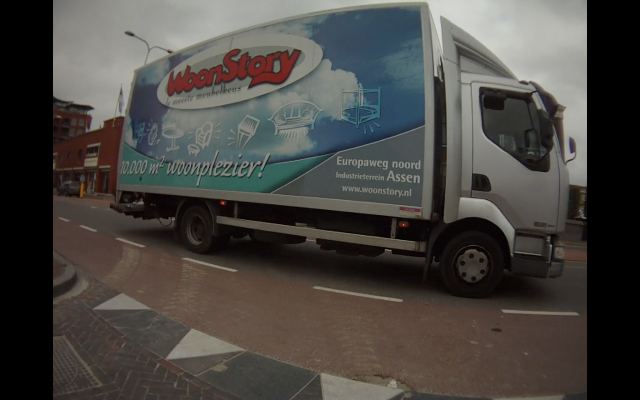 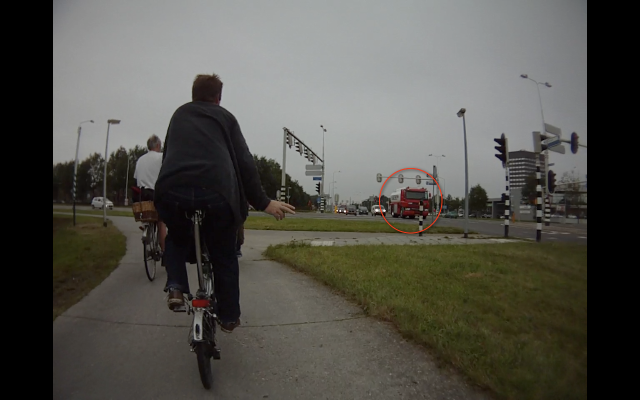 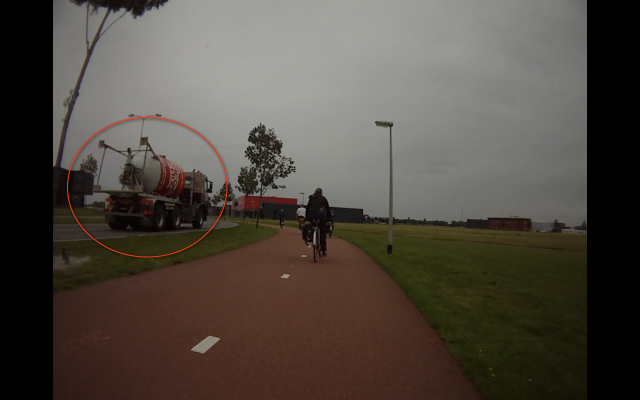 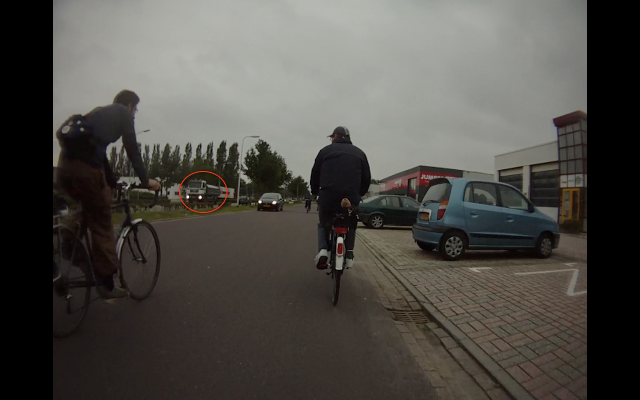 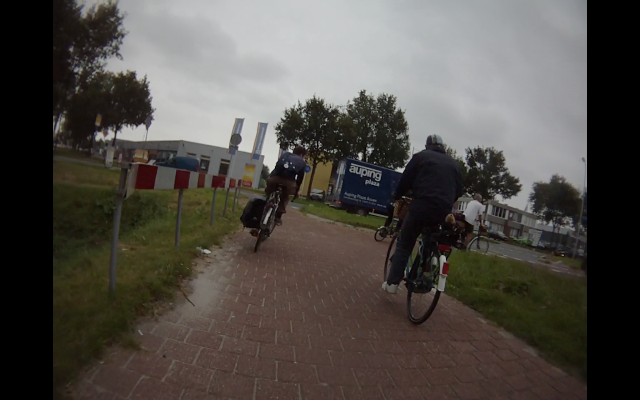 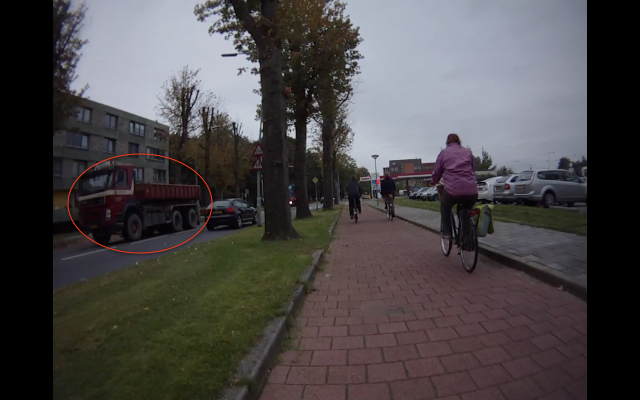 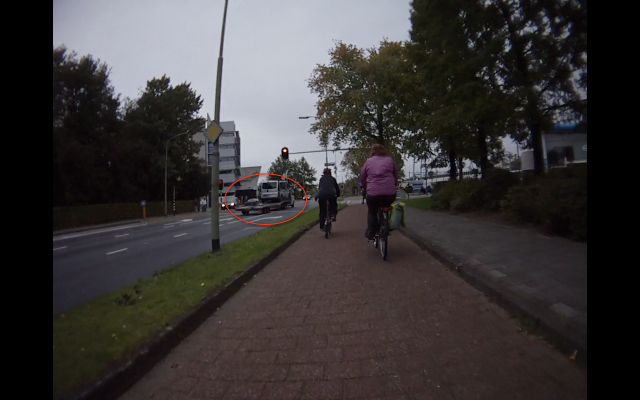 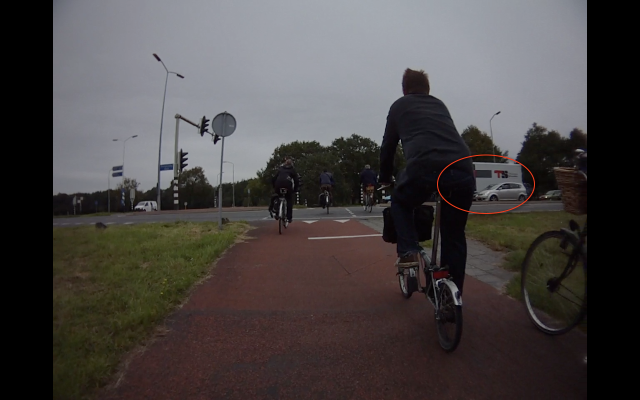 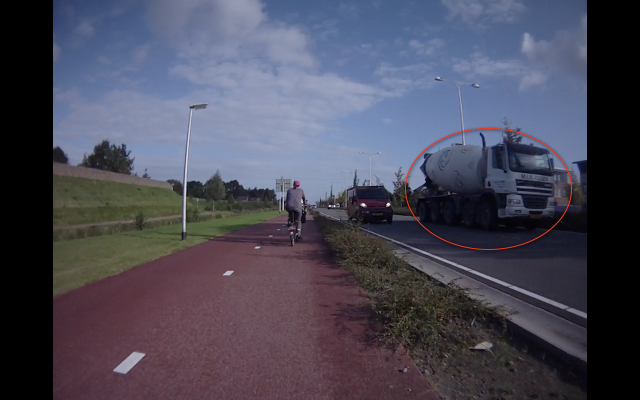 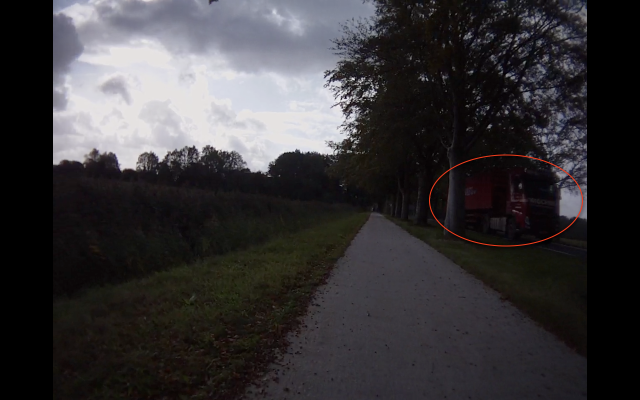 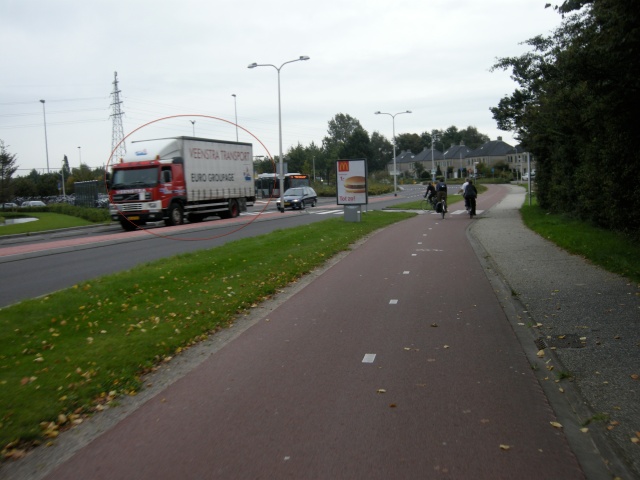 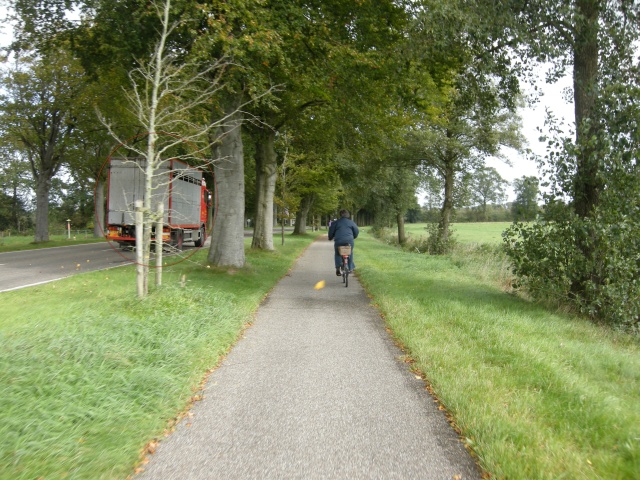 In nearly every single instance of a lorry being spotted, I was cycling on separated infrastructure. This is not a coincidence; separated infrastructure is almost always provided on roads that lorries use regularly. The only example of a more ‘direct’ interaction with a lorry is in the third photograph, where the lorry was travelling along this road –

while I waited to cross from the left, by the building with the scaffolding – emerging from a ‘bicycle road’ to head across into a vehicle-restricted area.

To be clear, we did not spend our entire trip cycling on cycle paths – we used all kinds of streets and roads, visiting city centres, hospitals, industrial estates, schools, housing estates, woonerfs, and shopping centres. We did not manage to avoid lorries by sticking completely to cycle paths.

Crucially, those streets we used that did not have separated infrastructure, like these – 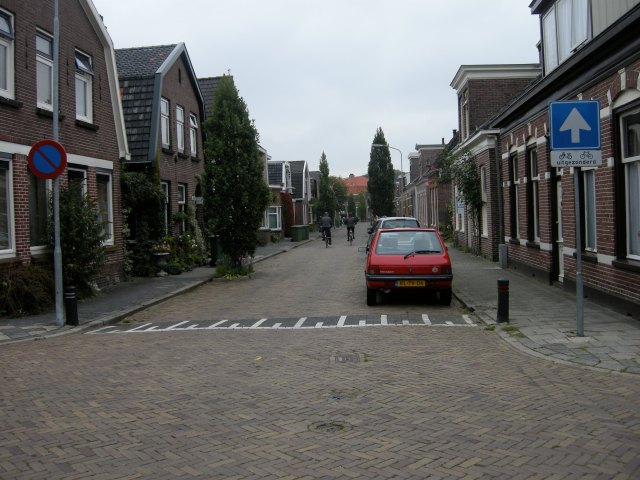 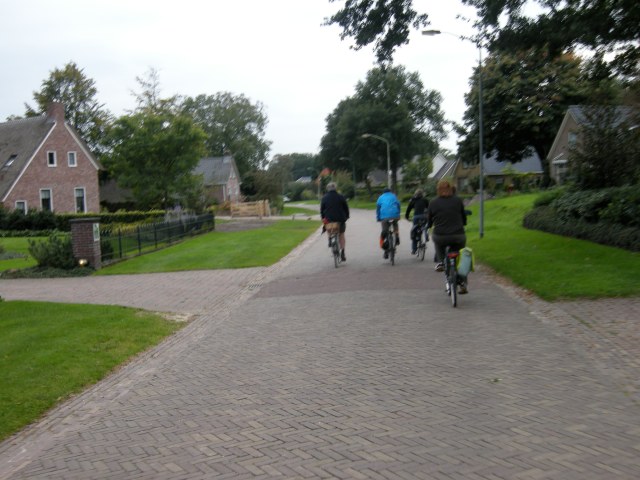 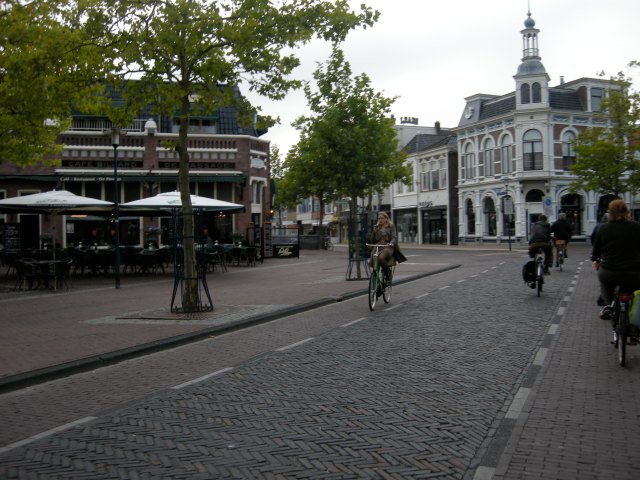 are unattractive or impossible to use as through-routes (except on foot, or bike, of course). If we had encountered a lorry in these places, it would only be because it was accessing a property on one of these streets, not because it was on its way to somewhere else.

On those routes that lorries do use – and where we did encounter them – cyclists are separated, either spatially or temporally. You can see the evidence of this in my photographs.

Cyclists do not ‘surround’ lorries in the Netherlands – quite the opposite. They are kept almost entirely apart. That might explain why Dutch cycling casualties are so low.

12 Responses to Mixing with lorries, Dutch-style