An update comes from Diamond Geezer on the state of the improvements at Bow roundabout. Both he and I pointed out last week that the purposes of the traffic lights – the plethora of traffic lights – are poorly understood by motorists and cyclists alike, largely because they are all identical in appearance, and it’s not particularly clear what purpose each set serves.

A sensible design would involve more separation for bicycles, not just a reintroduction of them into the road a second ahead of motor vehicles. This would mean separation of turning phases, with cyclists kept segregated right up to the entrance to the roundabout. The lights could then be positioned in a way that would remove all this ambiguity (although it does not help that TfL do not have a bicycle-specific design at their disposal, only the standard issue which has a light shaped like a bicycle for the amber and green phases – this may change). Cyclists would be held at a red light, which would quite obviously be for them, while left-turning vehicles moved perpendicular to them onto the A12.

However, TfL’s only ‘solution’ to the problems witnessed already is, as Diamond Geezer has written, is the addition of yet more signs telling cyclists to obey red lights. His picture – 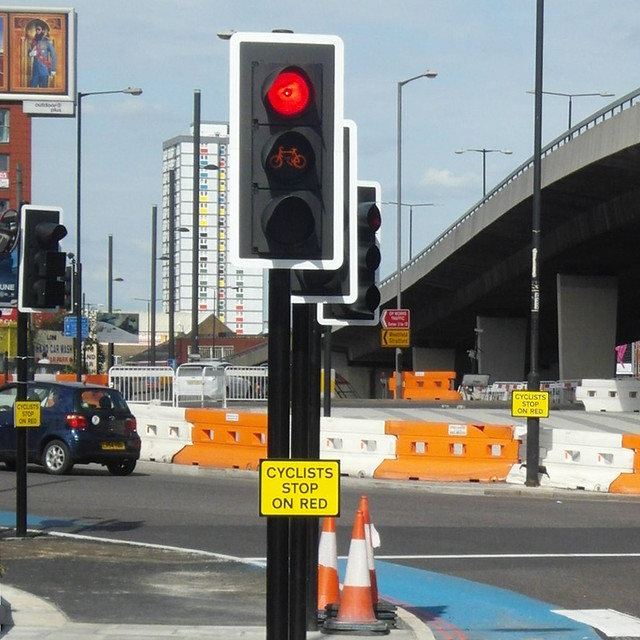 The assumption here, on TfL’s part, is that cyclists are moving through the red lights because they are naughty. I don’t think that’s necessarily true; the more likely explanation is that they are confused, just like the motorists who were stopping in all the wrong places and going at all the wrong lights just as often as the cyclists (however, there don’t appear to be any signs telling motorists to ‘stop on red’, despite their red light jumping being just as prevalent while I was observing the junction).

The junction just doesn’t make sense. Some silly small yellow signs are not really the right way to address the problem.

Nevertheless the addition of these signs has prompted some of Diamond Geezer’s commenters to voice their opinion that  the issue is the congenital law-breaking of cyclists (ignoring, of course, the fact that the police officers I was with at the junction simply did not have the time to deal with all the offences being committed by drivers passing them, be it no seat belts, fiddling with phones, talking on phones, jumping the lights, motorcycles driving in the segregated cycle lane, and so on).

Comments on the Diamond Geezer article include

why would one expect cyclists to stop on red just because three signs tell them to. Why would the assumption that no rule of the road applies to them be any different at Bow.

If a cyclist were clued up on his/her highway code they would probably understand this. But since there is no legal requirement for cyclists to even take a cursory glance at said document, I can see why they would be confused.

the people on the bikes have been their own worst enemy for years (decades). The number of times you see cyclists simply ignoring traffic laws, signals, and markings is probably greater than the number of them you see actually obeying the rules.

All the extra measures for cyclists are a waste of time if cyclists ignore them because it doesn’t suit them to comply or they make an arbitrary judgement that it’s ‘safe’ for them to ignore road rules and traffic signals.

In other words, the predictable comments about cyclists not being familiar with the Highway Code and hence not knowing rules, or simply choosing to ignore rules that don’t suit them.

Here’s a selection of rules from the Highway Code; ones that apply to motorists.

Rule 93 Slow down, and if necessary stop, if you are dazzled by bright sunlight.

An interesting rule, in the light of a recent spate of drivers killing cyclists by driving into them from behind while apparently unable to see what is in front of them due to ‘bright sun’.

Slow down or stop? What’s that?

Rule 103 Signals warn and inform other road users, including pedestrians (see ‘Signals to other road users’), of your intended actions. You should always use them to advise other road users before changing course or direction, stopping or moving off… Remember that signalling does not give you priority.

Rule 112 The horn. Use only while your vehicle is moving and you need to warn other road users of your presence. Never sound your horn aggressively.

Oh really? I thought it was an annoyance-signalling device!

Rule 116 Hazard warning lights. These may be used when your vehicle is stationary, to warn that it is temporarily obstructing traffic. Never use them as an excuse for dangerous or illegal parking.

Wrong. Hazard lights are an ‘exemption’ light that allow you to park anywhere you like.

Rule 124 You MUST NOT exceed the maximum speed limits for the road and for your vehicle.

Rule 125 The speed limit is the absolute maximum and does not mean it is safe to drive at that speed irrespective of conditions. Driving at speeds too fast for the road and traffic conditions is dangerous. You should always reduce your speed when sharing the road with pedestrians, cyclists and horse riders.

Rule 126 Drive at a speed that will allow you to stop well within the distance you can see to be clear.

No, you should always drive at or close the speed limit, and if something ‘suddenly’ appears in front of you around a sharp corner, that’s that person’s problem, not yours.

Rule 129 Double white lines where the line nearest you is solid. This means you MUST NOT cross or straddle it unless it is safe and you need to enter adjoining premises or a side road. You may cross the line if necessary, provided the road is clear, to pass a stationary vehicle, or overtake a pedal cycle, horse or road maintenance vehicle, if they are travelling at 10 mph (16 km/h) or less.

I thought those dashed lines indicated a smaller parking bay! Who knew!

Rule 145 You MUST NOT drive on or over a pavement, footpath or bridleway except to gain lawful access to property, or in the case of an emergency.

Rule 147 Be considerate. Be careful of and considerate towards all types of road users, especially those requiring extra care. You should try to be understanding if other road users cause problems; they may be inexperienced or not know the area well.

Considerate? But I’m in a hurry! For no apparent reason!

Rule 152 Residential streets. You should drive slowly and carefully on streets where there are likely to be pedestrians, cyclists and parked cars.

Rule 153 Traffic-calming measures. On some roads there are features such as road humps, chicanes and narrowings which are intended to slow you down. When you approach these features reduce your speed. Allow cyclists and motorcyclists room to pass through them. Maintain a reduced speed along the whole of the stretch of road within the calming measures.

What!? But that will slow me down! Surely the idea is to speed up between the calming measures so you don’t lose any time at all?

Rule 163 Overtake only when it is safe and legal to do so. You should not assume that you can simply follow a vehicle ahead which is overtaking; there may only be enough room for one vehicle. [Also] give motorcyclists, cyclists and horse riders at least as much room as you  would when overtaking a car

Rule 166 DO NOT overtake if there is any doubt, or where you cannot see far enough ahead to be sure it is safe.

Go for it, I say. What are the chances that something’s coming the other way? Minimal. It’ll be fine.

Rule 170 Take extra care at junctions. You should watch out for pedestrians crossing a road into which you are turning. If they have started to cross they have priority, so give way.

They have priority? But they’re in the road!

Rule 178 Advanced stop lines. Some signal-controlled junctions have advanced stop lines to allow cycles to be positioned ahead of other traffic. Motorists, including motorcyclists, MUST stop at the first white line reached if the lights are amber or red.

Wrong. The ASL is just an extra ‘slowing down’ area.

Rule 182 Turning left. Do not overtake just before you turn left.

Except if you’re overtaking a bicycle. Then it’s fine.

And some rules on parking –

Rule 238 Double yellow lines indicate a prohibition of waiting at any time even if there are no upright signs.

Rule 243 DO NOT stop or park opposite or within 10 metres (32 feet) of a junction, except in an authorised parking space

Rule 244 You MUST NOT park partially or wholly on the pavement in London, and should not do so elsewhere unless signs permit it.

Motorists have been made to read the Highway Code – flicking idly through it when they were a teenager – so all these rules, and others in the Code, are obviously met with perfect compliance. Except when they are not obeyed, but that’s because those rules are silly and pointless and nobody obeys them anyway. Or because the motorists are confused, like at Bow roundabout.

4 Responses to The Highway Code