‘Localism’ – terrible for the design of cycling and walking infrastructure if councils don’t know what they’re doing, or don’t care

People tend to get quite upset about green field development; countryside is more aesthetically pleasing than the forms of suburban sprawl that tend to replace it.

I’m not so sniffy about it, provided it is done properly. Urban forms can be as attractive, quiet and pleasant as the countryside. The problem we have in Britain is that our development is usually done badly; ugly, or at best generic, buildings, little local amenity, poor transport infrastructure that generally revolves around the private motor vehicle, which in turn creates an ugly streetscape, noise and pollution, and a lack of social and objective safety.

I’m reserving judgement on how this new development in Horsham is going to progress (the broad plans do not fill me with much confidence), but the early signs are far from good. The first stage of the development, entitled ‘Highwood Village’ (a strange choice of title, being nothing like a village) is virtually complete. It is the section that lies to the south of Tanbridge House School.

The new entrance to the development, from Hills Farm Lane in Horsham.

Immediately we can see that the pavement just stops at the junction; there is no continuity across it. Instead pedestrians have to cross, and then cross back, all because of a slightly absurd sliproad-style turning onto Hills Farm Lane. The junction mouth is vast. This is surely not an appropriate junction design for a residential road meeting another residential road. Anyone with push chairs or a wheelchair cannot get across the junction on the right hand side here – there are no dropped kerbs on the far side.

The pedestrian refuge for crossing the ‘main road’ of Hills Farm Lane here has been left in place. An attractive design feature for cycling. Note that there is a new bus stop in the background, hard to get to if you are walking along the right hand side of the road, thanks to the new junction.

Now into the development itself.

Here’s the ‘official’ dropped-kerb crossing point for the junction mouth, some thirty yards away from the actual junction (to the left of the photo). Convenient for pedestrians.

The first houses in the development, as you come across the bridge over the river. 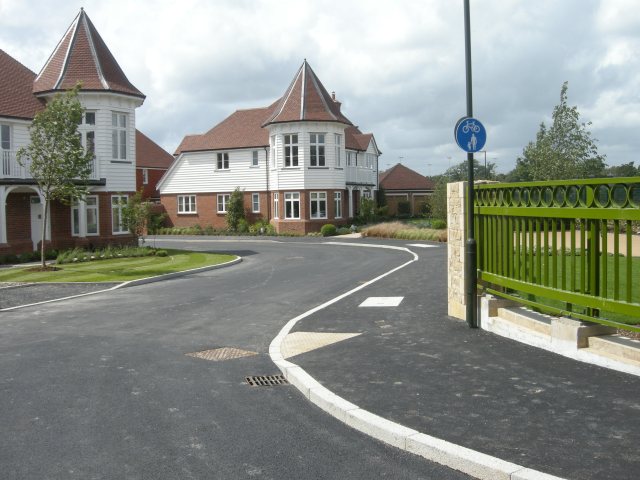 Notice that there is some excellent provision for cycling here, by way of a shared use pavement. Of course, by ‘provision’, I mean that someone has put a blue roundel on a lampost, and by ‘shared use pavement’ I mean an ordinary pavement, indistinguishable from that designed for pedestrians, on which someone has decided it is acceptable for people to cycle. This particular spot – the end of the bridge – is a fantastic blind corner.

In addition to being just about the lowest form of ‘designing’ for cycling, to add insult to injury, it’s completely misguided. There shouldn’t be any need for cyclists to be pushed onto the pavements here. This is a residential road, and as such, should have a low speed limit and design features to calm it and make it subjectively safe for cycling – and indeed for the residents who might wish to let their children play in the street. Frankly this is just hopeless, awful stuff.

In any case, the ‘shared use’ pavement quickly comes to an end a few yards down the road. What was the point?

Now onto a design feature that had me hopping from foot to foot with incredulity. As already mentioned, this development lies just to the south of Tanbridge House School, the largest secondary school in Horsham District. Perfect! Your child can walk out of the front door here, and be at the school in just a short, hop skip and jump.

Except, no, they can’t, because this new development has been fenced off from the new path – built at the same time – that leads directly to the school.

There’s the school in the background, and there, in the foreground – separating this small car park from the path behind – is some planting and a wooden fence.

The route you have to take is therefore circuitous, heading off in the opposite direction, before joining the new shared use cycle path, that starts back out near the junction entrance to this housing development. 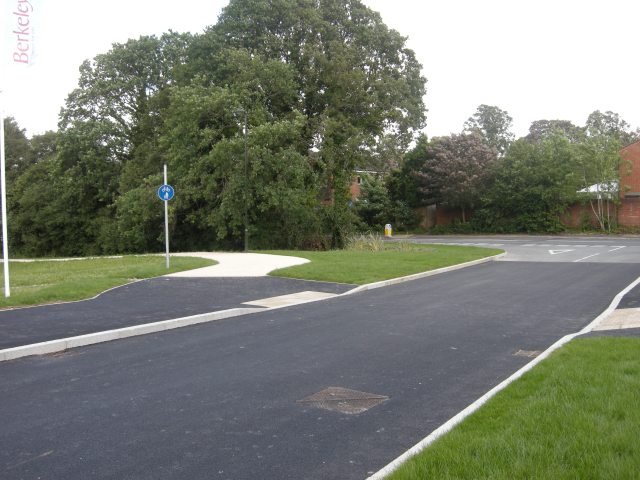 I got a little excited when I saw this path under construction, cycling past a month or so ago, and to be fair, the quality is reasonably good. The surface is smooth, it’s much wider than your usual shared path, and it goes somewhere. Sort of.

On the negative side, it’s already overgrown, despite only being open a week. Not a good start. 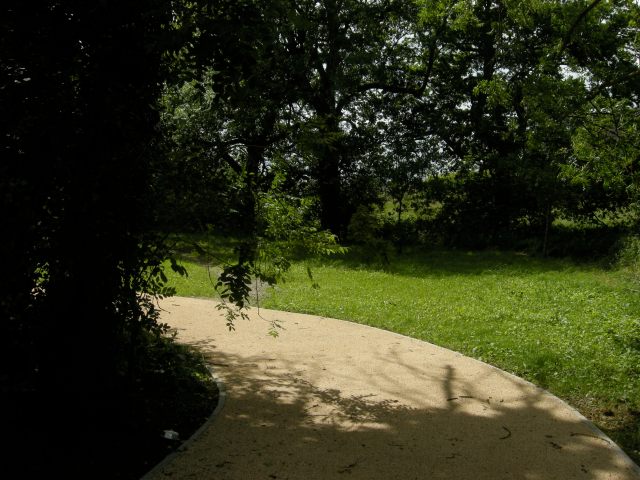 It’s needlessly wibbly-wobbly (you wouldn’t think that you could actually build a cycle path in a straight line).

Oh, and when it meets the road again, there’s no dropped kerb.

Can you imagine a road meeting another road with this kind of arrangement? Would the driver of a motor vehicle have to bump his car down over a kerb simply to join another road?

Maddeningly, the pre-existing shared pavement hasn’t been remedied at all. A short stub of it still exists, with a dropped kerb a few yards back in the direction you’ve come from. 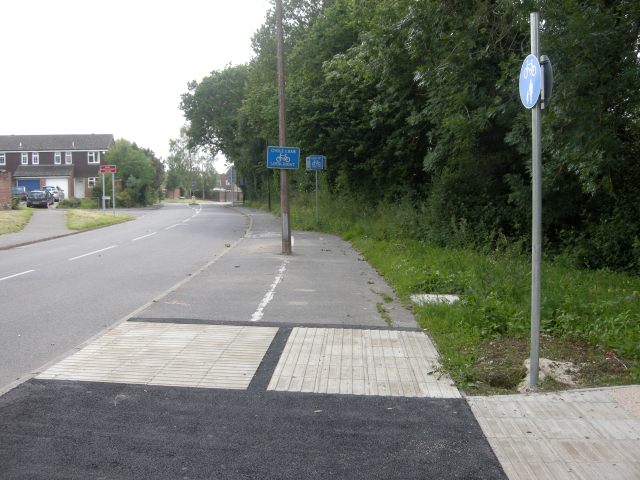 This hints at the final, most serious problem with this path. It’s a short little stub, running parallel to a road which should itself be made safe, pleasant and convenient for cycling and walking; Hills Farm Lane. You can see the arrangement in the video below, as I cycle on the road, instead of taking the path.

Hills Farm Lane is (or should be) a minor distributor road, servicing the ten or so cul-de-sacs along it. As it stands, it’s a bit of a rat run, a useful short cut for people who wish to avoid traffic lights in the centre of town when heading west. It needs a lower speed limit, and design features to keep those speeds low. Ideally,  filtered permeability half-way along it would be appropriate, to ensure that the only people using this road are residents, not people speeding through on a short cut. If that can’t be achieved, then a cycle path should be built alongside it. Properly. There’s plenty of space; it’s flanked entirely by the green fields that are now being built on.

But no, if you are cycling along Hills Farm Lane, there is still nothing for you until you come to this development, where the new shared path starts some 30 yards into the turning, rather than along the road itself. Again –

If we are cycling along the main road, from the right, and we wish to divert onto the cycle path, look how far out of our way we have to come to join it.

In any case, the path comes to an end after about a hundred yards, joinig the pre-existing ‘shared use’ pavement conversion, which is rapidly disintegrating.

It’s just a complete muddle. No thought has gone into ameloriating the conditions for cycling, or for coming up with a useful route, or with how children might want to walk or cycle to their school, or with when and where shared pavements are appropriate.

Cycling has always been about ‘Localism’ and ‘Big Society’ with local campaigners and activists that have been bashing their heads against the wall of local democracy for years (and for free). This, for me is where the problem lies; it’s all well and good giving local authorities ‘the right tools’ with devolved powers, but what if they don’t know what to do with them (or don’t even want to know). It’s like giving a group of primary school children ‘the right tools’ to design Britain’s successor to Trident – many will be keen as mustard and will give it their best shot. The results they come up with, whilst thankfully not feasible, will be all the more wonderful as a result and fascinating.

That’s why children would know this. Because they walk and cycle about; at least, they do so far more than the planners and designers at my local council, who only seem able to design routes for motor vehicles, and for whom routes for walking and cycling seem at best to be an aesthetic afterthought.

So less ‘localism’ please, at least until we have worked out how to compel councils to even get the absolute basics right.

One thing I forgot to mention – and for which I am grateful to dasmirnov for pointing out in the comments – is that this whole area flooded last week, following the heavy rainfall. Do watch his video.

This has happened before, of course – the area is a floodplain for the River Arun, which I remember regularly spilling over its banks a few years ago, when I lived nearby. Now the area has been built on, and the fields replaced with a good deal of tarmac and hard standing, the problem will surely only get worse.

21 Responses to ‘Localism’ – terrible for the design of cycling and walking infrastructure if councils don’t know what they’re doing, or don’t care