Another visitor to the Netherlands gets it

An extract from Bella Bathurst’s excellent The Bicycle Book, which is well worth a read. Bella visits the Netherlands.

… on a sunny day in early July I head out of Amsterdam towards the north of the country. Assen is a medium-sized town in Drenthe with a broad, wide canal leading straight into the centre of town, a TT track and the same comfortable, well-proportioned red-brick architecture that all of Holland is made from. As in every Dutch railway station, Assen has a bike rental shop which will hire you something for as long as you need it. The resulting Gazelle is heavy and strong with three gears and two baskets. Once it’s in motion, it has roughly the same momentum and stopping distance as a medium-sized oil tanker. I set off northwards along the canal towpath past the lines of trees and barges spaced at regulation intervals and then up onto the main road out of town.

But that road does not look like it would look in Britain. In Britain, roads are solely and exclusively for cars. Out in the country they sometimes have short stretches of pavement, but more usually it’s all just tarmac and road kill. Here, they have a much more elegant solution. First there’s a pavement, then a cycle path, then there are trees, then there’s a road. And the same on the other side. It all somehow fits in not because the buildings are any wider apart, but because the roads are thinner. And because there are paths specially for bikes already there, all sorts of things start to happen. The assumptions that one makes in Britain no longer apply; the whole way one cycles is suddenly called into question. Springing from the Dutch belief that cyclists have a legal and moral right to exist comes a whole series of equally bizarre notions: that you don’t have to cycle defensively, that you are not just about to get wiped out by an HGV, that you do not have anything to fear. The UK has eight casualties per 100km [sic] cycled; the Netherlands has 0.8. And since you don’t have anything to fear, you don’t have anything to prove. If you don’t have anything to prove, you don’t have to compete, either with motorists or with your fellow cyclists. Here, people cycle because they’re interested in reaching their destinations. Everyone spins along at roughly the same pace – a steady, comfortable 20 to 25 kph. Everyone rides as upright as if they were sitting at the kitchen table back at home, and everyone looks perfectly capable of pedalling halfway to Brussels if necessary. No one shows off or rides anything flashy or bangs on the bonnets of transgressing vans. It is all very strange.

I may be mistaken, but judging by her description, Bella was not heading north, but west, beside that ‘broad, wide canal’ – the Vaart. 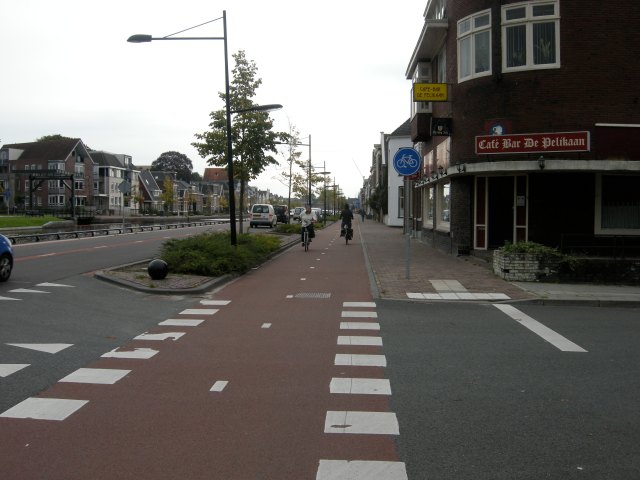 ‘A pavement, then a cycle path, then there are trees, then there’s a road. ‘ You can cycle on the path with an umbrella, quite happily.

The road itself is thin – the carriageways, unlike in the UK, are just about wide enough to accommodate a lorry, and no more.

There is no space between the carriageways, either. Motor vehicles pass close to each other. The street space, as Bathurst says, is just used in a different way – ‘it all somehow fits in not because the buildings are any wider apart, but because the roads are thinner.’

Cycling in Assen is completely different from cycling in the United Kingdom. It is entirely relaxed. There is no need for defensive or assertive cycling. The description Bella Bathurst gives is accurate – there is no fear. Consequently people of all ages, genders and abilities cycle at their own pace, and in their own clothes. It’s as natural and easy as walking. 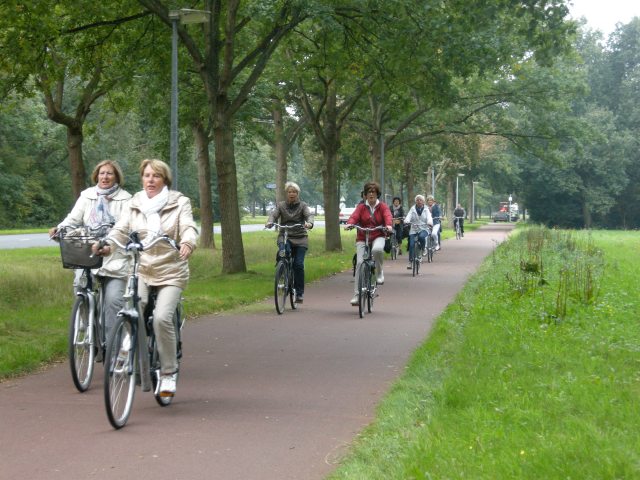 Bathurst goes on to write that, in the Netherlands, cycling

isn’t a poor man’s form of transport, it isn’t a rich man’s hobby, it’s not a child’s toy or a machine for proving one’s virility. It just isn’t an issue. The main English-language bookshop in Amsterdam has three floors of books, and a transport section full of material on cars, trains, Spitfires and Fokkers, but not a single line on cycling – not route guide, not a map, not even something on mending a puncture. Cycling here is so ubiquitous it’s a non-issue. It doesn’t belong to anyone, so it belongs to everyone. It’s just a bicycle – as universal, unexciting and miraculous as a pair of legs.

Despite the decades-long proven track record of the Netherlands in demonstrating precisely how you make cycling available to all as an obvious and easy transport choice, a curious amount of effort seems to be expended in Great Britain dismissing that very same approach of the Netherlands, and instead attempting to persuade those who currently don’t cycle – including people of the same age and gender as those in the picture above – that cycling in the road, amongst and alongside buses, vans and HGVs, is something they might actually want to do. An approach that has a consistent track record of failure, principally because people already know that they don’t want to cycle alongside buses, vans and HGVs. Glossy advertising and promotional material, persuasion and marketing, is not going to address this simple fact.

This entry was posted in Promotion, Subjective safety, The Netherlands, Uncategorized. Bookmark the permalink.

8 Responses to Another visitor to the Netherlands gets it