‘Why should cyclists all of a sudden get investment ahead of motorists?’

The slight absence of blog posts over the last week or so has been due to the fact I was on holiday with friends and family in north Devon.

It’s a very hilly area, and the main roads, which tend to avoid the hills, are rather fast and busy, so the opportunities for leisure cycling for the less experience members of our party was somewhat limited – with the exception of the brilliant Tarka Trail.

This is a long network of off-carriageway cycling in north Devon that takes in some stunning scenery. It’s a figure of eight route, which tells you that this is primarily a leisure route, rather than one for transport. Mostly, however, it is of a very high quality – at least by British standards. In fact the quality of the trail is so good that it has actually been ‘streetviewed’ – in 2010 Google piloted a trike along the length of the path, mapping it for Streetview. That means you can explore it (virtually) for yourself.

The quality of the section between Barnstaple and Bideford – one of the more useful ‘transport’ sections – is largely a function of the fact that the trail runs directly along the route of the former Barnstaple to Bideford railway line, a service which ceased in 1965 with the Beeching Axe. Only one line remains at Barnstaple, a sad contrast with the busy junction it used to be.

The route to Bideford has, however, been preserved without obstruction or development; indeed preserved to such an extent that there are increasing calls to reopen the railway (a new roundabout near Barnstaple station, finished in 2007, was built over the line, not on it, in anticipation of potential reopening). Although a model railway track has been built along this ten mile stretch of line, a suggested cost of £80 million to reopen it appears to be too much for Devon County Council. A pity, as the line could run alongside the existing path for walkers and cyclists, who should, in any case, have roads that are pleasant and safe to use, as well as leisure routes.

Which brings me to the problem of crossing the Torridge estuary. If you wish to continue your journey west along the coast from Barnstaple – perhaps to visit the beaches of Westward Ho! and Appledore – you are presented with a bit of difficulty.

You either follow the Tarka trail right along the estuary into Bideford itself, crossing the river on the ancient bridge in the town centre before heading back north through the town, or you venture across the ‘new’ Torridge Bridge, which carries the A39. The quieter route, marked in green on the above map from Cyclestreets, is clearly substantially longer than the red and amber routes, which involve cycling on the main road over the bridge – about two miles longer. That’s quite a lot of extra exertion, if you don’t fancy riding on the new bridge, which – while offering you spectacular views down towards Bideford and its bridge – is not exactly a place for the faint-hearted.

A fast speed limit, and no cycle lanes (the white paint is only a border marking, and does not denote any kind of provision, which would be substandard in any case) meant that the few cyclists we saw on the bridge were, somewhat understandably, using the footpath.

This new bridge was built completed in 1987, and is actually rather beautiful, in a stark, simplistic kind of way. 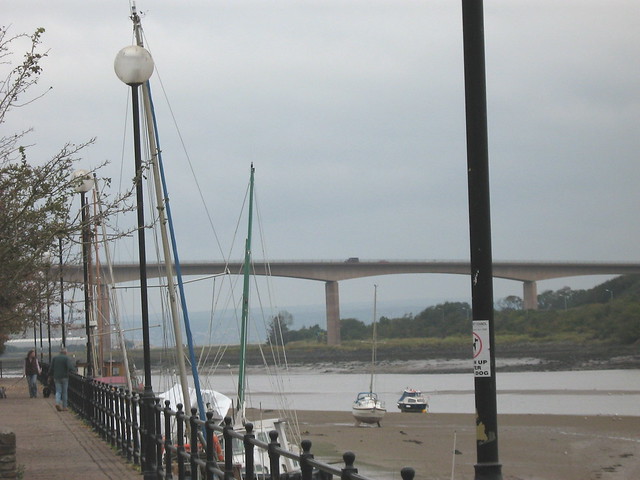 Unfortunately, while beautiful, the bridge is emblematic of the way new road infrastructure was built in Britain, namely without any thought or consideration for how a person on a bicycle might try and use it. There is no way the vast majority of people would ever consider cycling in the carriageway of a 60mph road, with lorries thundering by, on an exposed bridge.

This kind of oversight was perhaps understandable in the 60s, 70s and 80s, when cycling probably wasn’t on the radar at all for any transport planner. Take a look at any local transport plan from this era, and you will find that the bicycle usually isn’t even mentioned. The bicycle wasn’t considered a mode of transport any more; only something that eccentrics might continue to use, and others might use for sport, but not much beyond that. Who cared if the bridge was unsuitable for an elderly lady, or a child, to use by bike? Everyone had cars, or they would have them in the near future.

A few days ago, I was in discussion on Twitter with a council media officer, who maintained (amongst other things) that

Every single authority in the land is bending over backwards for cyclists right now. It will never be enough.

Why should cyclists all of a sudden get investment ahead of motorists?

I don’t think anyone is arguing that cyclists should get investment ‘ahead’ of motorists; just that the transport budget pie is currently divided incredibly unequally, even on the current numbers of trips being made by bicycle, let alone if we are seriously considering a major shift towards the bicycle as a mode of transport. But an answer, of sorts, to the question posed lies in bridges like the one across the Torridge. Costing millions, and designed exclusively for motoring, it’s typical of our existing road infrastructure, which has consistently excluded people on bicycles from useful routes. Motoring has been ‘invested’ in for decades to an extraordinary extent, while cycling has been ignored.

If ‘every single authority in the land’ is ‘bending over backwards’ for cycling, I’d like to see some reallocation of the space on that bridge. Get rid of the central hatching. Create a wide, kerb-separated cycle track on both sides, on which pedestrians can walk. Don’t make less confident cyclists take a 2 mile diversion.

Instead of claiming that cyclists will never be satisfied, or that can we at least start making our main roads available as routes for cycling? It’s not too much to ask.

5 Responses to ‘Why should cyclists all of a sudden get investment ahead of motorists?’