Posted on August 8, 2012 by aseasyasriding

In the UK, the bike shown in the picture above is seen as a ladies’ bike; it has a step-through frame, which is (stereotypically) assumed to accommodate a long, flowing skirt. Even some of my more enlightened bike-riding compatriots have disparagingly referred to my Omafiets as a ‘girls bike’.

But the idea that the absence of a top tube is for skirt-wearers is a bit of a myth. The addition of a top tube to a bicycle is for strength. If the bike is strong enough, then there is no need for a top tube, and the bicycle is easier to mount and dismount. Dutch bikes like this Omafiets are strong, with no need for top tubes, and you can hop on and off them much more easily than a ‘standard’ triangular frame. That means they are ridden quite commonly by males, as well as by females.

Dutch schoolboys on omafietsen in Utrecht 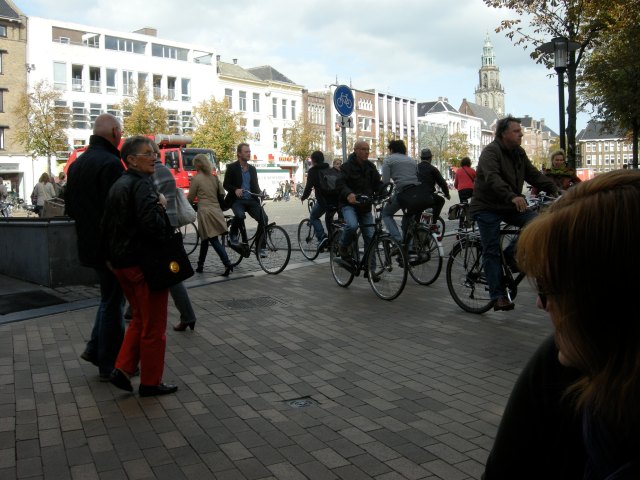 Men on a variety of bikes in Groningen

One particular advantage of a bike without a top tube is that the transition between walking and cycling – and vice versa – is very quick and easy. You just step from the bike, instead of having to swing your leg over the rear wheel. Never having ridden a bike like this before, this came as a bit of a revelation. It’s so much simpler to start and stop riding.

In fact, simplicity is the essence of this bike. Everything about it is designed to make cycling as painless – both literally and metaphorically – as possible.

The riding position is gloriously upright and comfortable; it’s like walking, your legs making slow circles, but of course travelling much faster. The timeless design is a consequence of the Victorians working out precisely the best way to convey oneself is a stately fashion. It hasn’t been bettered; that’s why the Dutch still ride bikes with this kind of geometry for their everyday cycling.

Ironically, the design of this bike, so traditionally ‘Dutch’, is actually… British.

The Dutch cycle industry grew rapidly from the 1890s onwards. Since by then it was the British who had the strongest and best-developed market in bike design, Dutch framemakers either copied them or imported them from England. In 1895, 85 per cent of all bikes bought in the Netherlands were from Britain; the vestiges of that influence can still be seen in the solid, gentlemanly shape of a traditional Dutch bike even now.

From ‘The Bicycle Book’ by Bella Bathurst

Unlike in the Netherlands, where everyday cycling survived largely intact during the twentieth century, bicycles essentially disappeared from Britain as a mode of transport. The only bicycles left were ridden by the faster and sportier, and as these riders preferred a bicycle that allowed greater speed, that became the British bicycle of choice. It is only recently that ‘upright’, relaxed bicycles have become available again on the British high street, despite the British largely being responsible for its design and evolution.

The Omafiets is not a nimble bike. You will not be able to accelerate away from the lights, nor will you be able to go fast up hills, or to swerve around corners; that’s not what it is for. It is for cruising along. Indeed, the experience of riding a bike like this is most analogous to riding a large American classic car, being big, heavy, and with plenty of vehicle out in front of you. 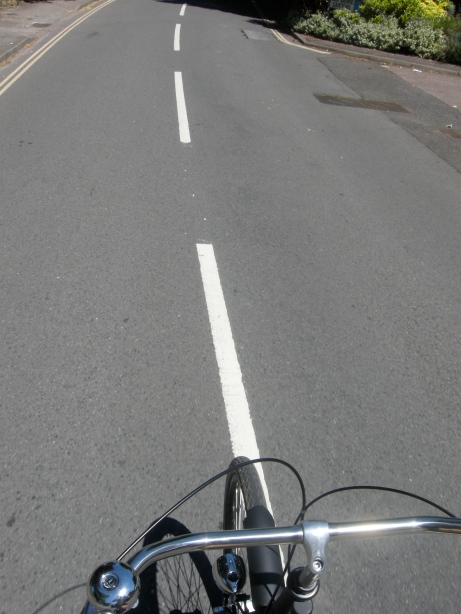 The view from the cockpit

It took some adjustment to having around five feet of bicycle out ahead of me, being used, ordinarily, to hunching over the handlebars, my head approximately over the front wheel. But it became natural very quickly. The steering, with the handlebars sloping back towards you, is relaxed and easy – not at all twitchy.  It’s easier to interact with other people, too, whether they are in cars, or on foot. You’re meeting them face to face. And the higher position is great for better visibility (you can look over the tops of cars, for instance, even larger ones), and for being seen.

The omafiets is simple to use, too. I’ve had it for about six months, and ridden it in some fairly atrocious British ‘summer’ weather, and beyond pumping up the tyres a couple of times, and a slight adjustment of the gear cable, I haven’t performed any maintenance, at all. The chain is completely concealed – 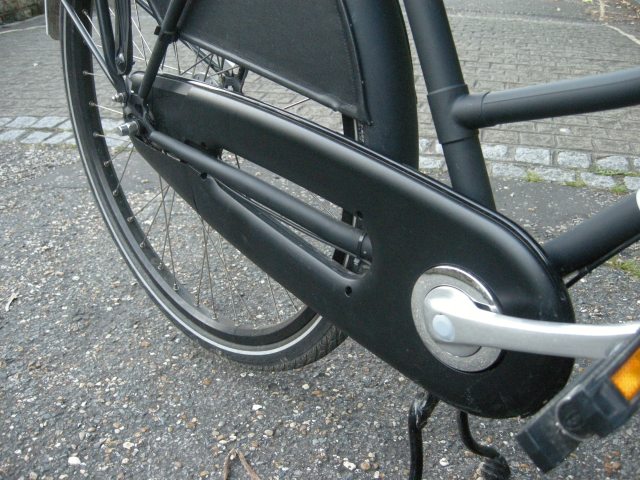 which means that your clothes stay grease-free (no need to tuck your trousers away) and also that the elements are kept away from the chain.

I have eight gears, controlled by a simple twist grip on the right –

which changes the hub gear. 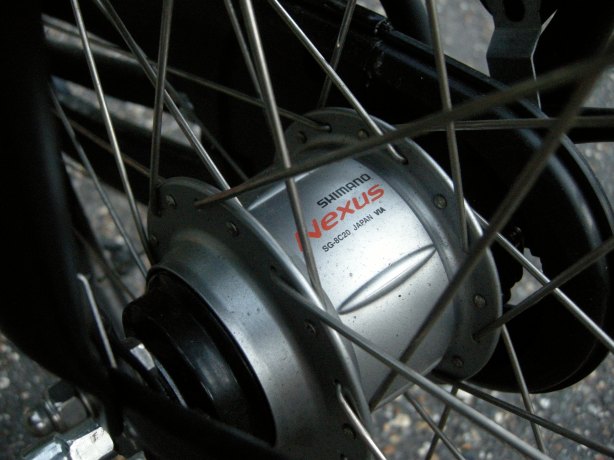 No working parts exposed to the elements, so (hopefully) very little maintenance required. Top speed in 8th gear is about 15-20 mph, while first gear is definitely for trundling. Despite the massive weight of the Omafiets (probably around 25 kg, at a guess) you can get up steep hills on this bike; you just do it slowly. Gear down, and go at a speed you are comfortable with. That’s it.

The weight is indicative of the bomb-proof nature of the bike. Everything is designed to be indestructible, and to last. The mudguards are seriously durable. 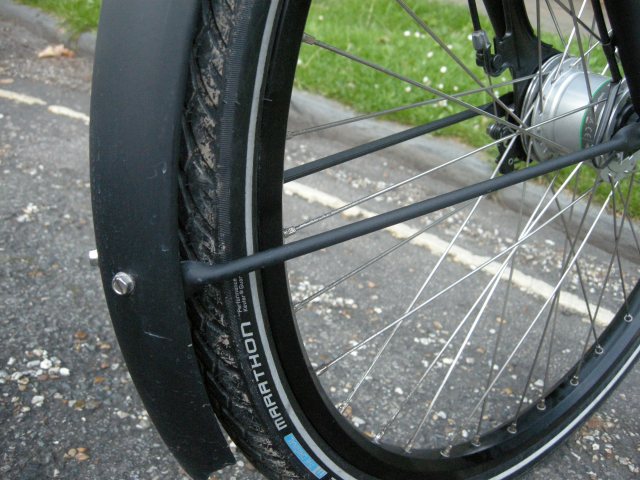 The tubing supports are nearly as big as the seatstays on a racing bike. At the rear, they carry the cabling for the rear light, and also double as a bumper.

The weight is a crucial advantage, in one important respect – you can park the bike up anywhere, without great risk of it being stolen.

Use the stable centre kickstand, and take out the key.

Just like a car, the bike can’t be ridden if the key isn’t in the ‘ignition’. Realistically, it can’t be carried away – I’m reasonably fit and strong, and struggle to lift it – so it is safe to leave it for short periods, depending on the area. While I definitely wouldn’t leave the bike overnight without locking it to something, shopping is definitely a doddle. Just roll up to the front door of the supermarket, and take the key out. 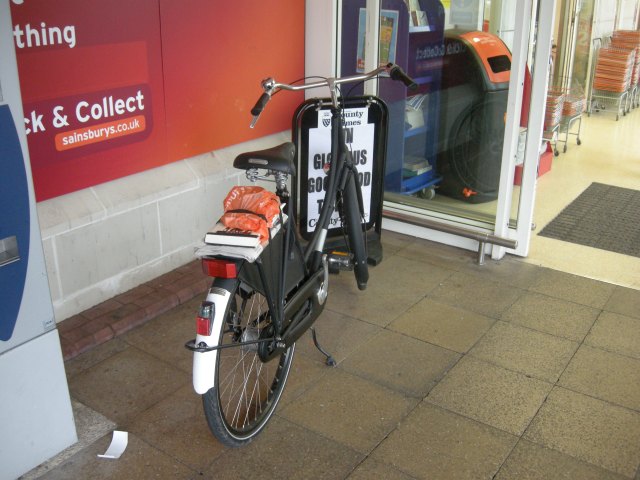 The full carrying capacity of the bike is huge. I’ve never used a shopping trolley to load up a bike before, nor have I made sure to park a bike by my front door for ease of unloading. The Clarijs panniers are massive.

Easily accommodating a fish & chip supper for four, in just one bag, with room to spare.

It’s really easy to add and remove the carrier – it simply slides in and out of tubes on the frame, an operation that takes seconds.

Even if you don’t have the panniers or the front rack fitted, you can still carry a good amount of stuff. The rear rack is a sturdy platform rated to carry 50 kg, and has handy straps that can hold beer –

Or a full petrol can –

Or whatever you fancy.

Ordinarily, I wouldn’t dream of dangling things from the handlebars, but the bike is so heavy and stable, it’s not a problem to hang a bag there. 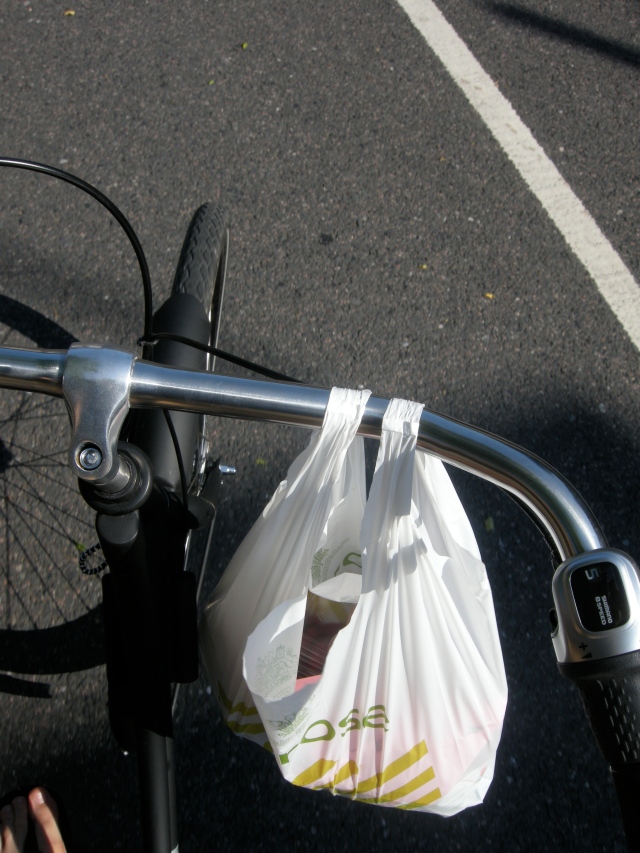 A spring steering stabiliser helps to keep the bike under control, when parked and when being ridden.

At the front, there’s a drum brake and dynamo hub, which powers both the front and rear lights. You really don’t notice whether it’s on or off.

The only modification I’ve made to the bike is to replace the original Busch & Muller front light with a model with a standlight; I didn’t feel particularly comfortable not having a front light while stationary. Probably acceptable on Dutch roads and cycle paths, not so safe here. My front light is now a Lumotec Classic, with standlight, and the bonus of old-fashioned looks.

The intensity dips slightly when the dynamo has stopped, but the light is still bright for around 4-5 minutes after stopping. It’s a great light.

The rear light has a standlight too, which lasts even longer. I never have to worry about charging up bike lights, or making sure lights are attached to the bike, or worrying about taking them off. The lights are part of the bike, and they will always work. Yet another way in which this bike is hassle-free.

Even without lights, the bike is highly visible, with reflective sidewalls on the tyres, and a double rear reflector (a reflector is also built into the front light). 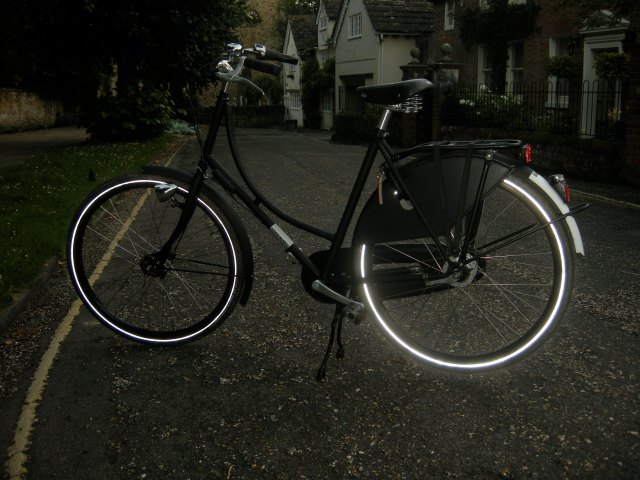 The final element is the rear coaster brake, contained in the rear hub, along with the eight gears. Apply backwards pressure to the pedals, and you slow down.

I had been rather nervous about it, but it is completely intuitive, just like using a brake pedal in a car. It’s much more effective than I had expected it to be; with your weight almost entirely over the rear wheel, you can bring yourself to a stop very quickly with just the coaster brake, bringing the weight of your body down on the pedal. The front brake, in my experience, is really there for a bit of ‘extra’ braking; it’s not as powerful as the coaster. The use of a coaster brake probably justifies a post of its own, but it really doesn’t take much getting used to. You just have to stop yourself from idly backpedaling as you cruise along; you will be braking! 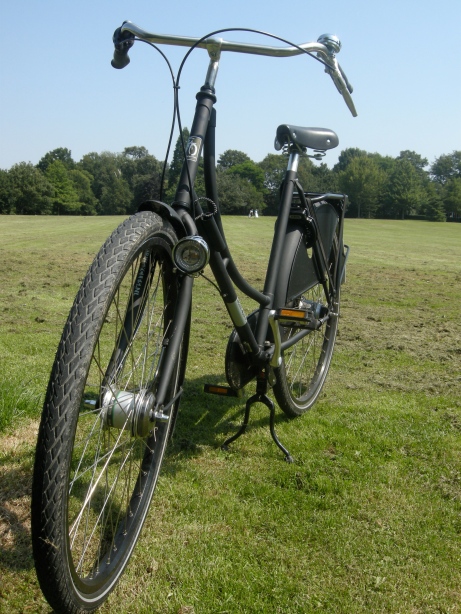 The Omafiets is not a bike for Olympians; it’s a bike for ‘ordinary’ people. While a pleasure to ride, it really brings home to me some of the difficulties a wider range of people might experience riding bikes in the UK. The slower speed you are inevitably forced to adopt makes the difficult right turns, big junctions and fast roundabouts that little bit more intimidating. The weight of the bike shows you how the elderly – and the less fit and able – might struggle to take their bikes onto a train. (There are only stairs at the eastern entrance of Horsham station, and I haven’t attempted to carry the Omafiets up them. I can think of several other stations in Sussex where I might struggle to get on the platform.) Likewise the size of the bike really emphasises just how badly some of our cycle infrastructure is designed and implemented; tight corners and fiddly gates become especially tight and fiddly on an Omafiets.

But all in all it’s been an absolute joy. Riding it is instinctive, comfortable and fun. So simple to use and look after, it’s what a bicycle as a mode of transport should look and feel like.