The civilising of Horsham town centre

Only two years ago, East Street in Horsham looked like this.

A narrow street, with large numbers of shops and restaurants, but designed principally around the motor vehicle. Despite the large numbers of pedestrians using the street, the pavements were narrow, with space assigned to parking bays and a (one-way) carriageway. A slightly dangerous cycle contraflow, separated only by a painted line, ran in the opposite direction. 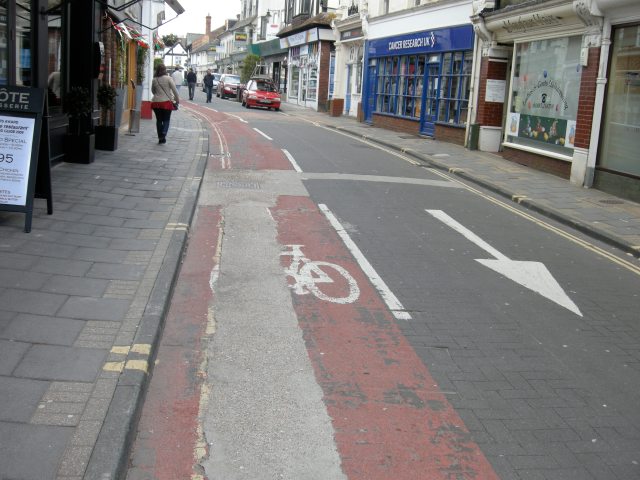 Shortly after this photograph was taken, the appearance of the street started to change dramatically. After consultation, the council had decided to implement a ‘shared space’; removal of the pavements and the tarmac ‘road’, to be replaced with a broad, uniform surface, and street furniture.

But it can, and does, work, in locations where the number of vehicle movements is (kept) low; even more so when the number of pedestrians is high. New Road in Brighton is a particularly good example; a carefully-designed one-way system means that the only vehicles driving on the road will be those accessing the street itself (and there is limited parking on it). Likewise Champion Square in Bristol is an excellent scheme, in large part due to the removal of through traffic, which again means that the only motor vehicles in the space will belong to residents.

The way the shared space on East Street was implemented is similar to New Road. Even before the street was converted, it was not useful as a through-route. The one-way system in Horsham town centre meant that, if you were to drive down East Street, you would only end up back where you started. Motor traffic volume was already low.

The council decided to go one step further, and effectively pedestrianise East Street, by only allowing access for the holders of disabled blue badges, who were permitted to park on the street, and vehicles loading and unloading. No other vehicle movements were allowed; bicycles could continue to use the street freely, in both directions. (Incidentally, Stuart Reid of MVA Consulting claimed, in January’s Street Talk, that there were ‘no access controls to this street’ (41:23) – which is, unfortunately, simply wrong. Only a strictly limited number and type of vehicles have access to this ‘Pedestrian Zone’.)

Restrictions on entry to East Street

These restrictions were sufficient to keep the numbers of motor vehicles on the street low, most of the time. Despite my initial scepticism (I had been concerned about how difficult it would be enforce the restrictions; not just stopping motor traffic passing through into the Carfax, but also establishing just who, and who wasn’t, ‘loading’), the street was a success. New restaurants have opened on it on a seemingly continuous basis, and the space is ‘owned’ by human beings, be they on foot, on skateboards and scooters, or on bikes.

But there were problems brewing (detailed in this previous post) – namely a difficulty in keeping some unauthorised traffic out; increasing damage to the street furniture; shoppers and street users voicing a preference for a traffic-free street; and the restaurants on the street wishing to use the space for outdoor dining.

On-street dining, during a rare closure in 2011. Not compatible with motor traffic

The council took these concerns on board, and in the summer of this year, the road has become closed to motor traffic between the hours of 10:30am and 4:30pm, by the simple addition of some temporary bollards at the entrance.

When the bollards are in, only pedestrians and those on bicycles can use the street.

Loading can still take place, of course, but only before 10:30 in the morning, and after 4:30 pm. Typically vans and lorries seem to opt for the morning slot; this coincides with a period when the street is fairly quiet, and seems to work quite well. 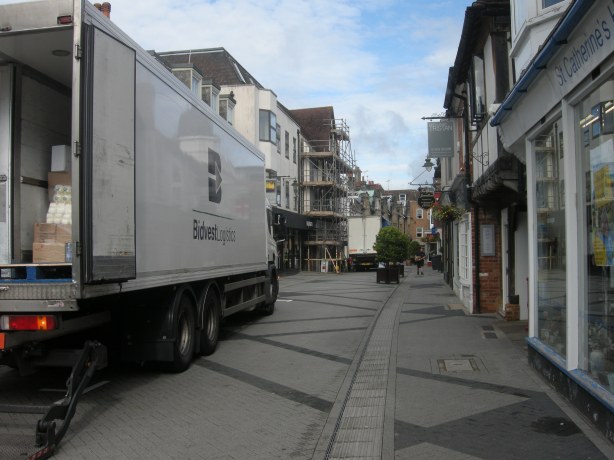 This is certainly an improvement on the old situation, when vans, cars and lorries clogged up the street at lunchtime, making the environment quite unpleasant for the pedestrians and cyclists on the street, who vastly outnumbered the loading vehicles.

Now the street is quiet and civilised during the main hours of the day. It’s good for people with prams, and for children cycling. 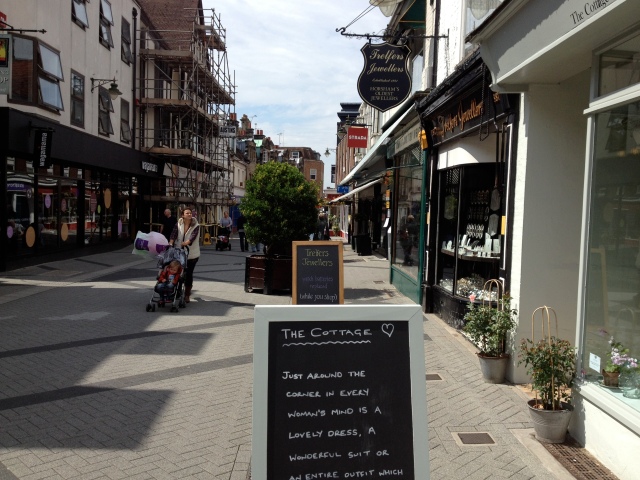 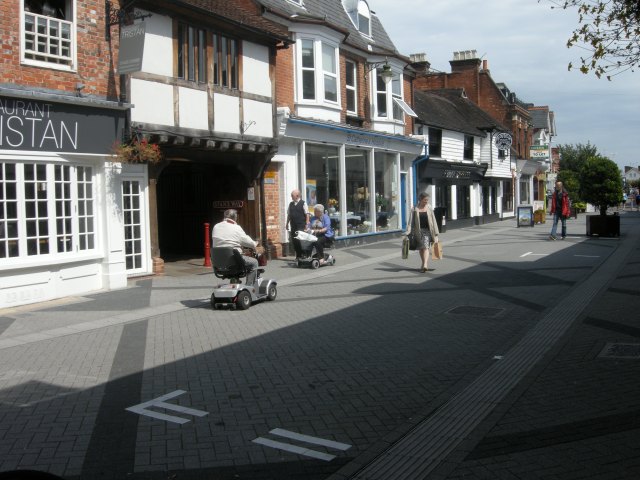 And just good for people, generally. 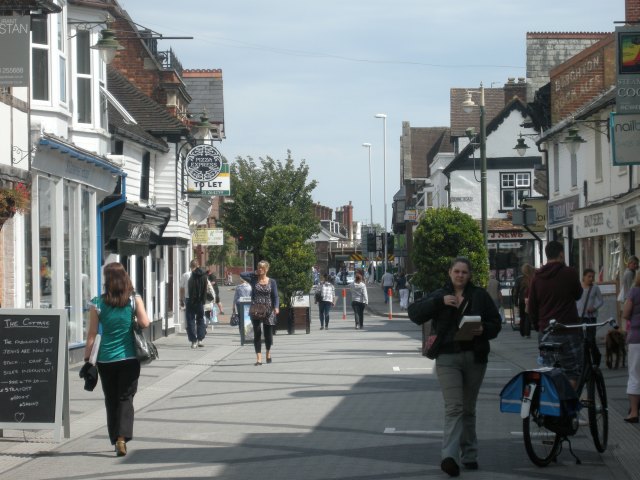 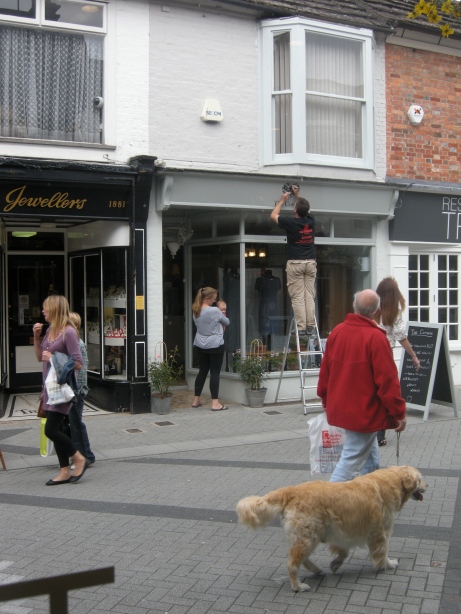 And let’s not forget that it’s good for the shops and restaurants, too. East Street is now one of the best places in Horsham, where people are happy to relax, mingle and just hang about. That means more custom and trade. You don’t need cars on the street for good business. 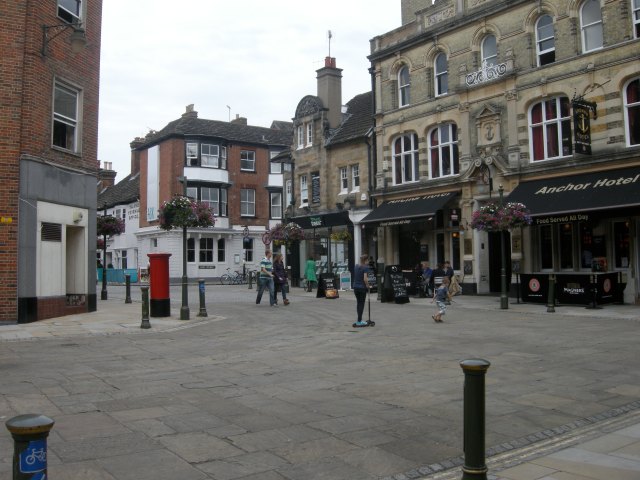 This is a beautiful square, and I think it is now about to come into its own. The area of the square itself – previously principally used for the parking of vehicles – is on the verge of becoming a proper, continental-style piazza, with tables and chairs on the space. There are two bars, and a smart new cafe, on the northern side of the square, already with tables and chairs outside, and a new restaurant is planned for the Town Hall building itself, with proposals to place 42 tables in the square. 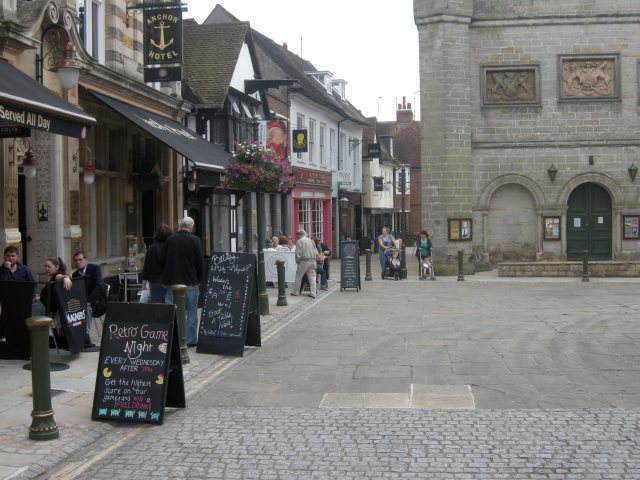 Market Square. The Town Hall building, shortly to have a restaurant in its ground floor, is in the background.

Horsham is on the verge of having a truly fantastic town centre, especially when you consider that the rest of it is largely pedestrianised, with only one one-way route for vehicles through it. The real genius of East Street and Market Square – at least for me – is that bicycles are still permitted to use the space, alongside pedestrians. It would be nice if some of the rest of Horsham town centre’s pedestrianised zones were opened up in a similar way, but perhaps that is something for the future.

Children cycling (illegally) in the pedestrianised central Carfax of Horsham

It has to be said that, at least as far as the town centre is concerned, Horsham District Council and West Sussex County Council have made enlightened decisions – and made great progress – over the last few decades, in civilising the town centre. They have appreciated that a successful town centre relies upon a relaxed, calm and pleasant environment. I hope that progress will continue, and also that we begin to see the adjustment of roads and streets across the rest of the town, principally those major through-routes that are at present quite intimidating to cycle on. A new consultation document is certainly promising; more on that to come.

5 Responses to The civilising of Horsham town centre