A district councillor in Horsham, Philip Circus, has a ‘provocative’ column in the local newspaper, the West Sussex County Times. Judging by the typical character of his output, it is usually safe to take ‘provocative’ to mean ‘ill-informed’ (a staple is climate change denial) and the current column, entitled Why British cyclists are not always heroes, is no exception.

The success of British sporting cyclists at the Olympics and the Tour de France has, it seems, presented Mr Circus with a golden opportunity to unburden himself of his latent prejudices about cycling as a mode of transport. Stating that ‘transport policy has to start with the safety of people on two feet’ (admittedly, a very promising start) he then proceeds to write at great length about the dangers posed to pedestrians by… cyclists, curiously saying absolutely nothing about the much larger danger – both objectively and statistically – posed to them by motor vehicles.

Between 2005 and 2009, ten pedestrians were killed by cyclists and 262 seriously injured. And many readers of the County Times will not be remotely surprised by the figures.

Quite why readers of the County Times would ‘not be remotely surprised’ by these figures is not at all clear, especially when we examine the pedestrian casualties in Horsham, where there have been two pedestrian deaths, and twenty serious pedestrian injuries, in Horsham and the immediate vicinity, between 2005-11 (data from crashmap.co.uk).

As a numerate and informed reader of the County Times might already have guessed, on the balance of probabilities, none of these pedestrian deaths or serious injuries involved a cyclist; all twenty-two involved one (or more) motor vehicles.

Of course, these figures are not quite as damning as a bold statement that ‘262 pedestrians were seriously injured by cyclists’, and it is natural to suspect that only someone with an axe to grind would choose to present the figures in such a context-free manner. This is even before we start to address the issue of responsibility, which Mr Circus has decided to unilaterally attribute to cyclists, stating without evidence that they ‘killed’ pedestrians, when of course many of those cyclists may have been completely blameless.

In any case Mr Circus – who let’s not forget has started and finished his column with a plea to focus on the safety of those on two feet – has absolutely nothing to say about the effects on the safety of pedestrians resulting from other modes of transport.

Given these figures, are bicycles really the most pressing safety issue for pedestrians?

a sense of superiority which,

with cycling being put on a national pedestal… is likely to increase further and with it the dangers to pedestrians.

Has Mr Circus really considered whether a cyclist using the pavement or going through a red light actually believes him or herself to be ‘superior’? Has he thought about their motives? If he did, even for a moment, he would divest himself of the bizarre opinion that  the success of Chris Hoy or Laura Trott in a velodrome many miles away is going to have any bearing on their behaviour whatsoever.

Anyone who walks around Horsham has seen it. Despite dedicated cycle lanes being provided for cyclists, you will see cyclists weaving in and out of pedestrians on the pavement.

This presents a curious paradox. ‘Dedicated cycle lanes’ have been provided, and yet cyclists are choosing to weave in and out of pedestrians on the pavement! Why on earth would this be? Perhaps these cyclists prefer, for some reason, to lengthen the time and distance of their journey by cycling around pedestrians? Or, they are masochists, who like to make their journeys more arduous? Or perhaps they delight in annoying pedestrians, so much so that the bike lanes – however fantastic – are ignored?

Of course none of these theories is a rational or sensible explanation. The only reason cyclists are using pavements is because the ‘dedicated cycle lanes’ in Horsham Mr Circus refers to are actually non-existent, or desperately poor, and the roads they might usefully be on are intimidating to negotiate on a bicycle.

And here’s the proof – the main arterial roads in Horsham. (All pictures were taken at around 6pm last Sunday, when traffic levels were considerably lower than during a weekday.)

Worthing Road, the main entry road from the south. A fast and busy road. No cycle lanes here.

The Bishopric, the main road into the centre from the west. No cycle lanes.

Springfield Road. No cycle lane northbound. Only a ‘door zone’ 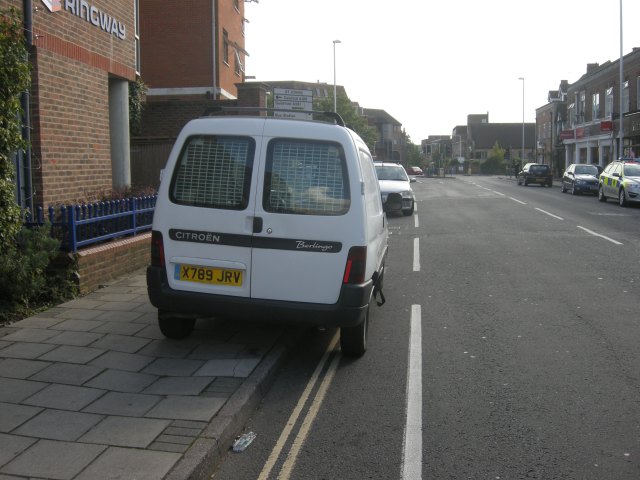 Springfield Road, southbound. A desperately narrow cycle lane, that is usually blocked, just like in this picture.

North Parade. Cycle lanes here, but dangerously narrow and bumpy, and they disappear at pinch points, leaving you to ‘negotiate’ with passing vehicles. With a 30 mph limit, cycling on the wide pavement here is understandable

Hurst Road. No cycle lanes. But plenty of parked cars to negotiate your way around. Which is fun. The pavement would feel much safer. 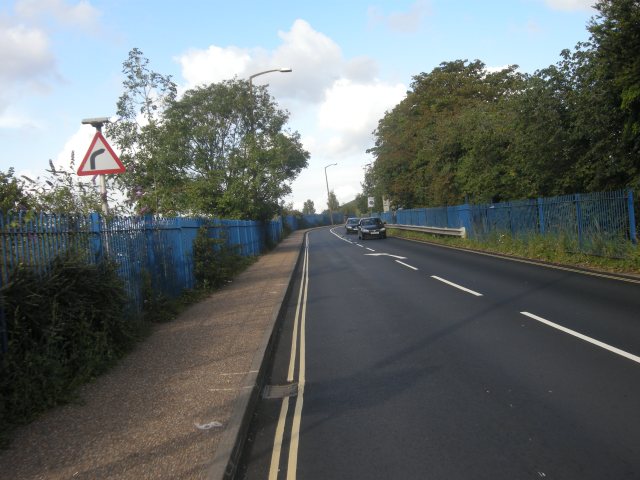 North Street, the railway bridge. No cycle lanes. One of the most unpleasant stretches of roads to cycle on in Horsham

Kings Road. Only a cycle lane in the southbound direction, itself of extremely dubious quality, and intermittent at that. Again, a fast, straight and busy road, where pavement cycling is rife, and understandably so.

Harwood Road. A road with a 40 mph limit, and no cycle lanes. Again, cycling on the pavement here is a perfectly rational response 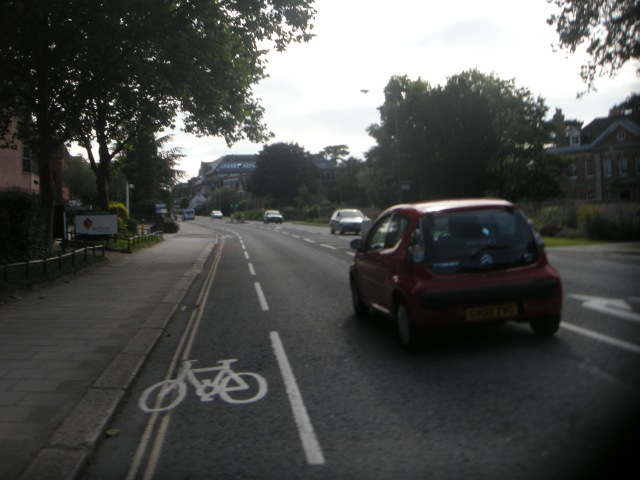 North Street. This is as good as it gets for cycle lanes in Horsham. 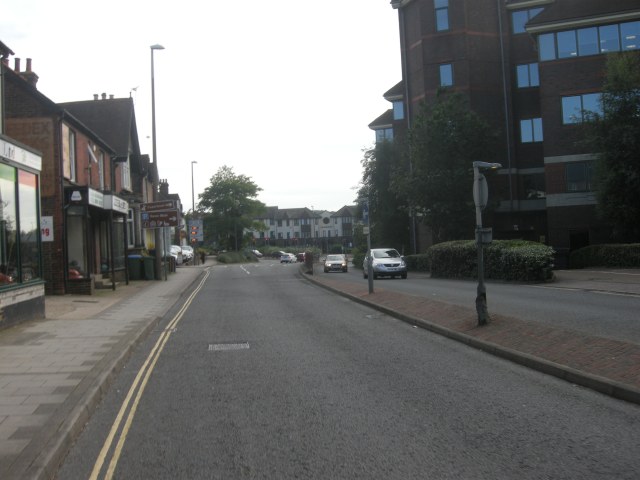 Although that same cycle lane on North Street soon disappears. 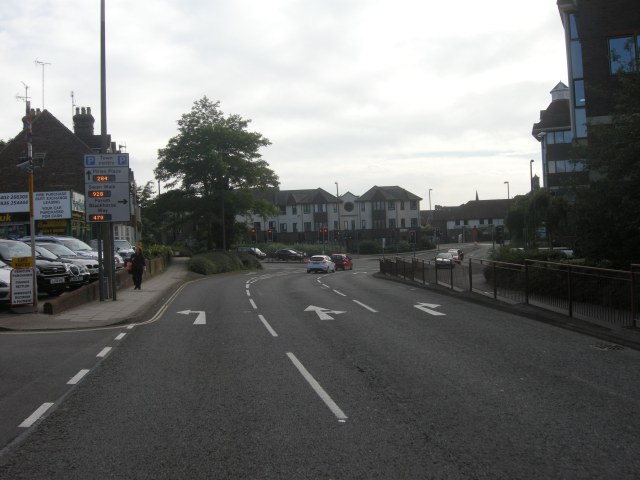 The junction of North Street and Albion Way. No cycle lanes here, only a 3-lane-wide intersection. Note also the turning conflicts implicit in the middle lane. Cycling right? You’d better hope a driver going straight on is paying attention

Albion Way. No cycle lanes. Like the picture above, not a place for an inexperienced cyclist.

Park Way. No cycle lanes here either, and again, multiple lanes to negotiate at junctions. 4 queuing lanes nortbound (just out of sight). Right turns not advised for the nervous.

And finally, Brighton Road, the main road into Horsham from the east. No cycle lanes.

On all the main routes in and out of Horsham, then, cycle lanes are almost entirely non-existent, and in the few places they do exist, they are frankly of such a dangerous quality it would probably be better if they were removed. That means anyone who chooses to cycle lawfully around Horsham will have to cycle next to and amongst rapidly-moving vehicles, ‘taking the lane’ at pinch points and at junctions, and will have to have the nerve to cycle well away from parked cars and also to negotiate out into the second or even third lane of fast flowing traffic.

The idea that people cycling on pavements in Horsham are wilfully choosing to ignore wonderful infrastructure that has been laid on for them is therefore manifestly absurd. That infrastructure does not exist. Cycling on the main roads in and out of Horsham feels dangerous, and is stressful and unpleasant. That is why pavements are being used; not because of an innate sense of ‘superiority’ or ‘self-righteousness’ on the part of cyclists, but because of simple self-preservation.

The three nice ladies in their fifties who attended a Bikeability class with me last year in Horsham came from their homes, and returned to them, almost entirely on pavements. They wanted to use their bicycles to make short trips in town, but were terrified of the roads, and hoped some instruction and training would help them. They were not hooligans, or anti-social; they just wanted their journeys by bike to feel safe and pleasant. The pavements were – and still are – their best option. That state of affairs is almost entirely the responsibility of Horsham District Council.

I hope the District Councillor bears that in mind the next time he decides to write about road danger and the behaviour of people on bicycles, and that instead of imagining into existence infrastructure that doesn’t exist and dreaming up strange motives for cyclists’ behaviour, he reflects on the actual sources of threat posed to pedestrians, and the concomitant problems faced by those who might want to use bicycles for everyday trips.

28 Responses to A curious paradox