Up, down and around the Hierarchy of Provision

Posted on October 30, 2012 by aseasyasriding

The Hierarchy of Provision – the official approach to improving roads and streets with the aim of enabling and encouraging cycling – has come in for a fair bit of stick recently, from a variety of sources, including this blog.

One of the main issues, if not the issue, we all seem to have with the Hierarchy is its lack of clarity about the appropriate treatment for a particular road or street. It suggests attempting to apply a series of different measures, in order of importance, to streets, apparently regardless of the function of those streets.

This is the Hierarchy as it appears in the Department for Transport’s Cycle Infrastructure Design [pdf], LTN 2/08 – 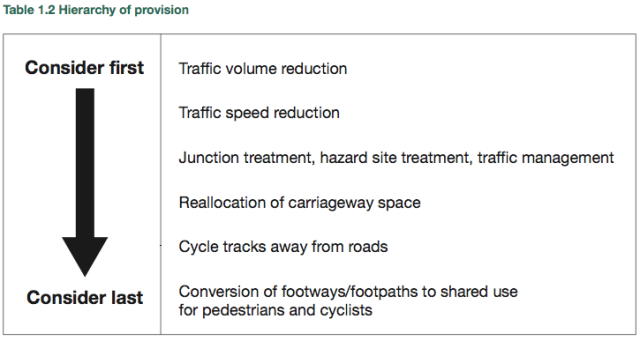 And this is how it appears again in the DfT guidance published last month, Shared Use Routes for Pedestrians and Cyclists [pdf], LTN 1/12 (note that it has been slightly modified) –

The changes amount to an insertion of ‘HGV reduction’, and the replacement of ‘cycle tracks’ with ‘shared use’ (it should be stressed, as I pointed out in this earlier post, that this DfT document isn’t very clear about what ‘shared use’ actually means).

Finally, the CTC version of the Hierarchy of Provision included in their new briefing note, Cycle-friendly design and planning [pdf], is different again, and is, in my opinion, the worst of the three versions –

The reason it is the worst is because it advises ‘conversion of footways’ if space cannot be reallocated from the carriageway. It does not countenance the construction of cycle tracks, away from the road, if carriageway space is not reclaimed.

Personally, I believe high-quality cycle tracks should be created regardless of whether motor traffic is, or can be, reduced, if space is available. But the CTC have seemingly sacrificed good quality provision on the altar of reducing motor traffic; the type of provision seen in the photograph below would not be considered under the Hierarchy seen in the CTC briefing note. 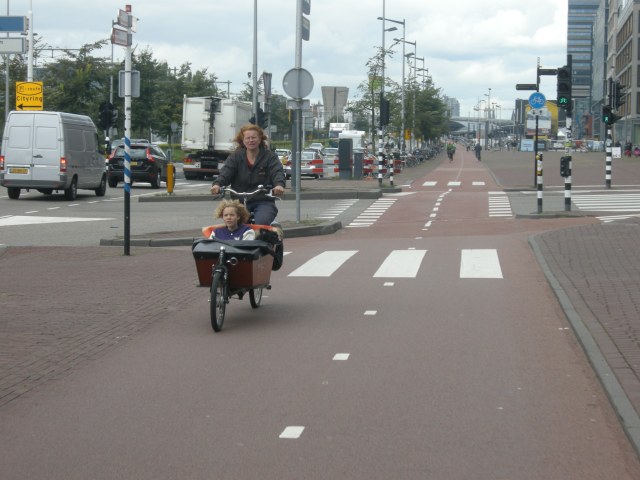 Amsterdam. Carriageway space has not been reclaimed, nor has motor traffic has not been reduced on this road. But the footway has not been converted to ‘shared use’; a cycle track has been built away from the road.

The CTC had this to say just the other day, in response to a call for them to demand high quality segregated provision, instead of plumping for second best –

The danger with: “[d]emand the best, and who knows, we may even get what we want one day” is that it is exactly right – we don’t know, and we may not get what we want. We may get ersatz segregation, which could be far worse.

I think this comment is, frankly, a bit rich when you consider that “ersatz segregation”, in the form of the conversion of footways, is actually endorsed by their very own hierarchy, in situations where carriageway space is not reallocated.

Consider, hypothetically, that TfL won’t reallocate carriageway space or consider the reduction of traffic speed or volume on a particularly busy London road. Perhaps on the A24 in Merton, which is currently open to consultation –

We run our fingers down the CTC’s hierarchy, finding out, to our slight surprise, that we have to resort to converting this footway to shared use; the very kind of “ersatz segregation” the CTC present as a bogeyman, a reason why asking for segregation of any kind is potentially dangerous.

To me it is rather odd that ‘conversion of footways’ is even included as an option at all, especially by an organisation so wary of the perils of poor off-carriageway provision; the principle of ‘footway conversion’ lies behind nearly all the terrible ‘infrastructure’ that has made the UK something of a joke when it comes to cycling provision. 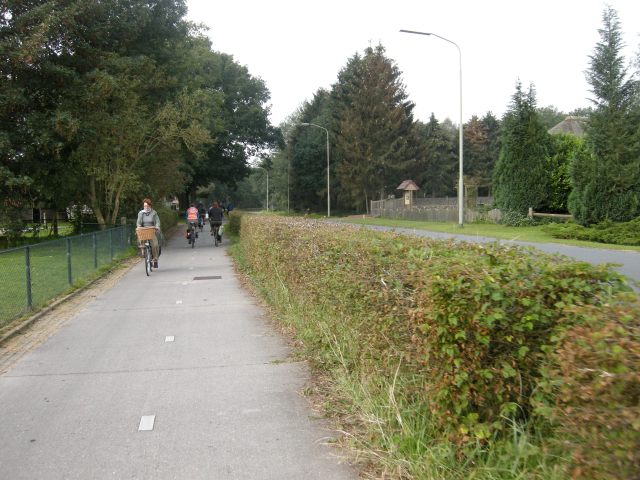 That is, semi-rural roads, with little motor traffic (at least by UK standards) and speed limits of 30 to 40 mph. The Hierarchy would maintain that ‘cycle tracks’ (or, worse, ‘shared use footways’) would be the last resort here, and might not even be necessary given the low traffic volume. This is a stance that Chris Juden of the CTC has argued the Dutch take too –

Separate sidepaths are a last resort for the Dutch too. They are provided where the road simply must carry significant traffic at a much higher than cycling speed.

But this doesn’t make any sense, because there are many, many roads and streets in the Netherlands where motor traffic volume is very low indeed, and that have low speed limits, yet cycle tracks are still provided alongside them, for the ease, convenience and comfort of cyclists. This is because Dutch design starts from the principle of keeping cyclists away from motor vehicles, as much as is possible. The Hierarchy, on the other hand, starts from the principle of trying to keep motor vehicles and cyclists together, as much as is possible, which is obviously very different. (David Arditti has provided a long and detailed rebuttal of the misunderstandings of Dutch policy contained in the rest of that comment by Chris Juden).

if scheme objectives suggest a clear preference for providing cyclists with an off-carriageway facility, as might often be the case in rural settings, creating a shared use route might be highly desirable… Such routes can be particularly valuable where a considerable proportion of cycle traffic is for recreation, and they could be of particular benefit to children and less confident cyclists. In this situation, on-carriageway provision could be last in the hierarchy.

In other words, if you are concerned about providing for children, consider first what the Hierarchy recommends last.

Another ‘Dutch’ defence of the Hierarchy of Provision involves presenting it as a way of achieving Dutch infrastructure. One of these was on Twitter from Adrian Lord –

how can you create dutch infrastructure without HoP? Demolishing buildings instead?

The clear implication being that the Hierarchy of Provision is necessary for the creation of Dutch-style infrastructure; that cycle tracks can only be created once we have applied the measures of the Hierarchy, namely ‘traffic reduction’. If we don’t reduce traffic, we can’t fit in the cycle tracks without ‘demolishing buildings’.

For a start this ignores the fact that cycle tracks can be (and are!) built alongside roads and streets without any reduction in motor traffic. Indeed, cycle tracks are presented by the Hierarchy as the solution when you can’t reduce motor traffic volume, or speed. As, typically, these kinds of roads are already very large and wide, ‘demolishing buildings’ is obviously not necessary.

This strikes me as a recipe for complete confusion when we come to consider a busy road, because on the one hand we have some advocates of Hierarchy saying that we can only build cycle tracks if we reallocate carriageway space, having already reduced motor traffic, and, conversely, the Hierarchy itself saying that cycle tracks are appropriate where motor traffic cannot be reduced. Which is it?

Another example. A similar kind of point to that made by Adrian Lord was presented in a series of tweets from Mark Strong –

As a local I can tell you that [Old Shoreham Road in Brighton] actually is good example of hierarchy of provision.

It was only possible due to Brighton bypass leading to traffic reduction on old A27.

Plus more recent decisions to reduce A270 speed limits to 30 from 40.

Again, a claim is made that it was a policy of following the Hierarchy of Provision that enabled the cycle tracks to be built. In this case, Measure 1 (traffic volume reduction) was achieved by the construction of the A27 bypass around Brighton and Hove (which runs parallel to the A270, the Old Shoreham Road), and Measure 2 (traffic speed reduction) was achieved by lowering the speed limit on the A270, from 40 mph to 30 mph. Once these measures had been implemented, then the tracks on Old Shoreham Road could be built.

I note, in passing, that we could also interpret the Hierarchy completely differently. We could use it to call for the implementation of cycle tracks on Old Shoreham Road with its pre-existing high volume of motor traffic, travelling at higher speeds, because it states that cycle tracks are the necessary solution on roads with high traffic volumes and speeds. In other words, cycle tracks should be built on busy roads as a first principle; we shouldn’t have to wait for other roads to be built as a way to reduce volume, or to wait for the speed limit on the road to be reduced before we start construction.

There is a further, final problem with this claim that the upper principles in the Hierarchy are used to ‘pave the way’ for off-carriageway provision, and to make it possible. Namely that, in reality – in the way the Hierarchy is used in both CTC and DfT guidance – those upper principles are presented as ways of rendering cycle tracks unnecessary. For instance, from LTN 1/12 –

Table 4.2 [a speed/flow diagram] gives an approximate indication of suitable types of provision for cyclists depending on traffic speed and volume. It shows that adopting the upper level solutions in the hierarchy (i.e. reducing the volume and/or speed of traffic) makes on-carriageway provision for cyclists more viable.

I have seen similar claims about the function of the congestion charge in central London; that it has rendered cycle tracks unnecessary because of the reduction in motor traffic. Incidentally, this is a position that the CTC are hoping will prevail on Lambeth Roundabout, in that they have opted for a design that is only suitable for considerably lower motor traffic volume. But we also have the same CTC officer stating that the congestion charge is also making carriageway reallocation for infrastructure possible, just down the road –

the reason TfL was able to remove a lane from Millbank for the 2m wide cycle lane was because traffic volumes were relatively low – ie, measures at the top of the Hierarchy had already been implemented (congestion charging).

Whether these ambiguities are symptomatic of the Hierarchy itself, or in the way it is able to be interpreted, is probably immaterial. The fact is that the Hierarchy is woefully vague, even downright confusing, and it desperately needs to be updated with guidance that is precise about what kind of provision is necessary on a particular kind of road or street.

If you haven’t already done so, do read Joe Dunckley’s take on the Hierarchy, and David Arditti’s lengthier analysis of CTC policy based on it

10 Responses to Up, down and around the Hierarchy of Provision