The significance of the TfL cycling funding

Posted on December 4, 2012 by aseasyasriding

The big headline for cycling at the end of last week was the £1 billion worth of funding announced by Boris Johnson for cycling improvements in London, spent over the next ten years, which made the front page of the Times.

The figure isn’t £1 billion, of course – to be precise, it’s £913 million. This number is made up of £640 million ‘extra’ funding, on top of the £273 million already set out in Transport for London’s ten year plan. So Boris is indeed planning to treble spending on cycling over the next decade, at least compared to the original baseline funding. We can see how significant this is by looking at TfL’s funding for cycling over the last decade – 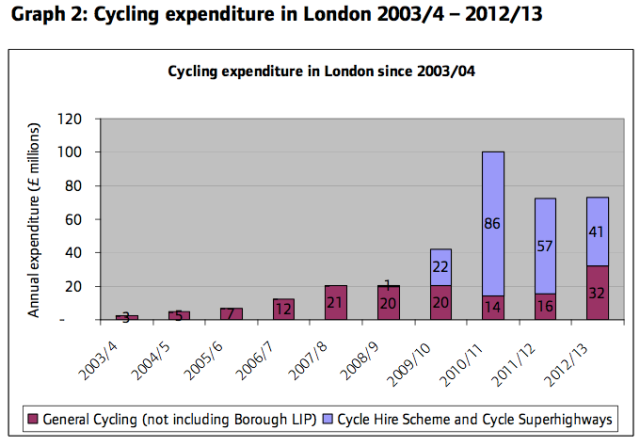 From the London Assembly’s Gearing Up report

There was some carping over the weekend – from myself included – about the significance of the announcement, particularly about the presentation of the ‘£1 billion’ figure, in the light of the small increase in funding it actually represents, compared to the last three years. But make no mistake, this is a large sum of money. It amounts to over £10 a head for the London population, per capita. This is not Dutch (or Danish) funding commitment, but it should be enough to start getting things done properly – about which more in a moment.

This announcement of funding for London does do one important thing in particular – it demonstrates quite clearly the pitiful size of the ‘extra’ £20 million announced by Norman Baker for cycling improvements across England only a few days earlier. Unlike the TfL funding commitment, this appears to be just a one-off payment, presented at the Active Travel conference, no doubt as a feel-good announcement. But it’s barely a fifth of what Transport for London will be spending on cycling, in London alone, every year for the next ten years. By contrast, this £20 million will be spent across the entire country, and there’s no commitment to any future funding. While cycling groups, including the Cycling Embassy, welcomed the cash – it’s very hard not be grateful for funding, however small – it pales into complete insignificance in the light of the Transport for London announcement. It’s meaningless.

What’s needed is a firm commitment for a serious proportion of the Department for Transport’s budget to be put aside for cycling, each year, and every year. Enough of these scraps appearing intermittently every six months. If cycling is as brilliant as all the Ministers keep saying it is, they need to back up words with action. Boris Johnson, despite my reservations about his commitment, is at least starting to do that, and the government should follow his lead.

But of course the cash needs to spent in the right way. It’s all very well committing to £90 million a year for spending in London, but if TfL do things badly, they’re effectively wasting it, because at some point in the future the work is going to have to be undone, and redone properly. The consultation for Superhighway Five – from Victoria to New Cross – opened yesterday, and while there are some good things in the proposals, there are some aspects of it that are still awful, and nowhere near the standards of Go Dutch that the Mayor has pledged to implement all future Superhighway developments to.

One really standout example is at the Vauxhall Cross gyratory (doubtless there are more examples along the length of the route which can be picked out). The better of the two Options proposed taking away a traffic lane on the (one way) Harleyford Road, and replaces it with a two-way cycle track, the intention being to allow cyclists to progress more or less directly across the gyratory, without having to make complex movements across three or four lanes. 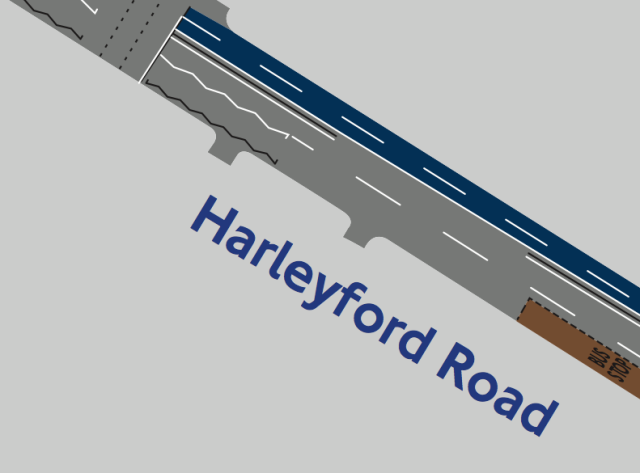 The lane on the left, shown in the picture below, will be replaced with a track. If done properly, it should be plenty wide enough for two-way cycle traffic. This is good. 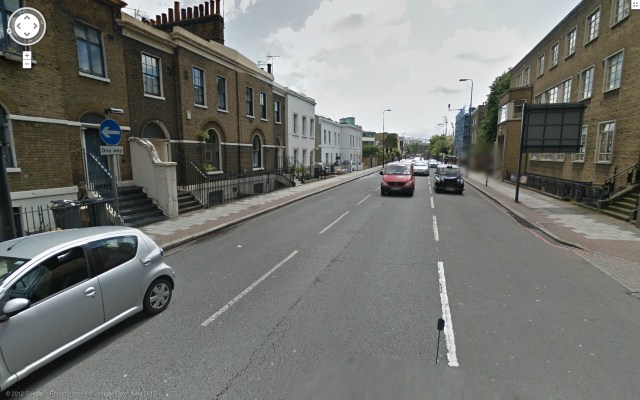 However, as is often the case, however, the problems come at junctions, and the entry to the track heading west is deeply problematic. 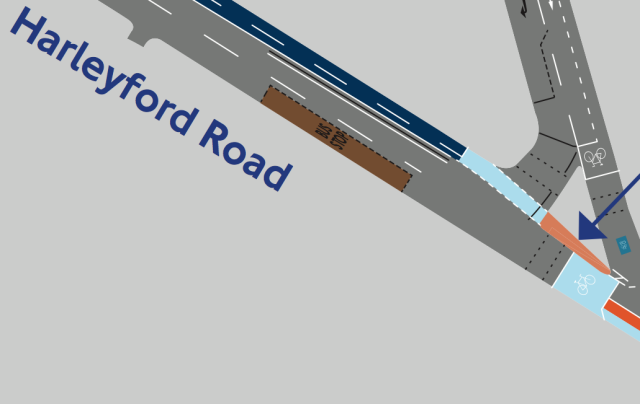 There’s an ASL, which means cyclists can position themselves on the right for entry into the track when the lights change. But what about when the lights are green? You need to get across two lanes of traffic to move into the track. I can’t see this kind of manoeuvre being at all attractive to the people who would like to cycle across this gyratory in comfort, and it rather defeats the point of protective measures elsewhere. Just as a chain is only as strong as its weakest link, so a cycle route can be rendered pointless if there are difficult gaps in it.

Money – some of that £913 million – will be spent implementing this design at this point. I think that would be a complete waste. Money needs to spent properly, on good designs, that won’t need to be tinkered with in years to come, and that are suitable for cyclists of all abilities.

In a similar vein, Transport for London also need to have a good look at their ‘early start’ traffic light design, which is now increasingly prominent in their designs, appearing several times on this Superhighway route. While the principle of separating movements is sound, in reality, as Paul James shows, this is an ‘always stop’ design for cyclists; arriving at these junctions on two wheels, and you will always hit at least one red light. Again, that’s not good enough. You can’t spend serious money on junction designs that needlessly impede cyclists, and tempt them to jump lights in a way that defeats the purpose of the design.

Money is starting to appear; while that’s excellent, and shows up how the desperate paucity of central government’s commitment, it’s really important it doesn’t get thrown away.

21 Responses to The significance of the TfL cycling funding