Posted on December 30, 2012 by aseasyasriding

While digesting over the Christmas period, I’ve also been rummaging around in the latest Travel in London Report [pdf] from Transport for London, published last week.

There are some interesting trends emerging with regard to cycling. First of all, it’s worth taking a look at that much touted ‘boom’ in cycling in London.

As you can see, the rise in the number of cycling stages [1] has actually been more or less continuous since 2000. There doesn’t appear to have been any significant change in the rate of increase; only a blip, then tailing off, in 2005/2006 (possibly related to people avoiding public transport in the wake of the 7/7 terrorist attacks). The Superhighways and hire bikes – Boris Johnson’s big initiatives – don’t appear to have had a significant effect on the rate of increase.

The graph does show that, impressively, the number of stages being made by bicycle in London has very nearly doubled over this period, from 0.29 million per day in 2000, to 0.57 million per day last year. But this rise needs to be placed in context – firstly, against the fact that nearly 30 million journey stages are made across London every day, by all modes of transport. Those 0.57 million bicycle journey stages don’t add up to much in the context of overall transport in London.

Secondly, it’s worth stressing that the rise in cycling has been built on a very low base indeed; it’s much easier to double the number of journeys made by bike when the numbers cycling are very small in the first place, than to go from, say 10% to 20% of all journeys – that would involve getting many, many more people onto bikes than is the case in going from 1% to 2%, which are much easier pickings.

It’s also worth noting that, as you can see on the graph above, the overall number of journey stages made per day in London since 2000 has also increased substantially, by around 5 million. This overall rise in journeys made by all modes of transport will obviously dilute that doubling in the number of cycling stages, which would be more realistically expressed as a percentage of all stages – 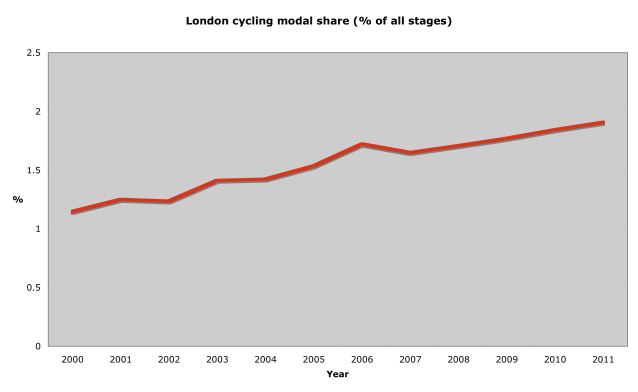 Expressed like this, we can see that the rise is less impressive; from about 1.2% of all trip stages in 2000, to 1.9% of all trips stages year. This is going in the right direction, but hardly dramatic. Assuming that cycling continues to rise at this rate (a 0.75% increase over 11 years), then by 2026 cycling’s modal share in London may have risen by about 1% on current levels. That is, we might just be scraping a 3% modal share, which will obviously mean that Boris’s much-quoted (and unambitious, according to the GLA) target of a 5 per cent mode share for cycling by 2026 [pdf] will be missed, and missed by some distance.

Further, at this rate of progress, it will also take about 340 years – more than three centuries – to reach a 25% cycling modal share, the current level in Rotterdam, one of the Netherlands’ worst-performing cities for cycling.

This should cause those who proclaim that we have reached the promised land to pause for thought. While it might be impressive to see 45 cyclists at one traffic light during the morning rush hour, this is by no means a revolution. The reason it might appear to be so is because we’ve gone from seeing practically no cyclists at all to quite concentrated pockets of fit, male 25-44 year olds commuting into work on certain routes in central London.

The overall picture, however, is one of very slow change, or no change at all. This is hardly surprising, given that London’s roads have hardly changed in character over the intervening period. They are still hostile and intimidating places to cycle for the vast majority of Londoners. There may even be good reason to suppose that, without continental-style infrastructure, the rate of uptake of cycling in London will decrease, or even come to a halt, as we exhaust the supply of people willing to cycle on the roads as they currently exist. Food for thought.

The other pattern emerging from the data in the Travel in London report (and from another TFL report) involves cycling casualties. 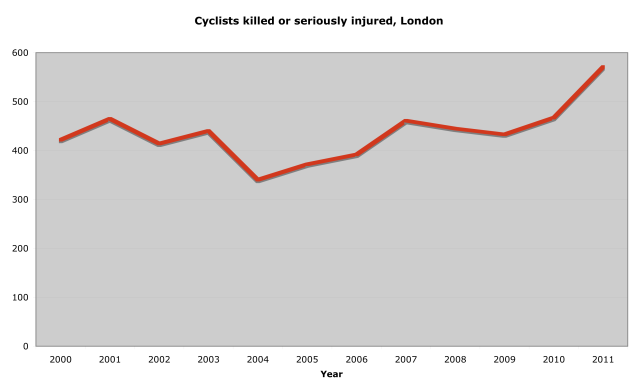 The number of cycling deaths and serious injuries rose steeply to 571 last year, an enormous rise of 22% on 2010, and continuing the upward trend seen since 2009.

It’s worth mentioning here that in 2001 Transport for London were set a stringent target of a 40% decrease in the absolute numbers of people killed or seriously injured while cycling by 2010, against a 1994-98 average baseline of 567 deaths or serious injuries per year – in effect, a target of 340 cyclist KSIs per year. That target wasn’t met in 2010, and in 2011 the number of KSIs actually exceeded the 1994-98 figure; not even a decrease at all. Of course, the amount of cycling has increased substantially since 2001, but that shouldn’t matter. The 2001 Road Safety Action Plan set an absolute target while fully aware that cycling would increase.

The picture for all cycling casualties isn’t much prettier.

The slow pattern of decline from 2000 has gone into reverse; just as with KSIs, the absolute number of casualties has risen sharply over the last couple of years.

Of course, increases in both KSIs and all casualties are, as I have already hinted, attributable in part to the growth in cycling over the last decade. It makes more sense, then, to express these as rate-based figures. Unfortunately, the best we can do from the TfL data is to express casualties per million cycling stages.

This isn’t a perfect method; it only captures the number of journeys being made, not the total length of trips, or amount of time spent cycling, either of which would give a more precise measure of exposure. However, I don’t see much reason for supposing that typical trip distances will have changed much over the years in question. And we can’t do much else. So here are all cycling casualties, rate-based – 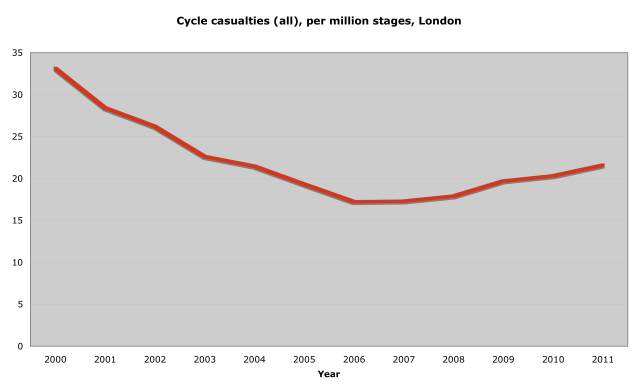 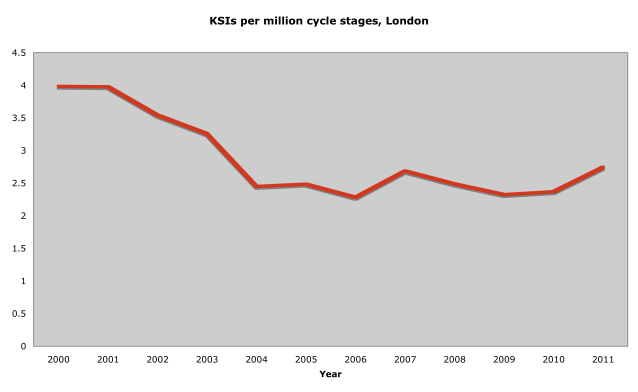 The most obvious feature is that the relative risk of cycling, in decline for the first years of the millennium, now appears to be increasing, both for KSIs and overall casualties, over the last few years. The upward trend in casualties starts in about 2006; that for KSIs, about 2009. Things are clearly getting worse, rather than better, despite more people cycling. There is no ‘safety in numbers’ effect apparent over the last five years; quite the opposite, in fact.

I would hazard a guess that it is graphs like this, alongside awful tragedies like the deaths at Bow roundabout, that have spurred the Mayor and Transport for London into taking London Cycling Campaign’s Go Dutch agenda quite seriously. There is an emerging safety problem with cycling in London, with the rise in casualties now consistently outstripping the rise in cycling numbers; it is no longer possible to pretend that a growth in casualties is simply the result of more people cycling.

Why cycling is becoming relatively more dangerous, I don’t know. If I were to idly speculate, it might be because some of the people new to cycling on London’s roads are unprepared for the quite real dangers they face, lulled into a false sense of security by advertising campaigns like this

which are not at all representative of the actual experience of cycling on roads in London. But this is speculation. The real issue is a serious safety problem, that I suspect will only get worse if more and more people are encouraged onto the roads before necessary changes are made, and conflict between motor vehicles and bicycles is reduced.

[1] A ‘stage’ is simply a component of a ‘trip’. A trip to work might be made up of a cycling stage, a train stage, then a walking stage, for instance.

19 Responses to Some London cycling statistics