Be careful what you wish for

Posted on January 16, 2013 by aseasyasriding

The other week I got into some online discussion (I shouldn’t have, but it happened) with a handful of people who were in favour of mandatory helmet laws – laws which would make it compulsory to wear a helmet whenever anyone happens to ride a bicycle.

One of these individuals told me that I was ‘daft’ for cycling along Lancing seafront without a helmet, like this – 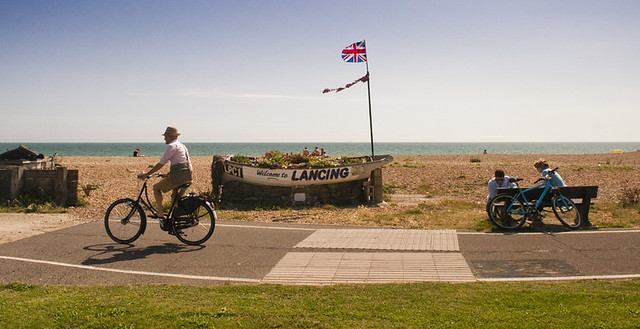 He also said these people

were ‘idiots’ because of their baggy clothing, and lack of helmets.

Maybe we might see a day when trundling along a path by a beach, a hundred yards from the nearest road, and where the greatest risk of injury might come from a low-flying seagull, I would be compelled to wear a thin polystyrene hat on my head. Maybe.

But if that day does arrive, then surely it is only a matter of time before we would logically be compelled to wear polystyrene hats for the simple act of crossing the road – which statistically is almost certainly far more dangerous than cycling along a path away from a road.

You may scoff, but the groundwork is already being prepared. I remarked last year about the unfortunate case of Joshua Dale, who was killed while crossing a road in Nottingham when a driver crashed into him. He wasn’t crossing the road on foot; he happened to be crossing it on his bicycle, which prompted the coroner at the inquest in his death to remark that

It’s imperative if we are to learn anything that children must be educated further and become more aware of the safety aspects of wearing helmets.

Not ‘cyclists’, note – children. Children crossing roads – presumably on foot, as well on a bicycle – should become more aware of the safety aspects of wearing helmets.

And more recently we have this news item from Eastbourne –

A cyclist who suffered serious brain injuries when she was knocked down on a crossing believes her cycle helmet saved her life.

Fifty-nine-year-old mother and grandmother Linda Groomes spent two years in hospital after being knocked down while pushing her bike across the crossing in Eastbourne Road at the junction with Church Street in September 2008.

Contrary to the headline of the article, Linda Groomes was not ‘a cyclist’ at the moment she was struck. She was a pedestrian, crossing the road on foot; she just happened to have a bicycle with her, and happened to be wearing a helmet, a device which she feels saved her life.

So there is an emerging precedent for the matter of helmet-wearing to be discussed in the context of crossing roads; either while crossing them like a pedestrian, but on a bicycle, or crossing them on foot, but with a bicycle.

My question for those who would like to see helmet-wearing made compulsory is – are you also in favour of mandatory helmets for people crossing roads? After all, apparently no one died because they wore a helmet but plenty have because they haven’t. What harm would it do to make people wear helmets when crossing roads? They might even help to save the lives of people like Joshua Dale, or Linda Groomes.

Helmets could be placed in receptacles at crossing points, so that people can use them when they need to cross the road. Conveniently, they could even be put in the same receptacles that contain the flags that people are already being encouraged to use to cross roads in some American towns.

So let’s hear it for helmets for walking across the road – they won’t do you any harm, but they might save your life. Safety first!

This entry was posted in Helmets, Road safety. Bookmark the permalink.

73 Responses to Be careful what you wish for