Posted on January 25, 2013 by aseasyasriding

A couple of weeks ago, Transport Xtra magazine received a letter on the subject of ‘bus stop bypasses’ – specifically related to Transport for London’s plans to run the cycle tracks they are proposing on Stratford High Street behind a ‘waiting island’, where bus passengers could embark and disembark from buses without crossing the cycle track.

The letter writer, Brian Dalton – while obviously sympathetic to the cause of cycling – didn’t really seem to ‘get’ the concept, which is a pity. His letter is below.

Transport for London’s cycle superhighway plan for bus stops is a good idea, in theory, but has implications in operation (“Bus stop ‘bypasses’ feature in cycle superhighway to Stratford” LTT 21 Dec 12). The cyclist, going along approaches a bus stop, what does he do? If there is no bus stopped, he doesn’t divert into a conflict area with pedestrians, he merely continues going on. But when the bus is stopped and potential passengers are making their way to get on the bus, the cyclist is pitched among boarding passengers just when their minds are elsewhere. This is not a good idea.

Bus stop lay-bys were removed for operational reasons which still hold good and I’m not suggesting they should be reintroduced. However, an inset area would allow the cyclists to pass the stationary bus within the confines of the nearside lane without the need for the use of the outer lane or, indeed, the opposing flow lane.

I know this might appear to be tickling at the design, but a cycle lane round the rear of bus stops would require a mass of safety fencing and tactile paving, that no-one understands, which would be expensive and unsightly and prevent free flow of pedestrians. The idea also shows that traffic engineers are still lumping together cyclists with pedestrians instead of keeping cycles where they belong, in the carriageway.

Sustrans’ Connect London is a project I would wholeheartedly recommend. At present the old London Cycle Network+, which provided about a third of the LCN, is a disjointed mishmash of provision. Although in the most part well-designed and built, there are massive gaps in the network combined with barriers to safer use that need to be addressed and tied together in a structured way. Sustrans is the organisation that, by providing an overview, successfully completed the enormous National Cycle Network and followed it up with the successful nationwide Connect 2 concept. They appear to be bringing that expertise to the rescue of London cyclists, which may be just what we need.

My response – which Transport Xtra have kindly published – is also not available without a subscription, so I reproduce it here –

Brian Dalton’s letter on the subject of Transport for London’s design for bus stop bypasses along Cycle Superhighway 2 to Stratford (Letters LTT 11 Jan) is confused in several respects.

Mr Dalton assumes that such a bypass would present anyone on a bicycle with an ‘option’ to duck behind a bus stop, instead of using the carriageway. He claims that, when a bus is not stopped, cyclists would naturally continue using the carriageway, as there would be no impediment to their progress.

But this is not how the Transport for London design works at all. The bypass is simply one small section of a continuous off-carriageway cycle track, physically separated from the carriageway. Anyone progressing along this cycle track would continue to use it regardless of whether a bus is halted in a stop or not; it would not make sense to divert from a cycle track into the carriageway even if a bus is absent.

Mr Dalton also claims that “a cycle lane round the rear of bus stops would require a mass of safety fencing and tactile paving”. While there will certainly be a requirement for defined kerb separation between the track and the pavement areas, and for tactile paving to indicate defined crossing points, I fail to see the need for a ‘mass’ of safety fencing. Guardrailing between pedestrians and motor vehicles along the edges of pavements is (thankfully) increasingly rare; it certainly should not be required in these cycle track designs.

Finally, the TfL plans do not “lump cyclists together with pedestrians”, as Mr Dalton suggests. Cyclists are to be given their own clearly defined space, a two-metre wide track that will be built on the existing carriageway, and separated from the pavement by kerbs. The bypass arrangement is the best way of allowing these continuous cycle tracks to pass the bus stop, while minimising conflict.

While there are some minor problems with the design, it is imperative to recognise that similar bus stop bypasses are standard practice in countries such as the Netherlands and Denmark – countries that have very high cycling levels as a consequence of well-designed infrastructure.

I suspect much of the confusion might have stemmed from the fact that the design is being referred to as a ‘bypass’, which implies giving people on bikes an ‘option’ to swerve behind buses – and also from the fact that we don’t generally seem to know anything about continental-style design for cycling in this country (witness Mr Dalton’s assumption that cyclists would be proceeding ‘in the carriageway’ both before and after the bus stop).

On the contrary, proper design for cyclists is continuous, like in this excellent mock-up by the Alternative Department for Transport. 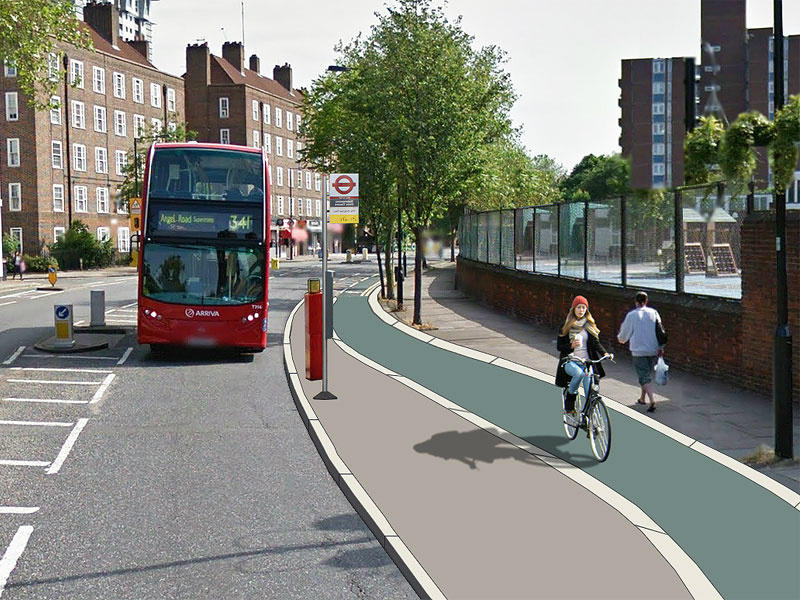 A cycle track like this provides an environment where people on bikes don’t feel the need to race along; they can cycle calmly, and in a civilised manner, which renders the need for the ‘protective fencing’ referred to by Mr Dalton completely unnecessary.

Furthermore such a design also means that buses and cyclists are not continually overlapping each other; buses having to overtake bikes between stops, and cyclists having to negotiate their way out around the bus while it is stopped. It works for both bus users and cyclists.

Another example from the Alternative Department for Transport –

Those children don’t look at all out of place on this kind of design. By complete contrast, I have yet to see any children cycling like that on that road, under its current configuration. It would be a startling and unusual sight.

If we’re really going to have a ‘cycling revolution’ in London, good design that works for all potential users of bikes is essential. Transport for London seem to be starting to head in the right direction (witness also their trialling of a Dutch-style roundabout with segregated tracks, for implementation at Lambeth Bridge), and we should welcome their boldness.