A simple guide to adjusting a Shimano Nexus hub gear

Posted on February 1, 2013 by aseasyasriding

I thought I’d impart a little bit of advice on an aspect of bike maintenance that was slightly foreign to me, and hopefully that I can explain with the aid of pictures. If you are an expert bike mechanic, then this probably isn’t the post for you, as I expect you know all this already. If not, then I hope it is of some use, if you have a gear set-up similar to mine.

The joy of a solidly built Dutch bike is that it is almost entirely maintenance-free, so these kinds of maintenance issues are something that you don’t really have to deal with. To put this into perspective, I’ve had my Workcycles Omafiets for about nine months now, and cycled with it in some pretty awful weather.

But apart from mending one puncture (a hawthorn spike went straight through my rear tyre), pumping up the tyres every month or so, and wiping down the frame and wheels with a cloth, what I am about to describe is the only bit of ‘servicing’ I’ve had to do. No chain cleaning, no brake maintenance – nothing else. (By contrast, my previous bike did require a fair amount of regular cleaning and maintenance of the transmission in particular, because it was exposed to the elements.)

After a few months of riding, I started to experience some small issues with my gears. Nothing too serious – just that they wouldn’t engage in the gear I wanted, or would jump from one to another. The problem results from the gear cable stretching with use, meaning that it is no longer pulling the parts of the hub gear into the proper position for smooth gear changes.

Anyway, here’s what you need to do to address this problem if you have a similar Shimano Nexus hub. The first thing to do is to set your gear adjuster in number 4 – it is marked with a small dot on the display, for clarity (mine is an eight speed, with a coaster brake – but the same principle applies for other Shimano hub gears; select the ‘marked’ gear). 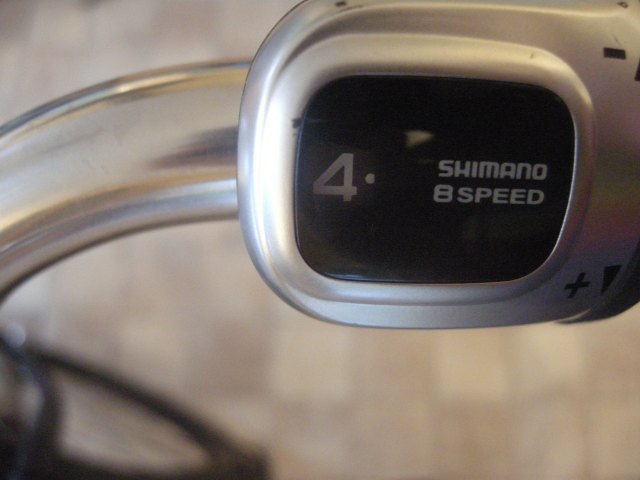 Next, you need to remove the chain case. Mine has a simple detachable rear section, that pulls off smoothly. Just squeeze in at the top to release –

then move back to detach.

This will expose the chain, and (for our purposes) the relevant part of the rear hub.

You will be able to see, by looking down on it, two yellow markings, just outside the chain – visible in the picture above.

If you want to eliminate clunky and uncertain gear changes, the two yellow markings have to line up (they represent the ‘fixed’ part of the hub itself, and the rotating adjusting section, that actually shifts the gears inside the hub – but that’s not too important).

It’s very easy to do this – you just need to fiddle with the gear adjustment knurl back up on the handlebars. It lies on the cable coming out of the gear shifter.

Rotating the knurl will allow you to line up the yellow markings. I was going to go into a description of which way you need to rotate it, but on reflection it’s much easier if you just turn it a little bit and see which way the yellow marking has moved. If it’s got closer, keep rotating in that direction; if not, you need to rotate it the other way.

Once they’re lined up, you’re all set. All you need to do is replace the end of the chain case (slot it in at the bottom first, then click the top bit in) and you’re ready to go. Done!

This entry was posted in Maintenance. Bookmark the permalink.