I blogged recently (as did several others) about the Mayor of London’s new Vision for Cycling document, which, while short on detail, appears to represent a new approach towards cycling in London; responding to the concerns and needs of the vast majority of Londoners who do not consider riding a bicycle to be an attractive or appealing prospect.

The Vision recognises that cycling in motor traffic is not something that most people want to do, and proposes policies that should make cycling a comfortable and pleasant experience in London – separation from traffic on major routes, and the removal of through traffic on quieter residential streets, to form ‘Quietways’.

One of the groups who stand to benefit most from this new strategy, if successfully implemented, are children and young people; a child on a bicycle is, in my experience, an extraordinarily rare sight in London, certainly away from the pavement. Even in London’s best-performing borough, Hackney, just 3% of children cycle to school, while 33% want to. I expect a similar, if not worse, picture across the rest of London; a massive amount of suppressed demand for cycling amongst the young.

As it happens, at precisely the same time the Mayor’s Vision is being launched, Transport for London are also consulting on a document entitled School and Young Person Delivery Plan: Setting our future direction which has the intention of, amongst other things, ensuring that Transport for London meet the needs of young people.

The foreword acknowledges that

Young people are significant users of the capital’s transport network; whether it is for their journey to school or college, meeting friends or family or going to work…. Using the transport network is incredibly important to young people and to enable them to get the most of London we have an important role to ensure travelling in London is a happy, healthy and safe experience.

This is very important because TfL estimate that there will be over 3 million people aged under 25 in London by the year 2031. TfL aim to promote, in their words, active, safe and responsible travel for these millions of youngsters. Cycling clearly should represent a solution here, given that

TfL faces a number of challenges on the transport network as the population of London grows, impacting on existing levels of congestion and air quality. Coupled with this, obesity levels are rising and so TfL has a role to play in encouraging Londoners to be physically active when travelling around the city…. TfL wants to encourage young people to choose active travel modes, such as walking and cycling, and ensure that they can travel in a safe and responsible way

So how does this consultation document fare on the matter of cycling for young people in London?

There are a variety of sections that tangentially relate to cycling, and unfortunately all are very disappointing. The section on ‘Community and Personal Safety’ is entirely about safety from crime. This is obviously important, but not the only way in which children can be put into danger.

The section on ‘Casualty Reduction’ is even worse. While stating that reducing child casualties are an essential part of TfL’s aim to reduce all casualties by 40% by 2020 (compared to 2005-9 average), and that

TfL wants to ensure that young people travel safely on London’s roads, whether they are young drivers, cyclists, motorcyclists or pedestrians

the strategy aimed at keeping these young pedestrians and cyclists safe seems to revolve entirely around education and training, and has nothing to say about making London’s road environment safer. Here are the ‘Objectives’ –

‘Educate young people’ to behave properly on the roads, give them the ‘life-skills’ to identify hazards, and ‘encourage’ young people to understand the consequences of their actions.

And that’s it. Pretty miserable stuff, not just because of a failure to address creating safer streets, but also because all this ‘education’ and ‘encouragement’ is only directed at children themselves. There is nothing in this strategy that talks about getting drivers to behave better, or ‘educating’ them to drive more carefully around children. Nothing. It’s victim-blaming of the worst kind.

How many of those 1,181 children were completely blameless, or were hit by speeding motorists, or motorists who ‘lost control’? The assumption on the part of TfL seems to be that, because children under 16 form 22% of all pedestrian casualties, this must be due to something that children themselves are doing; the strategy is focused on improving their behaviour, through campaigns like this –

But a disproportionate number of pedestrians will be children in the first place; they can’t drive, so will be walking to school, or walking to catch the bus, unlike adults, many of whom will be driving instead. TfL don’t seem to have taken this into account, and have simply assumed that children forming a high percentage of pedestrian casualties is because they are ‘behaving badly’, rather than because they a relatively large percentage of pedestrians will be children. It’s quite blinkered.

Later in the document, this thinking is again in evidence, in TfL’s ‘engagement’ with young people. Here’s one of the strategies –

The response to some boroughs having high numbers of teenage casualties is to ‘raise awareness of road safety and encourage responsible behaviour’ amongst teenagers in these places – no assessment of how and why these teenagers are being killed, whether driving standards might be lax in these boroughs, whether the streets are dangerous to cross or walk along, or whether there might simply be more teenagers out on the streets here.

TfL might, of course, be doing these things elsewhere, but why is this kind of rational approach completely absent from this document? Why shouldn’t higher driving standards, safer street design, or lower vehicle speeds be put forward as policies to reduce child casualties? Amazingly, it’s not in this strategy document. There is nothing about making junctions safer, or providing safe cycling routes separated from motor traffic. Nothing. Of the ten ‘initiatives’ TfL are proposing to increase child safety, every single one involves training or educating children. There’s no mention of reducing environmental danger. 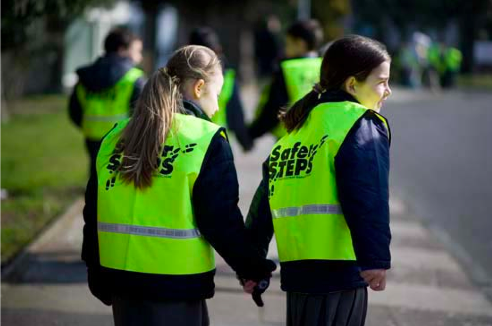 The same ‘educating’ and ‘training’ strategy is employed by TfL in ‘encouraging’ young people to walk and cycle, in the section of the document specifically on ‘Active and Independent Travel’. There’s a nice picture of some children engaged in cycle sport, strapped onto brakeless track bikes on a velodrome – obviously completely irrelevant for any child attempting to cycle to school or around their neighbourhood, not even useful training.

This is not transport!

The focus of the strategy in this section is almost entirely on ‘workshops’, ‘education’ and ‘training’, and encouraging schools to get more of their pupils to walk and cycle through accreditation schemes. Again, there’s nothing on making the roads and streets themselves attractive or inviting for walking and cycling.

I’m assuming this document was drafted in isolation of the Mayor’s new Vision for Cycling – it certainly reads like it. It might be wise if TfL ditched this consultation and came back with a new one that incorporated the eminently sensible strategy advice outlined in that new document, because it’s simply not up to scratch, certainly as regards cycling. We need safer, more pleasant streets for our children to walk and cycle one, and for a document about encouraging walking and cycling in these age groups to fail to even mention improving the streets themselves is quite scandalous.

The consultation runs until 27th March. Do have your say.