Posted on April 8, 2013 by aseasyasriding

There was some excellent news over the weekend, with the opening of the Two Tunnels route in Bath. The huge turnout, with people bikes and on foot eager to use this excellent new route into the centre of Bath, demonstrates that safe, pleasant and useful  infrastructure is in great demand; demand that is being suppressed by current conditions for cycling. 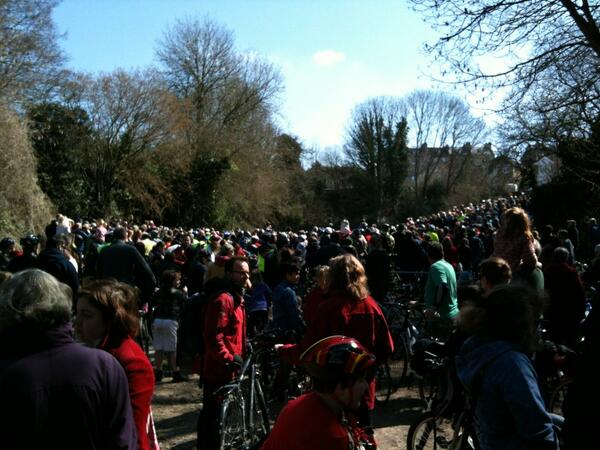 The money for this project came largely from Sustrans; they put aside £1m they had received from lottery funding. £400,000 came from the local council, and the rest from local fundraising. Sustrans do great work. I cycled from Bath to Bristol last year with the Cycling Embassy on portions of the Two Tunnels route, and on the railway path, a wonderful facility that was full with ordinary people, enjoying the experience of cycling away from motor traffic; there are a huge number of similar routes across the country that almost certainly would not exist if it had not been for the efforts of Sustrans.

But I think it speaks volumes that a charity should be doing this kind of work; we don’t expect roads or railways to be built by charities, so why on earth should essential transport infrastructure for cycling and walking be left to groups like Sustrans? As good as their work is, they have to get a lot done with (relatively) little cash. That’s fine for out of town routes, or routes linking towns and cities, but I think Sustrans run into problems when their routes hit town and city centres.

To be direct and useful, routes in these places require substantial investment, and this is something Sustrans are not able to provide. As a consequence, their routes will inevitably be rather circuitous, because they will have to compromise on their directness to get around obstacles like large junctions where there they don’t have the funding or ability to adapt them.

A good recent example is Sustrans’ Connect London project. This predates the Mayor’s Vision for Cycling, as Sustrans themselves argue –

The Mayor has proposed a ‘Quietways’ network which will deliver direct routes for cyclists on pleasant, low-traffic side streets. Sound familiar? That’s because it is. You heard it here first… Elements of the Mayor’s announcement echo the Connect London plan which aims to see London become home to the world’s biggest cycle network by 2020.

Simple, yes? The Mayor is proposing a ‘Quietways’ Network, and that’s exactly what Sustrans is doing! So the two elements overlap – Sustrans and the Mayor are demanding the same thing.

Well, it’s not quite that simple. The problem is that the Mayor’s Vision is quite explicit, proposing

A cross-London network of high-quality guided Quietways will be created on low-traffic back streets and other routes so different kinds of cyclists can choose the routes which suit them. Unlike the old London Cycle Network, Quietways will be direct.

I’ve put that last sentence in bold, because I think it is very important. The Mayor and TfL have grasped that the old LCN was a failure, because it was hopelessly indirect. As David Arditti has written –

[LCN+] made very little progress, having little political backing, and being mainly on borough roads where the Mayor had no direct control. It embodied a confused strategy, with some of the routes being convoluted, up-and-down backstreet affairs inherited from the original LCN (such as the slalom-like route just east of Finchley Road in Hampstead) that no commuter would use… Since the LCN+ strategy was basically not about segregation, or even road-space reallocation, there was no coherent picture to put to councils, be they pro or anti-cycling, of what was supposed to be put in place on proposed main road routes like LCN+5 on the A5, and in the end it became a strategy just to spend the money somehow.

The ‘Vision’ document is, pleasingly, very clear that this old strategy of putting ‘nervous’ cyclists on wiggling back routes, where you can easily get lost, is out. The Mayor’s Quietways will be direct and straightforward, and, as the document states,

they will not give up at the difficult places… Where directness demands the Quietway briefly join a main road, full segregation and direct crossing points will be provided, wherever possible, on that stretch.

In other words, quality and usefulness are the governing principles, and money will then be spent to ensure that these Quietways match up. Whether this will happen in practice, of course, is another matter; but the document’s strategy is exactly right.

There are plenty of ‘quiet’ routes in Dutch cities and towns, away from the main roads, but importantly they are just as direct as the main roads themselves. They don’t wiggle around major junctions or roads, they go straight across them.

A ‘quiet route’ in Amsterdam – the northern exit of the Vondelpark. Direct, cycle-specific crossing across major road

The southern entrance of the ‘quiet route’ across the park. Same wide, direct crossing

And the ‘quiet route’ continues out into the suburbs. Straight and direct, across cycle-only bridges and along segregated tracks, even here on already quiet streets

This is what the ‘Quietways’ in London should look like; routes that are safe and pleasant to use, but do not lose any of the advantages of directness that you would have cycling on the main roads.

Unfortunately the early signs are that Sustrans’ ‘Connect London’ project will not look like this; they will not have the directness or convenience suggested by the words in the Mayor’s Vision document.

A snapshot of Sustrans proposed ‘Connect London’ network in South London, in green. Note the contrast in directness with Cycle Superhighway 7, in blue.

As Christopher Waller commented on Twitter, the Connect London proposals

look more like a set of postcode boundaries than a network map.

Exactly right. But why does it look like this? At a guess, because usefulness and directness appear to have been sacrificed in order to create, in Sustrans’ words, ‘the world’s biggest cycle network.’

Sustrans want £80 million spent, over the course of 8 years, to construct this network of ‘over 1000 kilometres’. But the amount of money they are asking for to construct this amount of network does not fill me with confidence. Quantity of network is no substitute for quality – 1000 kilometres of meaningless network is 1000 kilometres of meaningless network, regardless of how much of it there is. We already have hundreds of kilometres of ‘quiet network’ in London, which amounts to very little because it is inconvenient, indirect and not very useful to anyone actually wanting to get somewhere. David Arditti again (writing about a ‘Greenway’ scheme in Brent) –

Apart from the fact that it has made practically no progress, in my view, this entire concept is wrong, of attempting to push cyclists onto obscure, un-useful byways. Large-scale popular cycling will only ever be achieved by giving people on bikes direct, convenient, safely segregated routes on main roads, as they have done in the Netherlands, Denmark and Germany.

Now of course we need ‘Quiet Routes’ alongside those safe and pleasant segregated routes on the main roads; Sustrans are quite correct to argue that their project should be seen alongside what might be called ‘Superhighways Plus’, or the new approach to cycling in main roads in London – the segregated tracks which will be appearing on new parts of the Superhighway network from later this year.

But my concern is that Sustrans’ proposals could lead to a worrying watering down of the whole Quietways project, which at least in intent gets things right. I don’t want to see money wasted on fiddly routes that are not useful to anyone. We’ve done that already, and it’s a proven failure. Money needs to be spent doing things properly, or not at all.

We shouldn’t be trying to build “the world’s biggest cycle network” if that network is composed of wiggly circular loops around parks and meandering the long way around junctions. Quietways should not be going down the wrong track.