Conflict between lorries and bicycles

To add to the distressing news of the death of the climatologist Kat Giles on Victoria Street two weeks ago, a young man on a Boris Bike was seriously injured in London last Friday in what seem to be very similar circumstances – crushed by a left-turning lorry, on Grays Inn Road. Both of these incidents are close to home for me – I frequently cycle down Victoria Street, and last Friday’s incident occurred directly opposite the Yorkshire Grey, the venue for Street Talks.

It wouldn’t be appropriate to speculate on the causes of these most recent incidents – just the latest in a very long line of deaths and serious injuries resulting from turning lorry conflicts. However, it is safe to say that human error is one of the most likely contributory factors; a failure of observation, too much haste, a lack of concentration, and so on.

While it is right that much more can and should be done to make lorries safer – better mirrors and warning devices, cabs with better visibility, higher industry standards – the fact remains that human beings are not infallible. They will make mistakes. And that does include cyclists, who will naturally incline to staying close to kerbs, and will consequently find themselves in dangerous positions at junctions (please do read Mark Ames’ excellent guide on this topic).

So for that reason I agree with Danny Williams, that the simplest and ultimately most effective solution is

to keep tipper trucks and people on bikes apart from each other.

One way of achieving this would be a lorry ban at peak hours, which has been mooted, but this doesn’t seem to me to be particularly likely, or workable. Even if it does come into force, there will (or at least should be) plenty of other cyclists about in London at other times of the day. Cycling should not just be about commuting; it should be about going to the shops, or visiting friends, or going out for the evening, or cycling to school – basic, everyday trips that will occur at all times of the day. We should try to protect all cyclists from interactions with lorries at all times, not just commuters. So a peak time ban would only amount to a stopgap intervention.

Truck drivers do not make the best possible use of the different mirrors [and] cyclists insufficiently take account of the fact that trucks have a limited visual field. The ultimate solution for the blind spot problem is a structural separation of trucks and cyclists.

The sad thing is that we should already know how to do this; we have examples of how to keep lorries and cyclists apart. The Netherlands has perfected road design that remove interactions between heavy goods vehicles and cyclists to an enormous extent.

Here’s an example, a busy junction in Amsterdam.

I’m cycling past a tipper truck, the type of vehicle involved in the latest collisions in London. But I will not interact with it at all.

If I’m turning right, I won’t need to go anywhere near the road; the cycle track merely continues around the corner, uninterrupted, and fully protected from the road. If I wish to go straight on, the truck will be held at a red signal while I have a separate green signal. Conversely, when the truck starts to move, I would then be held at a red signal.

Here’s another example of what this looks like, again from Amsterdam. 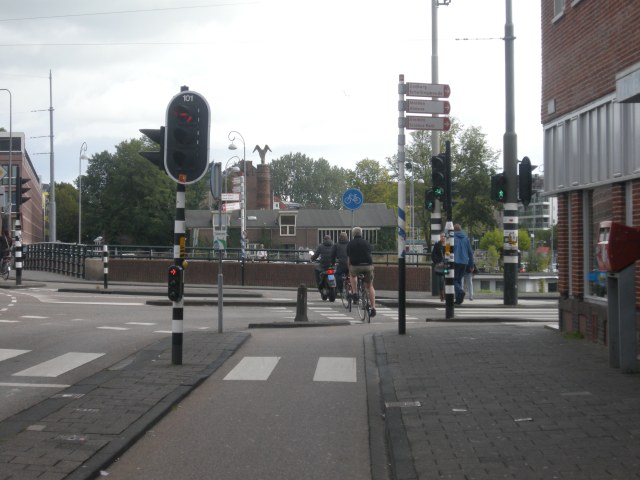 Here cyclists are progressing straight ahead across the junction (alongside pedestrians, who also have a green signal on their crossing). But note, crucially, that motor vehicles wishing to turn right are held at a red signal.

So there is no turning conflict here, of the kind that has resulted in dozens of deaths and countless more serious injuries in London in just the last few years alone. Cyclists are separated in time and space from the movements of motor vehicles, just like pedestrians are.

What I find almost incredible is that we can potentially implement a very good approximation of this kind of Dutch design, right now. The elements are already in place.

We can put motor vehicles on different light signals for different turning movements. We already do this.

Likewise, we can put cycle tracks, separate from the road, around corners. They’re often called ‘shared use pavements’ (our disastrously bad version of off-carriageway provision) or they are poorly-implemented cycle tracks, with confused or dubious priority and separation. We can already do this; we just need to do it much better, with wider, better designed provision for cycling, and with clear priority for pedestrians, where appropriate. 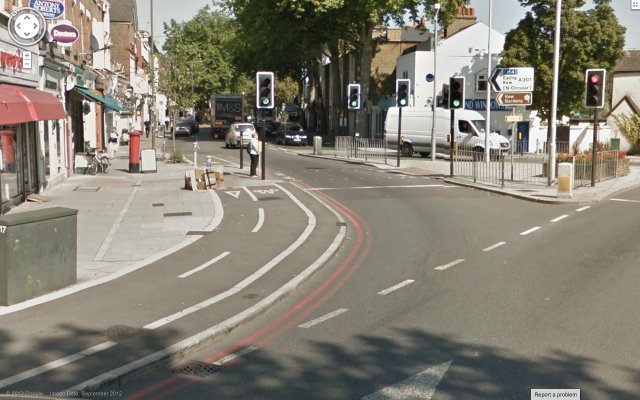 A cycle track around the corner of a junction

And we can let cyclists and pedestrians cross the road simultaneously on green signals; we have toucan crossings. We even attempt to separate the movements of pedestrians and cyclists when they cross, although, again, we do it quite badly.

A toucan crossing at Hyde Park Corner. Technically cyclists should cross to the left, and pedestrians on the right, but the design is unclear and confusing.

My point is that there is really nothing to stop us building a high-quality Dutch-style junction tomorrow. We don’t need to experiment; we know what works, because the Dutch have already done it. We just need to copy it, and do it well. Even better than that, take the things we can already do, and just implement them as well as the Dutch implement them.

When cycle tracks go round corners, make it clear that it is not a pavement, but also provide clear crossing points for pedestrians, where they have priority. 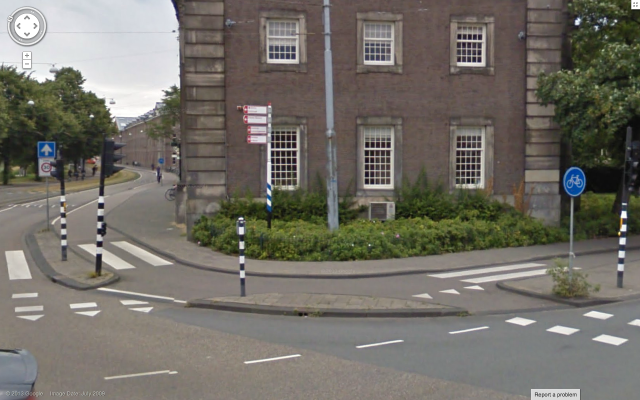 And where cyclists cross junctions with pedestrians, greater clarity is required.

Clear and distinct crossing routes for pedestrians and cyclists; not just a fudge that treats the two as equivalent users

In principle, there’s absolutely nothing stopping us from doing this right.

[hoping] to be able to test what interventions work

as the Alternative Department for Transport blog reports. He writes – and I’m inclined to agree –

TfL would rather figure it all out for themselves from scratch. This is madness – all the research is available from the Netherlands, which went through the learning process 35 years ago (and is still improving its cycling facilities). They made the mistakes so we don’t have to.

In a similar development, Transport Extra magazine reveals that

Transport for London is refining its traffic modelling to improve the representation of cycling and pedestrian behaviour. “Until recently, relatively little research had been undertaken worldwide to understand the behaviour of vulnerable road users at traffic signals and therefore be able to accurately represent them in traffic models,” TfL has told the London Assembly’s transport committee.

“We are leading on a world-first piece of research to understand cyclist behaviour as they discharge from signals and travel between signals. The research will also look at the impact cyclists have on general traffic discharge where they comprise a high proportion of road users.”

TfL says the work is being complemented by TRL research on pedestrian behaviour at traffic signals. “Once findings from the research are received [later this year], the new algorithms for cyclists and pedestrians will be available to update the capabilities of the modelling tools,” TfL explains.

Well, there are already  countries with high volumes of pedestrian and cycle flow at junctions, countries very near to us, so it’s hard to understand why Transport for London are spending time and effort coming up with fancy models when we have real world examples of large numbers of cyclists flowing through busy junctions. The impression being given is that TfL have no idea how cycling works in countries like the Netherlands and Denmark, and that cyclists ‘comprising a high proportion of road users’ is a unique, new problem, requiring new, unique modelling.

What we need to see is an end to bodging, and in its place, bold plans that would privilege cycling as a mode of transport, not just by making it convenient and comfortable, but most importantly of all by making it safe. We cannot go on with road designs which expect cyclists to fight for position with road vehicles turning across their path. We don’t send pedestrians across the road at the exact same time when motor vehicles will be bearing down on them; we shouldn’t do it with people on bikes either.

It is no exaggeration to say that people are dying because we are failing to take action.

15 Responses to Conflict between lorries and bicycles