The AGM of the Cycling Embassy of Great Britain

Just over two years ago, around 40 people gathered in a cafe in central London. The meeting, which had arisen organically and informally out of discussion on a number of blogs, involved the founding the Cycling Embassy of Great Britain. 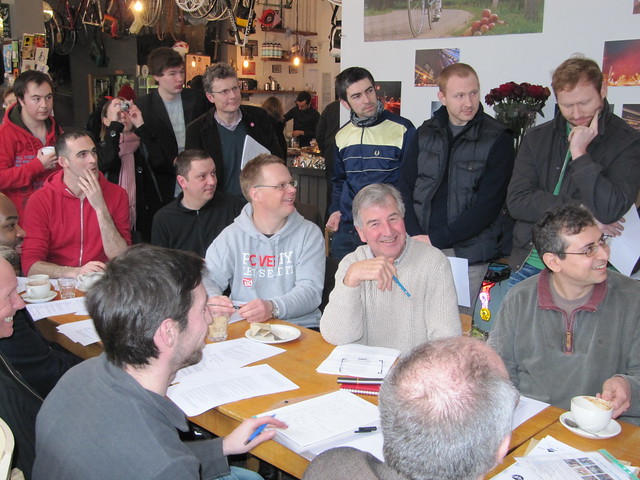 In attendance were founder/chairman Jim Davis, secretary Sally Hinchcliffe, Joe Dunckley of War on the Motorist, Danny of Cyclists in the City, Paul of Pedestrianise London, Mark Ames of I Bike London, Karl McCracken, and many others who plainly felt that things needed to change.

My own particular motivation for attending arose out of a sense of frustration; frustration that the strategies so obviously necessary to increase cycling levels in this country were seemingly being deliberately ignored, disparaged or marginalised, not just by those hostile to cycling as a mode of transport, but by those who represented cyclists.

A bit of background. Since my teenage days I had always been a stereotypical ‘keen cyclist’; short trips were almost always undertaken by bike, on top of leisure riding (including a trip from John O’Groats to Lands End in the late 90s). The bicycle always struck me as such an obvious way to get about, and my spare time was spent trying to persuade friends and colleagues to come around to my point of view; that although it seemed ‘dangerous’ it really wasn’t that bad once you got used to it, and the funny kit I wore (helmet, ‘special shoes’, hi-viz flashes, lycra for longer trips) was necessary, and  ‘odd’ only because a tiny minority of people wore it. If everyone started cycling, then everyone would look like a cyclist, and it wouldn’t be so odd. Although slightly laughable with hindsight, I suppose I was trying to normalise cycling by trying to get everyone else to be like me, even if the feeling, lurking at the back of my mind, that what I did wasn’t actually going to have mass appeal never really disappeared. But I didn’t know any different.

From about 2005-8, one of my best friends lived in Amsterdam, and I frequently went out to visit him, crashing on his floor after nights out drinking in the Jordaan. I was dimly aware that there were lots of people cycling around us as we walked the streets, but I had no real awareness of why, beyond a vague assumption that the Dutch just ‘loved’ bicycles, and that the narrow, dense street patterns in the city centre made it difficult to get around by car. I had no understanding, at all, of the overall Dutch strategy of mode separation; that is, keeping motor vehicles and bicycles apart from one another.

So when I chanced upon David Hembrow’s blog (it’s hard to pin down exactly when, but probably in 2009) it was completely revelatory. I couldn’t quite understand why someone like me, who (as my friends will attest) was basically obsessed with cycling as a mode of transport, and who had frequently visited Amsterdam, could be so in the dark about Dutch practice, and the quality of their cycling environment.

It wasn’t quite as strong a feeling as the sense of having been lied to, but it certainly felt as if something had been kept from me. I had a vague idea of how a ‘cycle path’ might work, but it always seemed to me to be something that was for slow trundling at little more than walking speed, with inconvenient and dangerous passages across junctions. Part of my attitude was undoubtedly coloured by the fact that most off-carriageway infrastructure in the UK is actually like this, but by the same token I had no real knowledge of how things could be different.

Why hadn’t Dutch infrastructure appeared on my radar before I found David Hembrow’s blog? The simplest answer is that nobody was talking about it. While plenty of effort was (rightly) being put in to disparage UK attempts at ‘infrastructure’, there was seemingly no effort being made, at all, to communicate best Dutch practice, and how it made cycling a comfortable and traffic-free experience. It didn’t appear in cycling magazines, nobody was taking pictures, or presenting it to a UK audience, and showing how it worked. The only exception, I think, was a small group of activists in Camden, but the internet was not as pervasive as it is now, and their ideas foundered on local political opposition and hostility from the wider cycling community.

Cycling campaigns showed no apparent interest in Dutch and Danish infrastructure, and this continued in the period after I discovered David Hembrow’s blog. Even as late as 2010, just a few months before the Embassy was founded, the Dutch and Danish approach was still being disparaged.

There is a long running debate among cycling protagonists about the pros and cons of segregated cycle facilities. They are often hailed as the solution for getting more people cycling. CTC and most local cycle campaign groups are sceptical.

… would [the Danish] approach work in Britain? Are there differences in UK driving culture or law which would need to be addressed before we could embrace continental-style segregation? Or is segregation – leaving most of the roadspace available for motor traffic – quite simply the wrong answer in principle, at a time of growing awareness of the need for drastic cuts in CO2 emissions?

(a passage that is, incidentally, indicative of the problematic attitude of a great deal of UK cycle campaigning; preoccupied with fighting motor traffic even at the expense of the quality of the cycling experience). And – remarkably, given subsequent events – Mark Ames was having to ask whether the London Cycling Campaign was actually in favour of segregation, or not.

It was precisely this sniffiness and wariness about the Dutch approach – a reluctance to come straight out and saying that mass cycling requires the separation of cycling from motor traffic – that meant that the Embassy needed to be founded. ‘Going Dutch’ – an approach that has now risen to prominence in Britain – was not even on the radar.

Of course the cycling landscape has started to change dramatically since early 2011, in a way that I suspect many of us at the first meeting would not have imagined. The London Cycling Campaign chose ‘Go Dutch’ as their campaigning strategy for the 2012 mayoral elections, and their excellent work appears to have led Boris Johnson (and Transport for London) to have a damascene conversion with regard to the way cycling is catered for as a mode of transport.

A tragic event in London brought a national newspaper into the cycle campaigning fold, fuelled by incomprehension that one of their own could be so seriously and arbitrarily injured, right on their own doorstep. Driven by the Times’ editor, the Cities Fit for Cycling campaign evolved brilliantly from an angry plea to keep people riding bikes safe from harm into a much broader strategy of making our towns and cities humane and attractive places, both for cycling and for people in general. Indeed, the recent Get Britain Cycling Inquiry has emerged out of the Times’ campaign, with News International providing funding for the evidence sessions and the report. On top of all that our own Sally has become involved in another excellent campaign, in Scotland – Pedal On Parliament, which goes from strength to strength.

What role should the Embassy play in this new cycle campaigning landscape? Our AGM in Newcastle on the weekend of June 1st-2nd is the perfect opportunity to discuss these issues. It won’t be all talk – there will be plenty of time out on the bike, as we get shown around the city by our hosts, Newcastle Cycling Campaign, and there will, of course, be an inevitable night out on the town. Anyone is welcome to attend and to help shape our future. Do come if you can.