In the wake of the latest cycling death in London, the head of Transport for London’s Surface Transport, Leon Daniels, told BBC News

I think it’s very important we don’t have too much of a knee jerk reaction. Of course, as I said, one cycling death is one too many, but the circumstances for these accidents take a while to come through while all the investigations take place. And I’m sure there’s a whole range of measures that, over time, we will be taking in order to try and ensure cycle safety.

The problem here is that this isn’t just ‘one cycling death’. This is just the latest in a long line of deaths and serious injuries involving people riding bikes in London, deaths and injuries that are increasing in frequency.

Courtesy of Drawing Rings Around the World

To say we shouldn’t have a ‘knee jerk reaction’ rests on an assumption that the death on Monday was a one-off – something unique and remarkable – when in fact it was sadly predictable. This is why protest rides are occurring now, and have been occurring for some time (protest rides like those on Blackfriars Bridge, and the Tour du Danger). People have been stating for many years now that riding a bike in London carries an unacceptable level of risk. This is to say nothing of the people who won’t even go near a bike in London because the roads are terrifying; the simple fact is that cycling in London is objectively dangerous, as well as subjectively so.

The implication of Leon Daniels’ comment is that we should wait for all the facts to come in, and once the facts are established, then presumably we’ll find out that the lorry driver or the cyclist did something wrong; that the driver was going too fast, that the cyclist moved unpredictably, or that one or the other failed to spot the other party. And then we can just carry on as before, without changing anything. Maybe there will be another ‘awareness campaign’, or some trixi mirrors, but that will be it.

Well, this isn’t good enough, I’m afraid. We cannot continue to hold the people driving and riding on the streets of London solely responsible for deaths and injuries, when they are travelling on designs that expect bike users to move across multiple lanes of traffic travelling at 30 mph or more; designs that mix people on bikes with vehicles that can kill them if their operators make mistakes. This is so obviously a contributing factor to deaths and serious injury we simply cannot continue to duck it.

Just last weekend a 90-year-old man died on a road near where I live; he was using a footpath that crosses a 70 mph dual carriageway. I took a picture of this footpath last year, remarking in a blogpost about how dangerous it is.

I think it would be callous to blame the man who died, or the driver who hit him, for this tragedy. The issue here is the design of a footpath that expects people to dash across multiple lanes of traffic bearing down on them at high speed. It is entirely unreasonable to expect elderly people – or indeed anyone – to cross this kind of road on foot. The element of risk and danger is unacceptably high.

In precisely the same way, I think it is entirely unreasonable to expect people on bikes to manoeuvre their way across multiple lanes of motor traffic.

If drivers or people on bikes make errors of judgement, the person on the bike will be seriously injured or killed. There is no slack at all in roads that are designed like this; the margin for error is minimal. (I won’t even focus here on how these roads are exclusionary, and only suitable for a small subsection of the London population to use by bike). It is completely unacceptable, purely on safety grounds alone.

Leon Daniels cannot pretend this isn’t a problem, but, on past form, he seems extraordinarily unwilling to make changes to London’s roads that will make them safe and comfortable for people riding bikes.

Where possible TfL look to widen cycle lanes to two metres, as proposed for the initial section of the northbound cycle lane, however, the constraints of the highway coupled with our duty to maintain a smooth traffic flow in this location have prevented us from widening all cycle lanes throughout the junction.

That is, TfL couldn’t even manage more than 1.3-1.5m wide cycle lanes due to ‘the constraints of the highway’ and the familiar ‘smoothing traffic flow’. This in a location where bikes make up 43% of vehicular traffic at peak times.

There are no ‘constraints’ on such an enormously wide stretch of road, beyond a refusal to take cycling seriously as a mode of transport.

Later in 2011 Daniels was asked about minimum design standards for Cycle Superhighways at a GLA Transport Committee – indeed, specifically about minimum widths recommended by that same Committee. He responded

[There are] loads of lessons to learn from the initial cycle superhighway not just in respect of the superhighway schemes themselves but also the way in which the construction is done and the disruption to general traffic and so on. In just about every case we are looking to – this is a big compromise because, at the end of the day, the carriageway space is fixed and therefore we are trying to squeeze a quart into a pint pot. [my emphasis]

I agree entirely with you about minimum widths and so on. Just in some places, on the ground, practically, we are faced with what we have to do. In many cases – and Members will know some of these – there is a requirement for a certain footway width, the frontages need some space, there are requirements for loading and unloading, we need to keep ordinary traffic moving as well and, therefore, in many cases, we are shoehorning this into a narrow space. I agree entirely with you that a minimum width for cyclists is desirable but, again in many cases, we are stuck with what we can do practically and cost effectively.

The overriding impression from these comments – and from those regarding Blackfriars – is that cycling has to fit in around the margins; that motor traffic has to keep flowing in exactly the same volume as before, and it is cycling that has to give way. Sure, if we can fit in a cycle lane here or there without reducing motor traffic capacity, we’ll do it, but otherwise – tough luck. ‘The carriageway space is fixed’, and all that.

The site of Monday’s fatality. Four lanes of motor traffic squeezed into a pint pot.

But the ‘physical constraint’ argument is absurd. Space can be created for cycling on any street, of any width. The issue is one of priorities, and it seems that Leon Daniels doesn’t think that cycling is a particularly high priority. His latest comments certainly do not give the impression of movement, even following the publication of the Mayor’s Vision for Cycling.

At the moment we have streets designed for fitting as many motor vehicles as possible through them, like High Holborn, where a man died on Monday. Leon Daniels’ ‘pint pot’ is entirely full of motor traffic; the only reason there can be any struggle fitting in cycling here is a refusal to reallocate some of that pint.

And, like Blackfriars, it’s not as if cycling is a marginal mode of transport here either. Just to the east, on Theobalds Road, bicycles make up 64% of vehicular traffic between 7am and 10am, despite the fairly appalling conditions. Doubtless on High Holborn – the continuation of that route into the west end – cycling still forms a significant portion of vehicular traffic. But it is completely ignored as a mode of transport.

Space can and should be reallocated for cycling on these kinds of roads, not just because it is already a significant mode of transport in its own right, but because the current arrangements are objectively and subjectively dangerous. They put users at unnecessary risk, and discourage anyone else from riding.

When private motor traffic is such a minority mode of transport on so many roads in central London, why on earth does it get allocated so much space? Why does it have free rein on nearly every single road?

The Alternative Department for Transport yesterday came up with an apparently bold proposal for closing Westminster Bridge Road to private motor traffic at peak times, so that the road would like something like this, with bus lanes down the centre –

The amazing thing is that these kind of proposals should be regarded as so extraordinary, when in fact – if we really care about prioritising walking, cycling and public transport – they should be precisely the kind of measures a city like London should be taking. Make private motor traffic go the long way round, and create safe and inviting environments for walking and cycling.

Dutch cities are, of course, different from London, but they have been doing things like this for decades. The busy Potterstraat, in the centre of Utrecht, is a bus- and cycle-only road. 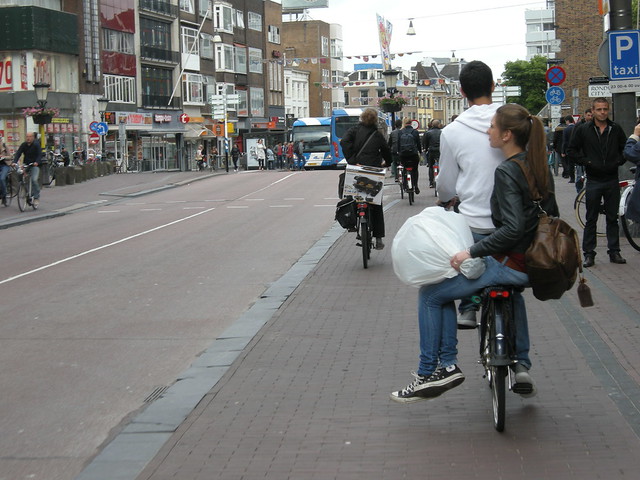 One-way streets for motor vehicles in large Dutch cities are also extraordinarily common, with the space being allocated instead to cycling, and to public transport. 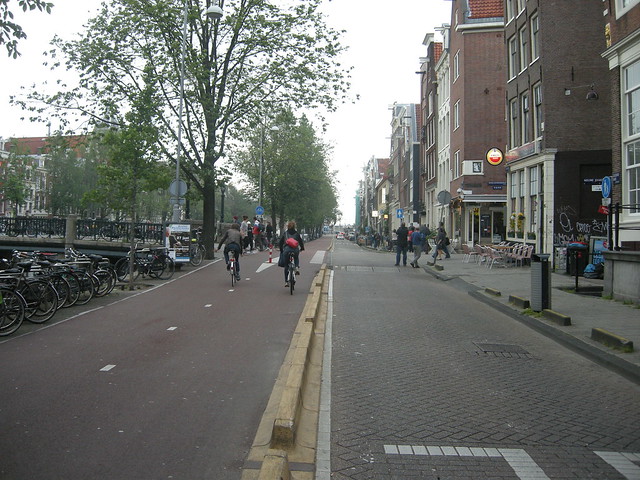 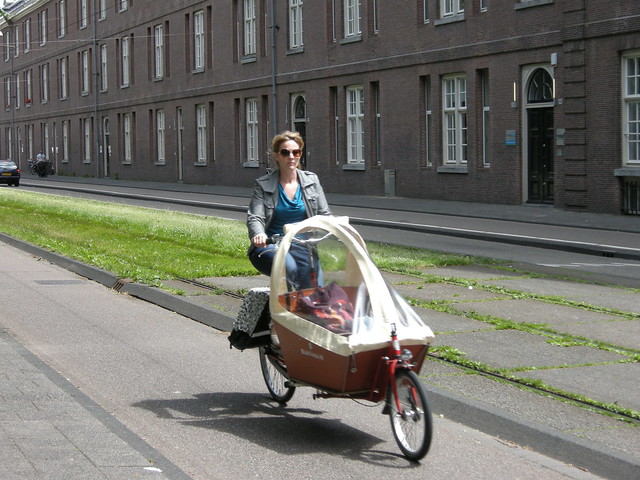 These Dutch roads could be filled with lanes for motor traffic, but decisions were taken about the kind of traffic that should be there, and how it should be treated.

With people on bikes forming such a significant proportion of traffic in central London, even under current conditions, it’s high time that safe, protected space was allocated for cycling as a mode of transport. We already know the circumstances that result in deaths and serious injury on London’s streets – it’s poor design that takes no account of the vulnerability of people on bikes, and puts them at serious risk. To fail to respond to these demands for safety, in the wake of a spate of preventable deaths – to trot out the usual platitudes – would be unthinking, rash and heedless. The very definition of a ‘knee jerk reaction’.

This entry was posted in Go Dutch, Gyratories, Infrastructure, London, Subjective safety, The Netherlands, Transport for London. Bookmark the permalink.