The myth of incompetence

Posted on September 16, 2013 by aseasyasriding

You won’t need me to tell you that John Forester is the ‘father of vehicular cycling’.

One of his biggest apparent obsessions is the notion that cycle tracks and cycle paths foster ‘incompetent’ cycling. He has written, for instance, that

For decades American society accepted incompetent operation by cyclists as a consequence of keeping cyclists out of the way of motorists. The acceptance was tacit instead of explicit; nobody really wanted to admit it, and the laws, contradictorily, both required and prohibited operation in accordance with the rules of the road. Now government demands, as a patriotic measure, that bikeways be installed specifically to encourage a greater volume of incompetent cycling.

At its most extreme, this viewpoint extends to blaming the victims of collisions with HGVs. According to Forester’s logic, it is a failure to ride a bike in his ‘proper manner’ – that is, exactly like a motor vehicle – that has directly caused people to end up under the wheels of lorries in London.

This association of cycle tracks and cycle paths with ‘incompetent’ cycling features in the thoughts of John Franklin, the man who has done so much to introduce Forester’s ideas to Britain. In an infamous letter to John Grimshaw, Franklin wrote

Sustrans has often cited the fact that Dutch cyclists sometimes leave the ferry at Harwich and find traffic so difficult to deal with that they go back home! Interestingly, this problem is not experienced by cyclists arriving from France, Spain or the USA. Proficiency in using roads on a regular basis is essential to maximise safety, and to maximise one’s cycling horizons. I would not like to see Britain on the slope down to Dutch levels of cycling competence.

The concluding word is a giveaway. ‘Competence’ for Franklin – just as for Forester – means the ability and willingness to ride in motor traffic. In this version of events, those Dutch tourists who arrived at Harwich, saw the conditions they were expected to cycle in, then turned around and went home, lacked the ‘competence’ of their British and American counterparts.

Of course, those Dutch riders were in an all likelihood perfectly capable of cycling on British roads – they just didn’t want to. They were competent, but unwilling, a distinction Franklin is apparently blind to. It was the unattractiveness of the cycling conditions that pushed the Dutch tourists back on to the ferry, not any lack of ability (indeed, the unattractiveness of the John Franklin model of cycling has recently been dissected).

Dutch cyclists are of course perfectly competent at riding on roads, as well as on cycle tracks and paths. It is, frankly, completely insane to imagine that the reason some Dutch tourists refused to ride on the main road out of Harwich is because the Dutch nation, as a whole, is worse at riding bicycles than the British or American nation. They just didn’t want to ride in British conditions, any more than tourists wouldn’t want to walk through dangerous or forbidding areas.

On any visit to the Netherlands you will see ample evidence that the Dutch are actually highly skilled bicycle users. They can easily ride along while propelling a bicycle for someone else.

They can give people lifts. 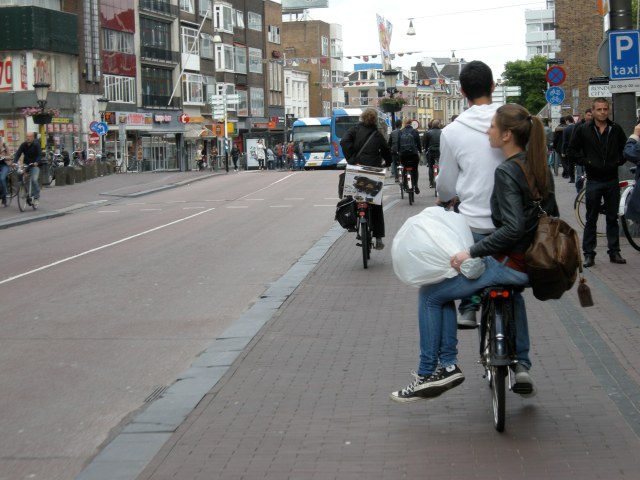 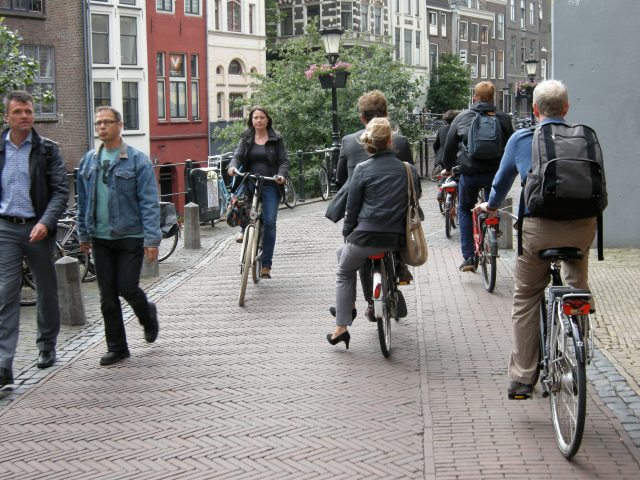 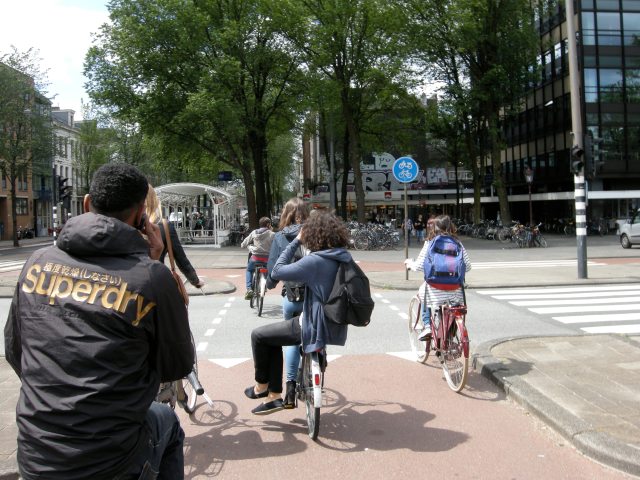 They can ride with umbrellas. 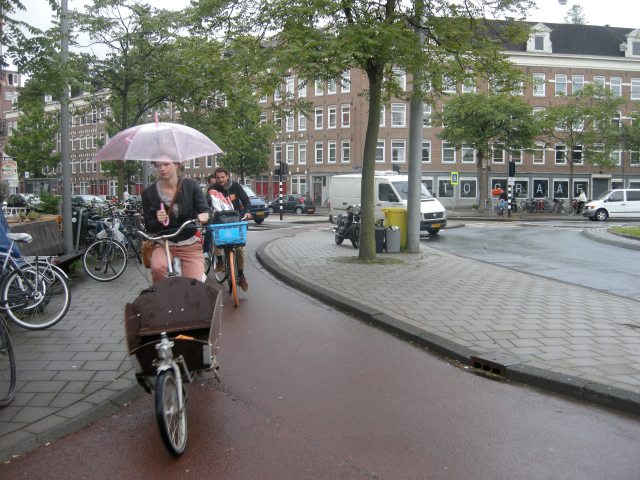 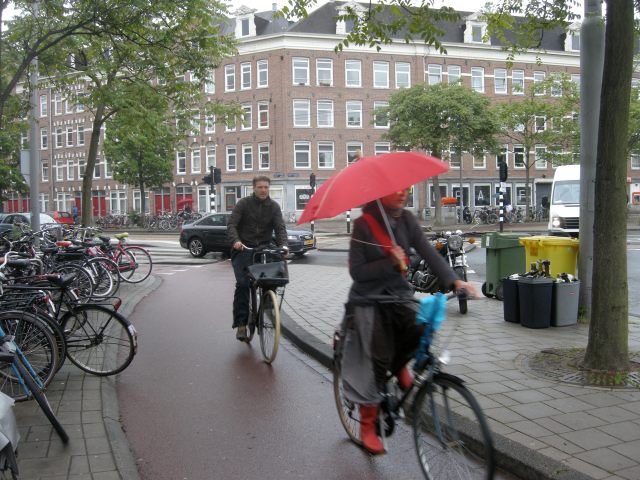 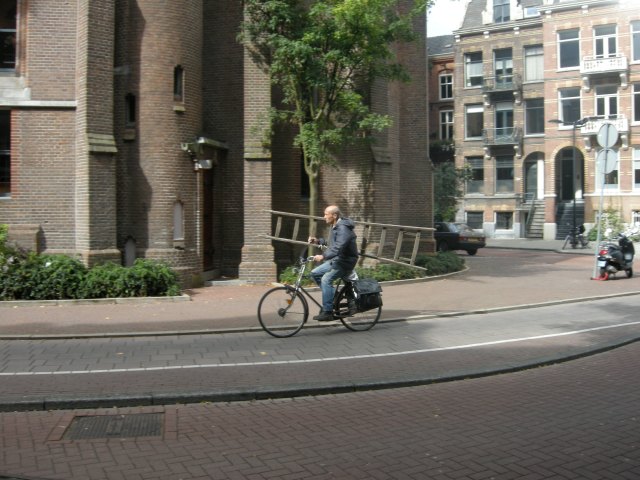 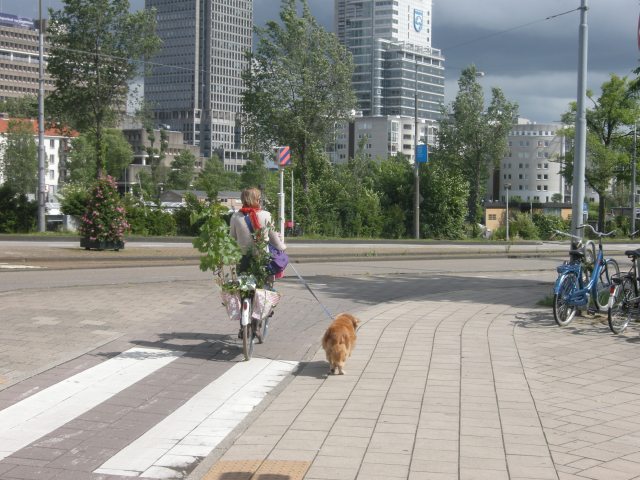 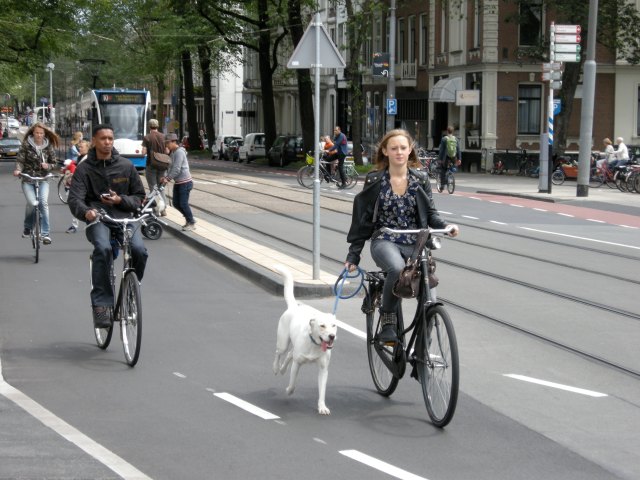 They can even cycle with their dog, with someone balanced backwards on their handlebars.

Are these examples of ‘incompetent’ or ‘competent’ riding?

It’s certainly not the kind of cycling you would want to do in motor traffic, so I suppose it doesn’t conform to the incredibly narrow version of ‘competence’ that Franklin and Forester use. What they really mean when they refer to ‘incompetence’ is an unwillingness to do things their way. I’m quite glad the Dutch are free to be incompetent. I’d like to be incompetent too.

27 Responses to The myth of incompetence