Posted on October 4, 2013 by aseasyasriding

Some back-and-forth on Twitter throughout this week about, allegedly, ‘training versus infrastructure’ (an imagined opposition which I hope this piece will set to rest) has prompted me to attempt to formalise the thoughts on training that have been floating around in my head for the past year or so.

I live quite close to a primary school. Every summer, towards the end of the school year, the pupils are taken out onto my road – a fairly quiet residential street, although still open to through traffic – and are given what looks like Bikeability Level 2 training. About thirty of them – one of the later years in the school, by the looks of it – on their mountain bikes, in the obligatory fluorescent vests, practising turns in and out of side streets.

What effect this has on cycling levels to and from the school is not immediately apparent to me. It is rare indeed that I see a child cycling to it. Perhaps one child, once or twice a week, either on the pavement with a parent riding opposite them on the road, or on the road itself, with a parent acting as a ‘guard’. There are – naturally – a huge number of car trips to the school, at least fifty both in the morning and the afternoon, although plenty of children are walking, or using scooters on the pavement. Cycling, however, is pretty much non-existent.

This is not all that surprising. To get to the school, you will have to cycle on busy main roads, at around half past eight in the morning. These roads are not pleasant, even for me, especially at this time of day, with dense streams of motor traffic and awkward junctions to be negotiated, so expecting children to cycle on them is pretty unimaginable. The natural alternative is to use the pavement, but this is inconvenient, and the option of pavement cycling seems to have been replaced by scooters, which are slower, and seem to allow parents to keep pace, on foot.

So the cycle training the children are receiving is a bit like teaching them how to paddle a canoe on a river, while the river itself remains subjectively hazardous – perhaps it has nasty sections of rapids, or some crocodiles in it. Very few parents are going to be willing to let their children loose on these kinds of rivers – with rocks and crocodiles – regardless of how much canoe skill they have, or how well trained they are in dealing with rapids and crocodiles. They might be highly adept at splashing through the wilder sections, or staring down the crocs, and their parents might be fully aware that paddling to school down the rapids past the crocodiles is statistically very safe, and that the children are actually adding years to their life, but it is simply unattractive (I’m not the only person making these kinds of observations).

My partner is not trained. She can ride a bike, but not very well, having essentially not ridden one since she was a child. She would almost certainly struggle with some of the basic elements of Bikeability 1, like riding with one hand, or riding ahead while looking behind.  Yet on both the visits we have made together to Utrecht in the last few years, she has been able to ride straight across this large and busy city, almost anywhere she wanted to, with only a little encouragement from me. Her lack of ability was no barrier to riding on any kind of street, because she was separated and insulated from motor traffic everywhere we went. This is despite only two days’ worth of riding in the last twenty years. It is this quality of the environment that explains why you see thousands of very young children riding around this city, independently. 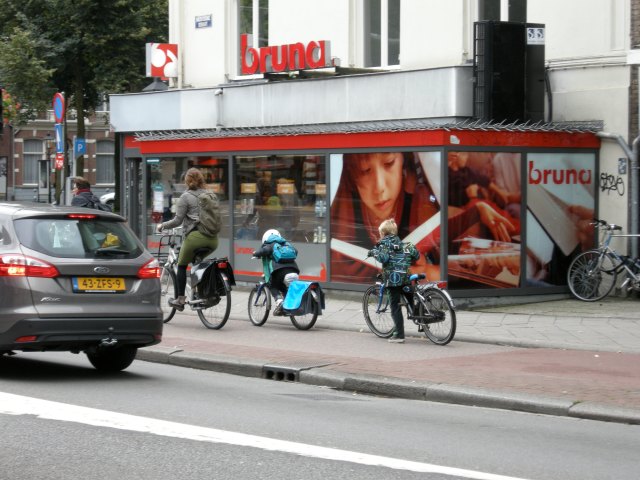 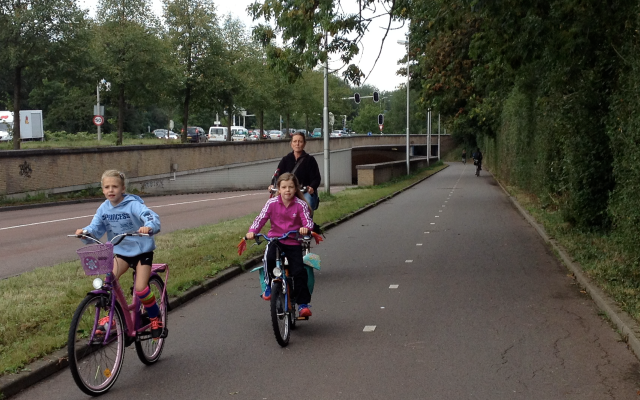 I don’t think willingness to ride without any training whatsoever is limited to my partner. On both of the ‘Skyride’ events I went to this year, in Southampton and in London, I saw very young, wobbly children riding around with everyone else. Their parents were happy to let them ride in these kinds of environments because they were safe, despite their evident lack of competence. 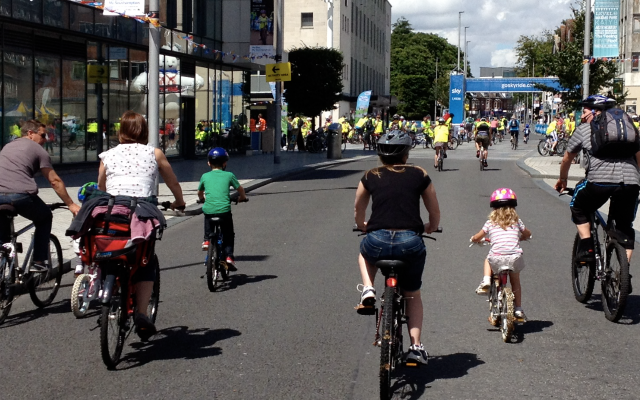 Indeed, I expect many thousands of people on these rides were ‘incompetent’ (in the sense of not having the training or ability to ride with motor traffic) yet were still happily cycling around without incident.

What does this tell us about the relative importance of training, versus the quality of the physical environment? (Please note – as will become clear – that I am not attempting to put the two into opposition). Well, no amount of training is ever going to persuade a considerable proportion of the British population to share roads with motor traffic, whereas, by contrast, a safe environment enables people to cycle anywhere they want to, without training.

In making this kind of comparison, it is certainly not my intention to disparage training. It serves many useful functions, one of the foremost being a ‘coping strategy’ for riding on British roads, and for keeping people who currently ride safe. To give just one example, despite believing myself to be fairly ‘advanced’, I picked up a useful tip when I did Bikeability. I had fallen into the habit of waiting close to the centre line when I was waiting to turn right at junctions, and this gave drivers (bad drivers) an opportunity to turn right alongside me, potentially causing a collision. My instructor told me to wait more centrally to prevent this kind of driving.

That’s not all. Training is also an important way of keeping children ‘in contact’ with the concept of cycling, even if they never venture out onto the roads. Their parents may in all probability have given up cycling, but training in schools will keep cycling on the children’s radar.

In addition, the (admittedly very limited) research on cycle training in Britain seems to suggest that it is effective, at least for those people who are already minded to volunteer for it. And, long-term, it is quite easy to see that training should form part of the school curriculum as it does in the Netherlands. Dutch children are all given essential instruction in how to use their roads, and even have to sit an exam. There is a Dutch Fietsschool.

When people like me make negative-sounding noises about training, they are not arguing against the concept. They are arguing that training, as things currently stand, is not likely to do much to address the current extinction of bicycle use in Britain, and that a focus on training, at the expense of infrastructure that would make certain styles of cycling redundant, is damaging. While cycle training helps people who are already confident, or already inclined towards cycling on roads, it is almost certainly not going to overcome the fundamental barrier of subjective safety that stops the vast majority of British people from cycling on a day-to-day basis. We should be adjusting the physical environment so that the kind of assertiveness and negotiation that forms much of the training undertaken in Britain should not even be necessary.

I know that many people involved in cycle training hold precisely this view. However, it is undeniable that cycle training in Britain is unfortunately bound up, to a greater or lesser extent, with the ideology of Vehicular Cycling. I don’t mean the practice of vehicular cycling, by which people like me quite sensibly mitigate the risk posed to them by drivers, through positioning and technique. I mean the ideology that asserts that cyclists are traffic, and that they belong amongst motor vehicles, and should not be separated from them on infrastructure like cycle tracks, which would represent a ‘surrender’.

The cycle training manual, Cyclecraft, is, of course, written by Britain’s most prominent Vehicular Cyclist, John Franklin. It contains plenty of useful advice, but that does not alter the fact that Franklin is hostile to the concept of cycle tracks and paths, and the separation of cycling from motor traffic. Franklin’s ideology – that the right to continue cycling on all of Britain’s roads should be a top priority – stands in direct opposition to the kind of environment and training that you find in the Netherlands, one where many of the skills taught through Bikeability are redundant. Cyclecraft itself contains the remarkable assertion

which even a cursory visit to the Netherlands will show to be complete nonsense. (I have also mentioned before how Franklin – and similarly-minded campaigners – think Dutch riders are somehow incompetent because they choose not to ride in British conditions.)

Franklin’s views are, in turn, remarkably closely mirrored by some in the upper echelons of cycle training in Britain, who – like him – believe that Dutch-style infrastructure will lead to a ‘de-skilling’ of people cycling; who believe that the road network is universally the best place for cycling and should not be ‘surrendered’; and who also subscribe to the more general view that cycle training – along with other interventions such as 20mph limits and better driver behaviour – will render Dutch-style separation from motor traffic unnecessary.

I suspect that there is a good deal of projection going on here. Because these individuals see training (combined with other interventions) as a way of actually avoiding the need for cycle tracks, when they see discussion of Dutch-style infrastructure, and how people can use it without necessarily needing to be trained, they are naturally inclined to think that it is training itself that it is under attack. This is because they themselves have set up training as a way of rendering cycle tracks unnecessary; their gut reaction is therefore to imagine that promotion of segregation is, conversely, an assault on training.

But this is a mistaken opposition. The country that separates the most, trains the most. The actual dispute here is about the kinds of roads we want to see, and how we design them for people who ride bikes.

It’s not about training.

This entry was posted in Skyride, Subjective safety, The Netherlands, Training. Bookmark the permalink.

54 Responses to On training