Posted on November 7, 2013 by aseasyasriding

This week Lancashire Police have started running a campaign, ‘Let’s Look Out for Each Other’, which amounts to the usual strange attempt to make drivers and people cycling ‘more aware of each other’, as if anyone riding a bike isn’t fully aware of the presence of motor vehicles, often travelling at speed and in close proximity.

Figures show there is a 50/50 split in who is responsible for collisions and we want to highlight the common ground between cyclists and drivers, recognising that 80% of cyclists also hold a driving licence.

A Freedom of Information request has been made by StevenInLeyland, asking for this ’50/50′ claim to be substantiated. As the FoI request states, it flies in the face of other figures from the Transport Research Laboratory, which show motorists are solely at fault in bicycle/motor vehicle collisions in 60-75% of all cases. Thus far Lancashire Police have responded by claiming that their figures relate only to Lancashire, but no references have been produced.

This idea of ‘equal responsibility’ permeates the campaign; indeed, if anything, it seems that responsibility for ‘looking out’ is being placed firmly and squarely on the person riding a bike. This ‘Let’s Look Out for Each Other’ item focuses entirely on people cycling, with some strange tips. How is wearing a helmet going to help the process of ‘looking out for each other’, beyond mitigating the consequences of inattention?

The Lancashire Police Facebook page shows a similarly odd desire to focus on the behaviour of one party. Over the last three days, they’ve been posting these pictures. See if you can spot a pattern. 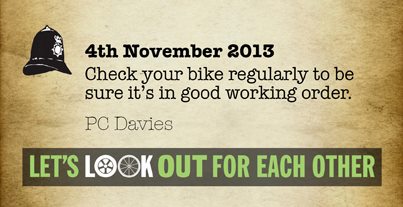 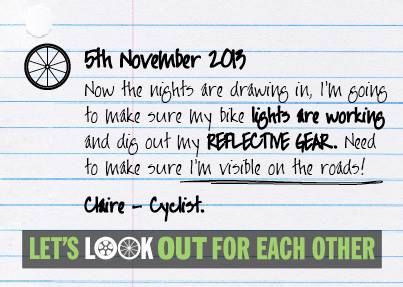 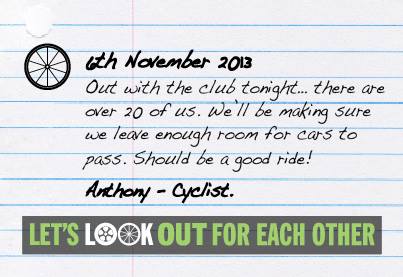 Only one of these – the last – is focused on drivers. The rest are aimed at people cycling, urging them to wear a helmet, get out of the way of people driving, or to make themselves increasingly visible. Indeed, the net effect of these exhortations is actually the opposite of ‘looking out’ – cladding people in reflective clothing is actually aimed at making it easier for motorists to be less attentive.

This entry was posted in Helmets, Road safety. Bookmark the permalink.

20 Responses to Look Out!