Posted on November 21, 2013 by aseasyasriding

A good indication that a design for cycle traffic is compromised is if there have to be signs attempting to tell you how to use it.

This example – where the Superhighway 2 Extension meets the Stratford Gyratory – fits the bill perfectly, with a curious squiggly route, directly you up onto the pavement, then across two signal-controlled crossings.

The sign below is on the approach to the Vauxhall Cross gyratory, on Harleyford Road. If you want to cycle to Westminster, well, it’s quite straightforward, you just go right (somehow finding your way across three lanes of fast traffic going the same way as you), back the way you were coming from, right again, then left. What could be simpler?

And a final example is these proposed signs for a junction in Manchester, spotted during a presentation at the Birmingham Cycle City Expo earlier this year. 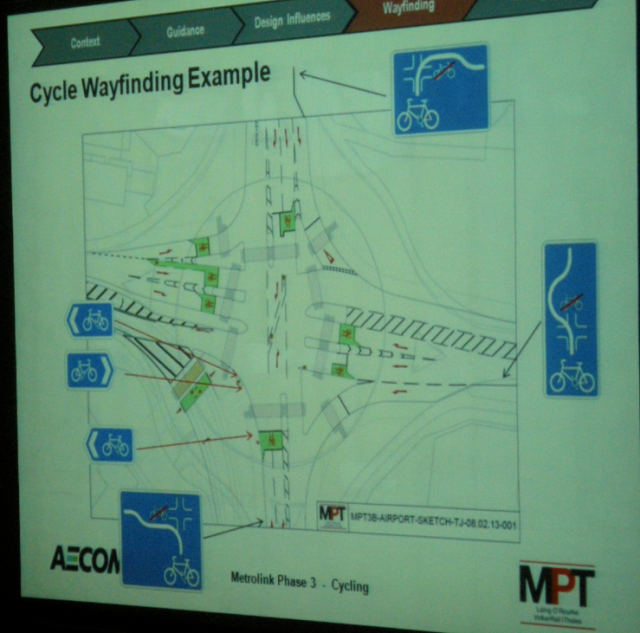 The junction has trams passing through it, and so the idea is to get people to cycle on the pavements away from the left arm of the junction entirely (hence the red crosses running through a bike symbol on the signs). That makes turning right coming from the arm at the top of the picture ridiculously long-winded.

The engineers giving this presentation were, I think, a bit embarrassed about the signs they were asking us to consider. The basic problem seems to be that cycling wasn’t considered as a mode of transport at the time the plans for this junction were being drawn up, and consequently any routes through the junction were inevitably going to be an afterthought, fitted in around the margins, with confusing signs attempting to limit the damage. Amsterdam has plenty of trams, and manages to avoid having to put up silly signs like this for people cycling, because the routes you take through junctions while cycling are obvious and intuitive. Tram and cycle conflicts are avoided through proper design, not by attempting to persuade people to take circuitous and illogical routes, through signage. 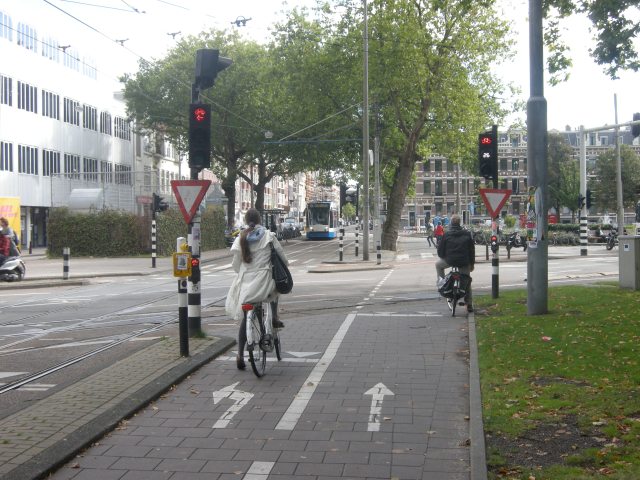 This is much the same story behind the ‘right turn guidance’ issued by Transport for London on Superhighway 2, covered here. Here’s how to do a right turn, as suggested by the TfL explanatory video –

Who on earth expects to make a right turn by cycling beyond the junction, and then looping around through 270 degrees, before rejoining the carriageway? These signs are symptomatic of a failure to take cycling seriously. They should not be necessary if the designs are right.