Not culture, not history – physical change

Posted on December 13, 2013 by aseasyasriding

I was struck by two details from yesterday’s blogpost by Mark Wagenbuur, about early protests for child-friendly streets in Amsterdam in the 1970s – details that highlight the importance of the quality of the physical environment for enabling cycling, over and above any prevailing national culture or attitudes.

The first instance was the contentiousness of the changes being proposed to the streets in Mark’s post. One Dutchman, surrounded by children, argued that it was ‘impossible’ to create a street without motor traffic on it. You can see this in the video, about 2:30 in.

These were residential streets, which now have motor traffic filtered out, as Mark describes in his post. This is an almost universal treatment across residential areas in the Netherlands now, but back then, the notion of doing this was evidently completely foreign to this gentleman. These streets were for driving. (These attitudes were reflected elsewhere in the video, as a man attempting to drive down the street turns violent as his passage is obstructed).

The second thing that struck me from Mark’s post was that while the side streets have now been calmed, the main roads in this area haven’t really changed at all, and are still hostile and unpleasant today, with a seven-year-old girl killed while cycling on Cornelis Troostplein just last Friday.

These details bring home how the Dutch have been through the battles we need to go through. Their marvellous environments for cycling did not appear out of nowhere – they are not some innate condition of being ‘Dutch’. Back in the 1970s, Dutch residential streets and main roads had the unpleasant quality of their British equivalents, and were getting worse. The physical environment in Dutch towns and cities had to be changed. And this has all happened relatively recently.

When I cycled around Utrecht and Amsterdam earlier this year with Mark, and Marc van Woudenberg, they were at pains to point out to me the bad bits of their cities, the areas that haven’t got around to being changed yet. These are quite ‘British’ in their appearance, with no cycle infrastructure to speak of, or that disappears when you need it, or with parked cars that have to be negotiated out and around, and relatively fast motor traffic in close proximity. Principally, these were main roads.

Zeilstraat, Amsterdam. A cycle lane ends just as you approach parked cars, on a busy street

Heemstedestraat, Amsterdam. Another busy main road, with nothing for cycling

Junctions in Amsterdam will occasionally leave much to be desired too. 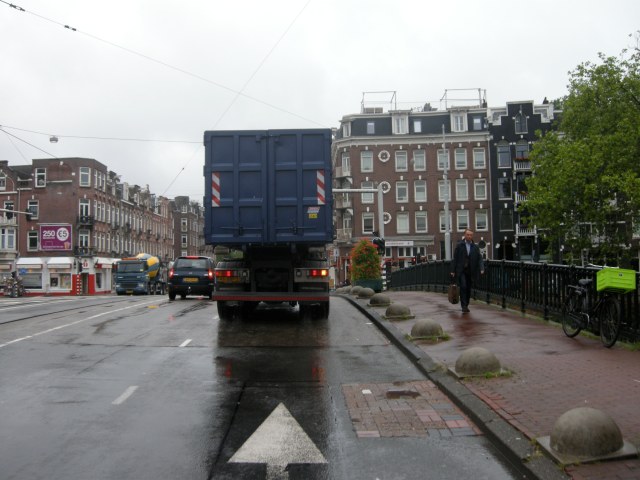 But these aren’t locations that have been forgotten about, or that are seen as acceptable. They are places the city has not got around to fixing yet, or where political battles are still being fought.

In Utrecht Mark showed us a striking example, on Adraien van Ostadelaan. The southern end of this street has cycle tracks, protected by kerbs.

But at the northern end – just a few hundred metres away – this same street looks rather British.

No cycle tracks here – you have to cycle in the carriageway, outside parked cars. The reason is quite simple – the city are waiting for this part of the street to be renewed before they put in the bike infrastructure, as part of the twenty year cycle of renewal and repair. The southern part of the street has been upgraded; the northern part is still waiting, and looks much like it did forty years ago.

There’s another nice example in Amsterdam too, which I found on Streetview. In 2008, Amstelveenseweg looked like this –

The crap roads in Dutch cities are slowly being eliminated, one by one.

The important point in all this is that Dutch roads and streets would undoubtedly be just as hostile to cycle on now as British streets are, if these changes had not been made. Their streets are attractive for cycling because of physical changes, to create safe space.

A long history of mass cycling in the Netherlands would have counted for very little without these changes. Their urban roads and streets would have continued to fill up with cars, and people would have continued to abandon cycling as a mode of transport, as their streets became more and more unpleasant. Children would increasingly have been kept indoors, and would have been driven around, instead of cycling independently. It is emphatically not ‘culture’ or history that explains why the Netherlands has very high cycling levels today, but rather these measures that have been implemented in the last forty years. Without them, the Dutch would have a driving culture rather similar to our own.

Of course it may well prove to have been much easier for the Dutch to have done this than it will be for us. Cycling was still a familiar mode of transport for a larger percentage of the population, and in that sense the Dutch did benefit from their history. But the point remains that these physical changes had to happen if cycling was not to be eroded in the Netherlands, to levels approaching those of anglophone countries. It might even be argued that we have one very specific advantage over the Dutch, in that we can see how their solutions have worked out. Back in the 1970s, closing off streets to motor traffic was clearly particularly radical and contentious, even for the Dutch, and they had no-one else to point to, to show how it could be done, and how it would work. They were pioneers, while we can copy.

Safe, attractive conditions for cycling don’t simply fall out of the sky. They are not the inevitable result of history, or of culture. They have to be fought for, and argued for.

This entry was posted in Car dependence, Infrastructure, Permeability, Subjective safety, The Netherlands. Bookmark the permalink.

52 Responses to Not culture, not history – physical change