The problem with the word ‘cyclist’

Posted on January 22, 2014 by aseasyasriding

The news that the police should use some discretion and not issue Fixed Penalty Notices to anyone who rides a bike on a footway, irrespective of the local context, the type of person riding, and how they are behaving, was predictably greeted with a degree of outrage and hysteria – outrage and hysteria whipped up, deliberately or otherwise, by the British press.

A small part of the problem here is down to the word ‘cyclist’, which tends to conjure up in the mind of the average Briton an image of a young or middle-aged man, wearing odd-looking clothing, and travelling ‘at speed’ (although not faster than motor traffic) – or, failing that, a teenager or ‘youth’ tearing around antisocially on a mountain bike. Giving these cyclists ‘permission’ to ride on pavements is plainly not a good thing.

There are obvious reasons for this association – these are, usually, nearly the only types of ‘cyclist’ most people will see on a day-to-day basis. Other types of cycling – other types of people cycling – have largely disappeared in Britain, thanks to the hostility and/or inconvenience of our road system. 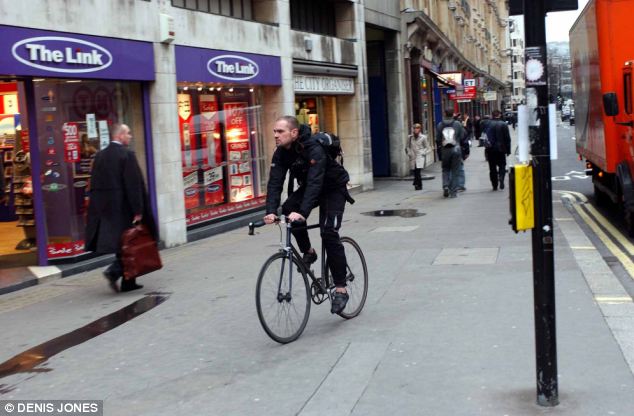 A burly-looking man travelling purposefully on the pavement, which has plenty of people on it. If there is a kind of person who should be on the road – and who probably couldn’t complain about getting a ticket – this is it. Hardly appropriate to illustrate the issue.

The Daily Mail could, of course, have used a different kind of ‘pavement cyclist’ – one like this, for instance.

A ‘cyclist’ on the pavement

This is the kind of discretion that is being advised by the minister for cycling – not forcing young children to share space with motor traffic when they pose little or no danger or inconvenience to anyone walking.

Unfortunately when we hear the word ‘cyclist’ we don’t immediately think of very young girls riding tiny bikes with pink baskets. ‘A cyclist’ is not a child.

But it is this trickiness about the word ‘cyclist’, and what it suggests, that is part of a wider problem. When plans talk of ‘improvements for cyclists’ the public will unfortunately, and inevitably, have an image of the type of people cycling now, not the people who could be cycling, if conditions were right – people like them, or their children. ‘Why are we doing things for cyclists?’ they might ask – why are we doing things for a tiny minority of people, and strange ones at that, who wear funny clothes.

There is no easy way out of this – for us to stop thinking about ‘cyclists’ in this way will require wholesale changes to the way our roads and streets are designed, so that the word ‘cyclist’ will encompass everyone and lose its divisiveness. But in the meantime it’s probably helpful to avoid using ‘cyclist’, when reasonably possible – not because it’s  intrinsically bad, but because it has unhelpful connotations.

Doubtless at some point in the (hopefully near) future we can reclaim it.

This entry was posted in Pavement cycling, Stereotyping. Bookmark the permalink.

48 Responses to The problem with the word ‘cyclist’