Dealing with a historical failure to consider cycling

Posted on March 7, 2014 by aseasyasriding

Way back in the 1970s, Horsham built a stub of inner ring-road, a dual carriageway that was later extended in two stages to (almost) encircle the town centre. It’s called Albion Way.

The remnants of St Marks

and blasting a dual carriageway through a high street, to link up with a new Sainsbury’s, built on school playing fields (you can see the car park by the ‘A’ on the map above).

Frankly, it’s a bit of a monstrosity – overkill, given that it duplicates a bypass that encircles the town. The severance is crap for people walking and cycling, who only have a few places they can cross it, which are (with one exception) pretty awful. 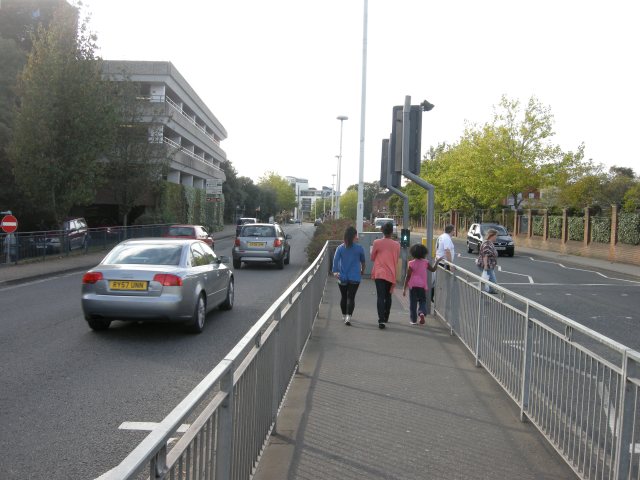 Motor traffic on Albion has consistently fallen over the last decade, and it needs to be resolved. But even in its current form it represents a bit of a mixed blessing. The town planners who initially set about building it were quite clear that motor traffic should be removed and displaced from the town centre – and that has been achieved, pretty well. The area enclosed by the ring road has only one route through it, as shown below.

The route through the town centre

This is a one-way road – all the other streets in the town centre have been pedestrianised, or are dead-ends, or do not form useful routes to anywhere, and are only used for access. And the centre of Horsham as a whole was one of the first 20mph zones in Britain, dating back to 1992. As well shall see, the only route through the centre has traffic calming in the form of humps and a cobbled surface, and  is deliberately tortuous, in an attempt to discourage people from using it as a through route, rather than the longer ring road (although in my experience many people still try).

It’s pretty good, and I have sung the praises of the town centre before, which has been improved further over the last few years by the progressive removal of motor traffic from more streets.

The only problem… is that cycling has been forgotten about.  The town centre is impenetrable from most directions by bike, because of the one-way route through it (that doesn’t have an exemption), and pedestrianisation. There is no useful, direct route across the town from north to south, nor from east to west, nor from west to east. The only route through the town centre is by following the existing one-way street. This lack of permeability is really quite poor.

This may change. West Sussex County Council won some Local Sustainable Transport Fund (LSTF) cash in the last round of bidding, which has to be spent by April 2015 – some of that cash is coming to Horsham, to construct (amongst other things) a cycling route across the town, from the station (which lies to the north of the town centre) through to the south. This will obviously have to tackle the one-way system. 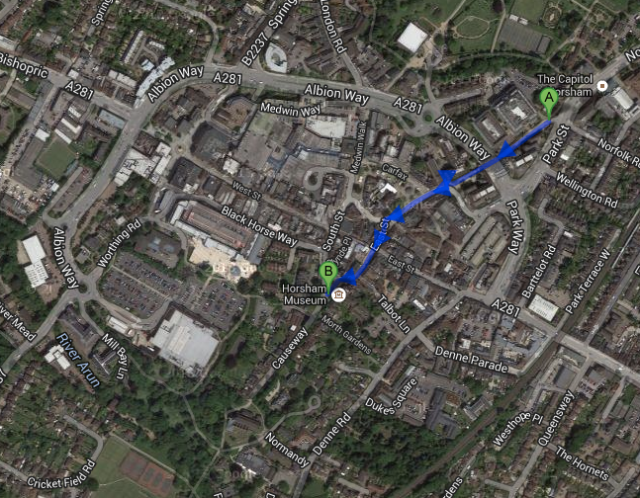 This direct route, from the railway station (to the north) to the town centre, is currently impossible by bike, without taking an unpleasant and/or lengthy diversions

The planned route will come from the station, over the inner ring road on an existing shared walking and cycling route (running along the bridge in the picture earlier in this post). It then arrives in the Carfax, where it is confronted by the one-way road in the centre of the town.

Horsham’s Carfax, looking south. Currently no cycling in this direction

The route will have to run from where the photograph is taken, to the red brick building in the distance. There is a huge amount of space available here, but there probably isn’t going to be much money to play with. That means relaying the street (playing with the cobbles!) to make the carriageway wider is unlikely.

My instinct tells me a simple contraflow would be the most straightforward (and cheapest!) approach – simply legalising cycling in a contraflow direction. But there are issues. The carriageway is not especially wide, and while the volume of traffic is not very high, at all, there are potential conflicts with a loading bay on one side, and a combined bus stop/loading bay on the other. This picture gives some idea of the potential difficulties. 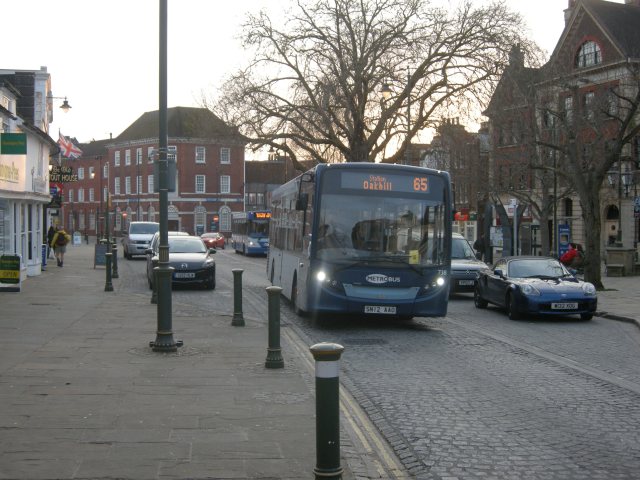 The other alternative is to route the contraflow to the left (as we look at it) of that loading bay, but this is not particularly wide, and would obviously impinge upon walking. It’s probably a non-starter. 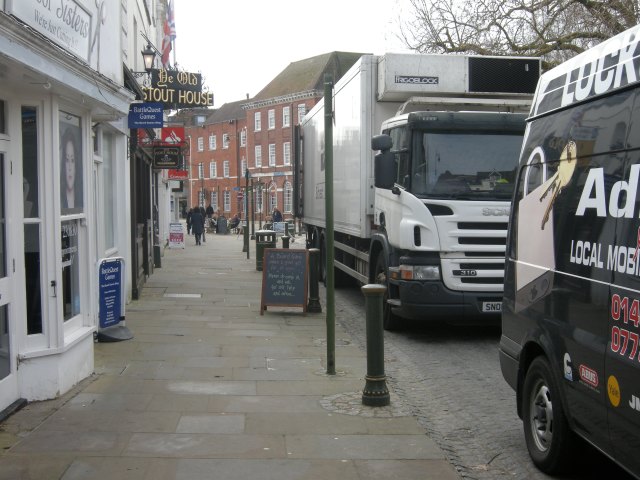 Not a huge amount of space for cycling and walking here

I’ve taken a short video of this section of road, at one of the busiest times of day, 5:30pm. This is when the density of people driving through the town centre tends to be highest – to pick up friends or relatives at the end of the day, to grab some cash from the banks nearby, or simply to use it as a shortcut. This is obviously combined with the buses – the frequency is not especially high, but it could be a problem.

See what you think – it gives a flavour of how difficult it could be to cycle in a contraflow direction, and also how easy it could be!

Outside of the morning and evening, I think a straightforward contraflow could work absolutely fine. The street is very quiet. Indeed, in the evening, and the middle of the day, it can be absolutely deserted. It’s also a low speed environment, with pretty good (by British standards) traffic calming.

But it could obviously present difficulties at peak times. The street is awkwardly designed, as far as two-way cycling is concerned – the narrow bits are in precisely the wrong place. Optimistically, if it is made obvious that there will be people cycling in a contraflow direction to people driving through the centre, my hope is that people will exercise common sense and not crash into each other.

The advantage of this approach is that will cost next to nothing, beyond signage. If, as I fear, it’s not good enough, and people simply can’t behave, then it will have to be changed.

My ideal solution would simply involve cutting out much more of the motor traffic – stopping the use of the Carfax as a route, by installing a bus gate halfway through it. Buses could still pass through (this is an important bus stop, right in the centre), but private motor traffic could not. The roads would be returned to two-way, for all vehicles.

This would stop people driving through, but would still allow access for people loading and delivering, and to the disabled parking bays in the town centre. Indeed, we have already had an (accidental!) trial of this system last year, when the humps in the Carfax were being repaired, and the route was blocked.

The closure of the Carfax to through-traffic – by accident

This closure point here would be the natural position for the bus gate. While these repairs were taking place (for over a month) people could still access all parts of the town centre, but couldn’t drive through. I even have a picture of a taxi driving the ‘wrong’ way down the section of road that will need two-way cycling! 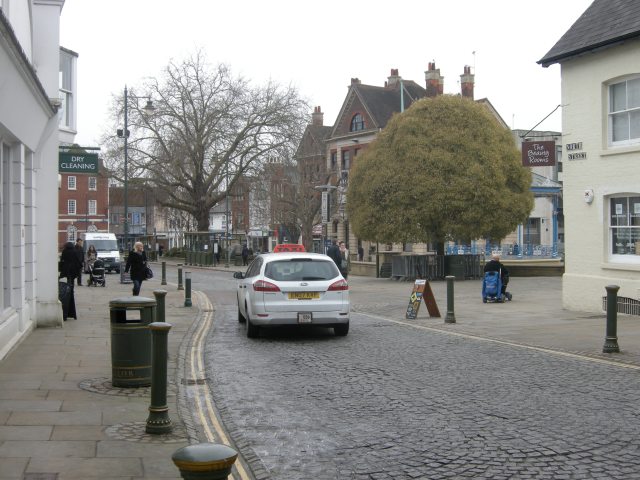 Legal two-way driving on this narrow section of road, during the repair works. This could be the way forward.

This would be the ideal solution, but it would represent a bigger change, all for a mode a of transport that people around here don’t really think exists. It would be a much harder sell. The contraflow would be easier to implement, but sub-optimal.

I’m wondering what you think.

18 Responses to Dealing with a historical failure to consider cycling