This video was doing the rounds on Twitter last week.

It’s really quite well done, and a bit depressing that it dates from 2011. It convincingly shows how a B-road has effectively become a no-go area for anyone not in a motor vehicle, or confident enough to walk or cycle in the carriageway on a fast and busy road. That means short trips have to be made by car; all because a path suitable for walking and cycling has not been provided.

I was reminded of the video while I was out cycling at the weekend, on one of my usual leisure routes. The worst section of it is a B-road that runs into the village of Coolham. It’s a fast, straight section of road with a 60mph speed limit, where for some reason I always seem to encounter lunatic overtakes. Maybe it’s just coincidence, but this stretch of road always fills me with dread, and I exhale with relief a little as I progress through the village, and onto the quieter roads to the north.

What is most alarming is that, just like the B4044, there isn’t even a footpath on this stretch of road.

Watch out drivers – no footway. Oh, and please drive carefully.

Here we have the curiously British approach to road safety – put up a sign warning drivers that there isn’t a footway, instead of just actually supplying one. And, equally, asking them to drive carefully, rather than forcing them to.

As the houses of the village come into sight, we have a ‘SLOW’ warning. But no reduction in speed limit – still 60mph. With no footway. 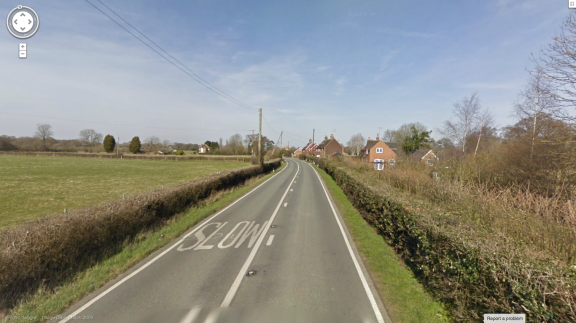 The houses appear. Still 60mph, and no footway.

It is only as the centre of the village appears that the speed limit drops to 30mph, and still there is no footway.

Coolham isn’t a big village, but it does have a primary school, with just over a hundred pupils – William Penn School (named, incidentally, after the founder of Pennsylvania, who lived and worshipped only a mile or so from the village).

Out of interest, I took a quick look at the mode share data from the 2011 School Census, which reveals that 85% of the pupils of William Penn were driven to school. None cycled.

Now of course some of these pupils may have come a distance to the school, from outside Coolham – this is a low-density rural area. But none more than a few miles; the surrounding villages all have their own primary schools. And surely the majority of the pupils will have come from within the village itself, perhaps even from those houses in the pictures above.

If they did, then their parents will, undoubtedly, have driven them to the school, which is less than half a mile away – about 700 metres, door to door, from the house at the very edge of the village. I certainly don’t blame them. They have no choice, forced into car dependency because of a total lack of safe and attractive alternatives.

What was once a quiet country lane has become a fast and busy road, and seemingly at no point during that evolution did anyone stop to think about the consequences for the people who don’t, or can’t, drive.

This entry was posted in Car dependence, Infrastructure, Subjective safety. Bookmark the permalink.

37 Responses to A small example of rural car dependence