Nothing useful to say

Some comment on a detail from the recent inquest into the death of Venera Minakhmetova at Bow roundabout last November.

said she had “nothing useful” to say to Transport for London as the roundabout had since “been altered to such an extent that it’s very significantly safer for cyclists”.

Do I need to point out here that ‘significantly safer’ is not the same as safe enough?

It is true that the approach to the roundabout where Venera died has ‘been altered’, but only because prior to the arrival of the Superhighway Extension there was nothing in the way of cycle infrastructure at this location. 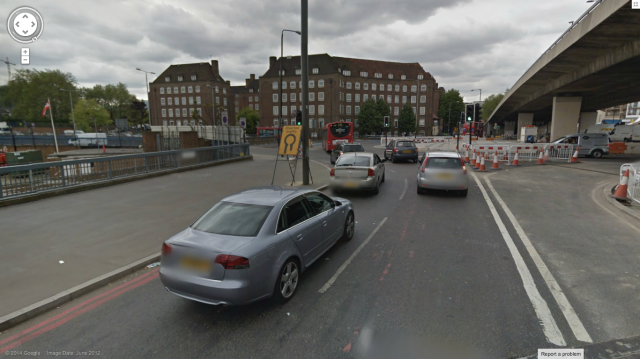 Westbound at Bow roundabout, 2012. Courtesy of Google Streetview. It was on this layout that Lana Tereschenko died in 2011.

But the central issue shouldn’t be whether improvements have been made, or whether the junction is a bit safer than the death trap it was before. Rather than a relative standard of safety, surely we should be looking at whether Bow roundabout meets objective criteria, good enough to ensure that the risk of further deaths, or serious injuries, at this location is as low as possible. ‘A bit better’ isn’t good enough, if what was there before was lethal.

The reported comment from the coroner may, of course, have been stripped from context, but taking it at face value, it appears that this issue has been ducked. Because the new layout at Bow roundabout is not good enough. It is a bad bodge. Effectively it amounts to nothing more than an Advanced Stop Line, with a confusing array of signals that attempt to stop people from entering it at the wrong time.

This video from @sw19cam – shot just two weeks before Venera died – shows just how confusing it can be. Because people cycling have to deal with two sets of lights simply to enter the junction, this chap appears to have interpreted the green signal to enter the ASL as a green signal to progress through the entire junction, with nearly disastrous results, as two lorries bear down on him.

Now the inquest appears to have established that the lorry that killed Venera passed through two green signals before turning left, and on that basis the ‘most likely’ explanation for the collision was that she had passed a red light to enter the ASL. Even if we accept this explanation, questions need to be asked about how easy it is end up doing this, in innocence. This picture from Charlie Lloyd shows the problem.

The red signal to stop people from entering the ASL (to the left) is drowned out by a sea of green signals which, combined with motor vehicles flowing through the junction, could all contribute to this signal being jumped inadvertently. Low-level cycle-specific signals have subsequently been added here, but the overall arrangement is still extraordinarily ambiguous. A standard junction arrangement in the Netherlands (flipped). Absolutely clear who can go, and should stop.

This kind of arrangement would also allow pedestrians to cross Bow roundabout, on a green signal, at the same time that cycles and straight ahead motor traffic have a green signal. There are still no pedestrian crossings at this roundabout.

All the fiddles and bodges that have been implemented at Bow are a flawed compromise, intended to fit cycling in around the margins of motor traffic flow, rather than coherent design. It’s a great pity the inquest seems to have ignored the issue of whether it could be substantially better – good enough to eliminate future tragedies.

This entry was posted in Bow Roundabout, Infrastructure, London, Sustainable Safety, The Netherlands. Bookmark the permalink.

17 Responses to Nothing useful to say