The trouble with our physical environment

A device that offers mobility to people who have great difficulty walking, that is limited to a maximum speed of 8mph, and poses little or no danger (at least relative to other forms of transport like the private car) should never be framed as a problem. Yet somehow the BBC contrived to do so on Wednesday night, with a programme entitled The Trouble with Mobility Scooters.

The tone was set from the very beginning, as a terminally ill lady with chronic lung disease, who could not walk for more than a few paces, slowly reverses her mobility scooter out of the garden, the presenter asks ‘do I need to be worried?’

Throughout the programme the visuals, music and editing strove to create an impression of uncontrolled, reckless or ‘lawless’ behaviour on the part of scooter users. Statistic-free statements like ‘few mobility scooter users give way to pedestrians’ (really?), or that ‘pedestrians on pavements are a common victim of scooter users’ (well, how common?) were a repeated feature of the programme.

Indeed, this was just one of many parallels with the way the media often frames debates about cycling – in this case, presenting a form of transport that in truth poses very little objective danger to other people as some kind of terrible risk that needs to be legislated against. While cycling faces continual debates about ‘road tax’, licensing, and number plates – absurd over-legislation in the face of the actual danger posed, and the benefits accruing from cycling – so the agenda of this programme was clearly one of increased regulation and training,

The other striking parallel – an unsurprising one, given that both mobility scooters and cycling are minority modes of transport, that are not catered for properly on our roads and streets – was in the way mobility scooters are seen as a problem, wherever they are.

And just as the British ‘solution’ to the problems posed by ‘cyclists’ as a group typically involves MOAR TRAINING in an attempt to get us to behave, so the BBC programme would have us believe that the ‘problem’ of mobility scooters can be solved with – yes – training.

At no point in the programme was it suggested, or even hinted at, that the physical environment of our roads and streets could be adjusted, to minimise conflict between pedestrians and scooter users, and between motor traffic and scooter users. The obvious answer to the ‘alien’ issue – that mobility scooters aren’t at home on pavements or the road – is to give mobility scooters their own space, one that could be shared with cycling (fancy that – two problems solved for the price of one). But despite the issue being framed so plainly (if accidentally), the programme didn’t stop to consider it.

The problem, as with cycling, lay with the users and their behaviour, not with the physical environment, or with the danger posed by motor traffic itself.

Witness the patronising ‘red light’ test, as a trainer says ‘well done!’ to a man stopping for a red light in a test centre, which had me wincing with recognition. The absurdity of this kind of test – given that mobility scooters aren’t really a vehicle, and can use the crossing themselves – didn’t appear to occur to the trainers. 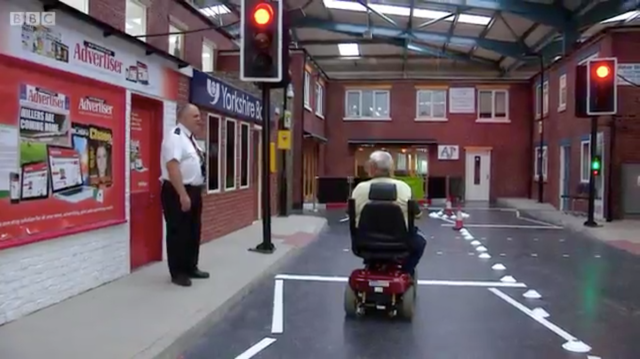 The police officer is then filmed stating that ‘I wouldn’t say that they [mobility scooters] are lethal weapons, but they can cause serious injuries.’

But how many? There are 330,000 users in Britain – at what rate are they injuring people? The programme didn’t supply any answers, merely content to create a vague impression of a ‘problem’, stripped of context, without even the merest hint of a comparison between the genuine danger posed by motor traffic in our towns and cities, and these small, slow vehicles.

Later there was the pitiful sight of an 84-year-old man effectively being admonished for wishing to have some independent mobility, despite his failing eyesight. The idea of making our streets safe for people like this was not considered by this programme, which viewed this man as a danger, showing him ‘jumping’ a red light. Nor did it consider the consequences of denying him the use of a mobility scooter – the prospect of being housebound.

A strong presence in the programme was a campaigner for a compulsory test for mobility scooter users. Her son had been knocked down by a mobility scooter user. Intriguingly, just as (apparently) everyone seems to have been ‘nearly knocked down’ by a cyclist on the pavement, so this campaigner claimed that nearly everyone she knows ‘knows someone who has been hit by a scooter’. Ah, precious anecdote.

This isn’t to deny that collisions can, and do, happen, and can be serious, but the single-minded focus on training, at the expense of any context about the actual statistical danger being posed by scooters, or even more importantly the adjustment of the physical environment so that scooters and pedestrians aren’t forced to share the same absurdly narrow pavements, struck me as completely absurd. In describing the incident in which her son was hit, the campaigner argued that the person on the mobility scooter ‘shouldn’t have been on the pavement’ on a one-way road, which of course hints at the real underlying problem – but the programme failed to address it, or indeed even to recognise it.

The campaigner also argued that scooters travelling at 4mph in a pedestrian precinct were ‘too fast’, apparently because ‘we don’t walk at 4mph’. I suppose that’s a claim that technically can be made, but the difference between this speed and a fast walking speed is so marginal a sensible programme would have asked her what speed she believed to be acceptable, or indeed raised why scooters are limited to 4mph in pedestrian environments in the first place. This programme didn’t.

The problems with our physical environment were even presented to the programme makers on a plate as they followed a mother with multiple sclerosis. It was painfully obvious – to me at least – that her problems with getting about on her scooter were principally due to the awfulness of the physical environment, not due to any lack of training, but again the programme chose to focus entirely on the latter.

Most tellingly of all, a moment when she struggles to bump her scooter down off of a high kerb at a typically hostile British side road –

is framed by the programme as some kind of demonstration of her incompetence, a dashcam filming her wobbling about, out of control.

The programme makers evidently have no idea that junctions need not be designed like this – that they could be easy to traverse for people with mobility problems. Instead they choose to segue into a piece about this mother realising she needs to… get some training!

‘She’s not the smoothest of drivers’, the narrator tells us, ‘so she’s signed up for a course.’

On the matter of whether or not mobility scooter users should be insured, the programme is content with the unchallenged opinion of… the managing director of a mobility scooter insurance company! Clearly someone in a position to offer impartial, considered advice, he tells us that ‘this form of insurance should be made compulsory. The public need protection. And certainly the users of scooters need protection.’

Well, he would say that, wouldn’t he? Unfortunately this is all the programme has to say on the matter, a farcical treatment of the issue.

Solemn music then ensues as the programme talks about the risk users face on the roads. Just as with the failure to appreciate that the problems scooter users face (and cause) on pavements are almost entirely a symptom of our crap streets, rather than a result of bad user behaviour, so, again, the programme makers skip deftly away from the real issues, choosing instead to focus on training. This reaches a peak of absurdity as, following a voiceover about the number of deaths of mobility scooter users, over a montage, including this lingering image 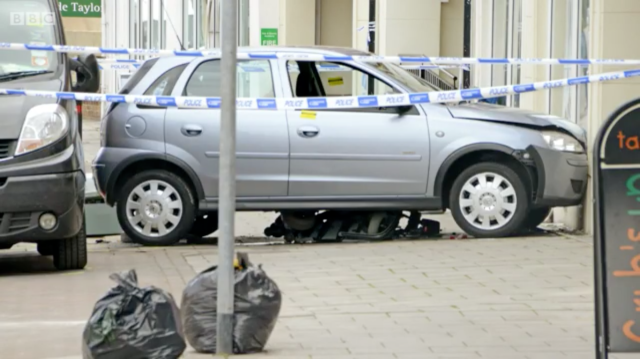 Clearly a lack of mobility scooter training to blame here

… we go straight back to our compulsory proficiency test campaigner, who uses the deaths of these people to argue her case, which is more than slightly distasteful, given that there is no analysis of how these deaths happened, or whether compulsory training would have made any difference at all.

She has, however, received a response from the Secretary of State for Transport to her petition for scooter users to be given compulsory testing, which she reads out –

We have no immediate plans to make [testing] mandatory, because we lack comprehensive evidence that the use of a mobility scooter vehicle as a whole is a major public safety concern.

This is the only evidence-based piece of discussion in the entire programme.

The campaigner is infuriated that the Department for Transport, rather than using her anecdotes and small petition as a basis for policy, have chosen instead to rely on actual evidence – but the silliness of her position is, again, unchallenged. Her concerns are presented as well-founded and serious, with silence, followed by solemn music.

A programme like this could have been a genuine opportunity to assess the problems of mobility in Britain for those who can’t drive a motor vehicle, or who choose not to. But instead we were served up dross, a patronising programme that ignored the serious issue of how a poor physical environment needlessly creates conflict, causing huge problems for a vast swathe of the population who are forced to choose between crap pavements and highly dangerous roads. Rather, it chose to ridicule some of its subjects, adding ‘wacky’ music to their attempts to get about safely, while striving, transparently, to present them as some kind of serious problem.

The parallels with attitudes to cycling were unsurprising, given the similarities between these two modes of transport – ‘problematic’ only by virtue of the fact that they have been neglected and ignored.

This entry was posted in Absurd transport solutions, Road safety, The media. Bookmark the permalink.

24 Responses to The trouble with our physical environment